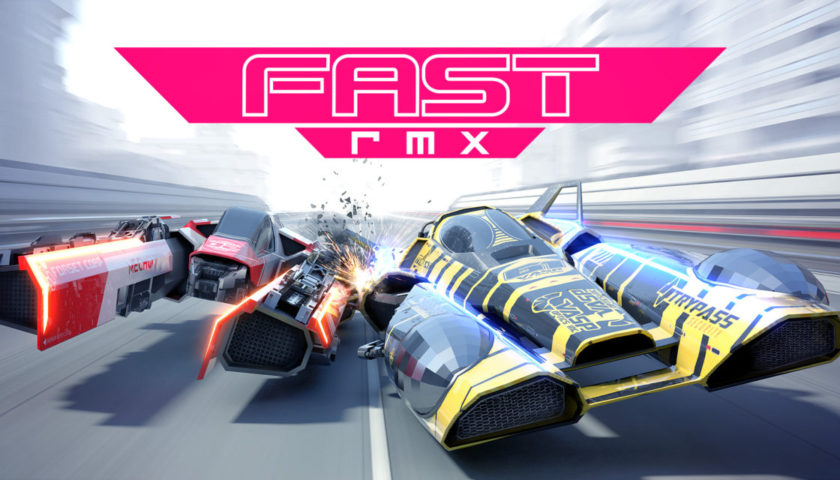 It is no secret that the Switch launch library is a little anaemic. Apart from Zelda there isn’t much to grab anyone’s attention. But somehow a golden little title managed to slip through the hype cracks and get launched with the new console. This title is a evokes feelings of Wipeout and the long absent F-Zero and just like those two classic titles, this one revels in insane speed. The game is Fast RMX.

Fast RMX actually started life as a Wii U game but this version has been ported to the Switch with a host of new tracks and hover cars. There are 30 tracks and 15 cars in all to unlock giving more variety than most arcade racing games. The gameplay structure is similar to that of Wipeout, or even Mario Kart. Play a championship (3 races), unlock new tracks and vehicles, rinse and repeat. It is a time honoured framework that has been working for console racers since the dawn of time and it once again works well here.

All of that content is worth squat if the racing isn’t up to snuff, but thankfully this is not the case. Fast RMX, like the famous games it borrows from, gives players a wonderful sense of speed. White knuckle, gravity defying, super boosting racing awaits and it is a joy to participate in. The feeling of barely being in control at 600mph+ is an exhilarating one and is almost worth the price of admission alone. The Enemy AI is also ruthless, cunning and wants to win just as much as you do. This makes for some intense cat-and-dog racing that is sure to keep you enthralled

The tracks themselves also sport great variety. Deserts, cities, glaciers and even outer-space are represented well, with each track sporting its own challenges. Boosting on these tracks takes a little deviation from the norm. Car’s engines can be changed from orange to blue with the flick of a button and if the colour of the engine doesn’t match the boost pad on the track, not only do you not get an increase of speed but you momentum is almost completely stopped. Thanks to this simple design change, knowing the track becomes even more essential as these boost pads are the difference between first and last position.

The couch multiplayer also works well. We tested the game with two people using Joy-con’s and another using the Switch pro controller. The split-screen looks fine and the game doesn’t seem to suffer frame-rate wise due to the extra activity. It is a great game to play with a group of friends and it is easy to see it becoming the defacto Switch party racer until Mario Kart is released. Online multiplayer is an option but sadly it was a wasteland and we simply couldn’t get a game. Shame.

In all, especially considering the launch lineup, Fast RMX is an essential purchase for anyone that likes a racer. It has a surprisingly large amount of content, excellent couch co-op and exudes a sense of speed that is second to none. With a price of $30 Australian dollars it certainly won’t break the bank either. Fast RMX is an approachable futuristic racer that everyone can enjoy and what better way to bring in a new gaming system than with a game like this.