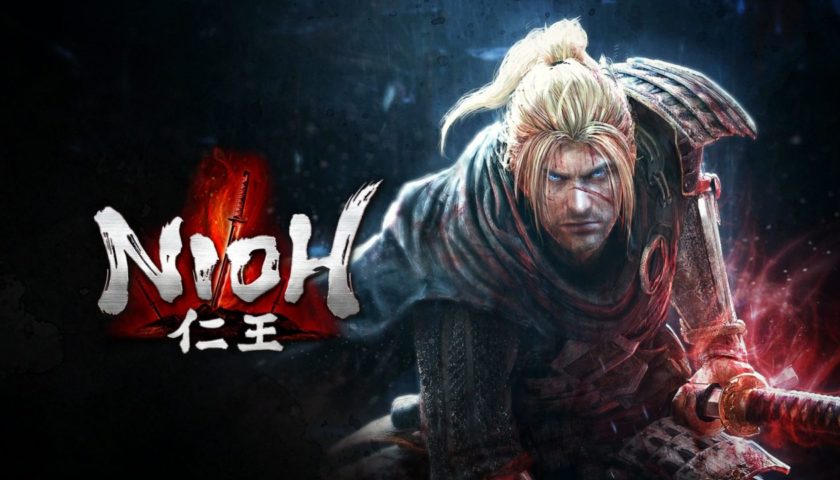 I took a low stance as I walked towards the Yokai Realm that swirled undisturbed in the middle of the room, sword in hand, ready to react to any movement or surprise attack. As I stepped closer the Yokai flashed to life, standing tall, wide and wielding an axe that would surely end me if it were to come down on its target. The beast charged, raising its weapon before violently slashing at the space in between us. Spotting the tell, I dodged hard to my right before counter attacking with multiple fast blows. The energy spent by missing its first attack, then suffering my counter, brought the Yokai to its knees, by which time I thrust my sword through its back, doing massive damage but not enough to end it.

After clawing itself back onto its feet it landed a massive blow that sent me flying as I clumsily rushed in to attack before I was ready. My health took a battering, but the Yokai’s power had dropped again; another blow would stun it, giving me the chance to take it down. I took my shot and landed a killing blow, taking off the Yokai’s arm in a flurry of orange blood and flashing loot as it slumped to the ground. The tension that filled the air moments ago had turned to relief as I cleared the loot from the floor and made my way to the room’s exit. As I calmly walked through the door I realised I hadn’t yet healed myself, but before I could press the shortcut button for my elixirs, a skeleton warrior lunged with a spear from around a blind corner, piercing both my relief and my torso, dropping me to the ground.

It would be irresponsible to not make reference to the fact that Nioh is about as ‘Souls-like’ as it could possibly be without actually being named Dark Souls. In fact, I agonised over how I could go about letting a game like Nioh stand on its own, in this very review. It’s taken me a little while to realise that while Nioh is a game that does a lot of things very well: the feel of the combat is excellent, the loot system is deep and it tells an intriguing tale to boot, it’s also far too derivative in too many key areas to not feel some frustration.

Annoyingly, it does a lot of those derivative things very well, which makes reviewing it hard because on one hand, we have a very good game indeed, but everywhere it takes a step forward, it also takes a step to the side and then backwards again. So instead of feeling like a legitimate lift from what it was that made From Software’s games so good and unique, it just side steps, slotting firmly into place next to the others as if to say “Hey, we can make a game like this too, see!”

Take the combat. The inclusion of the high, mid and low stances lets you change up your styles on-the-fly between power, defence and speed focused moves. It gives an extra touch of strategy to your approach between fights. For a larger, slower foe you might switch to a high stance, making your attacks slower as well, but more powerful too. The inclusion of the enemy stamina metre lets you know when to move in and when to stay away, as well as when they might be open to a stun attack. Then you also have your Ninjutsu and Onmyo magic skills which offer further enhancements by way of different combat moves and buff or protection spells. It’s deep and complex but works so well that I get incredibly frustrated when I think about the ways in which Team Ninja mute it through frustrating level design, uninteresting enemies and cheap tricks.

Far too often is the player exposed to blind attacks from enemies that are perched right on the edge of a corner, or down a tight, unsuspecting alleyway. The nature of each level is that of a linear path that loops back around on itself once or twice, so you’ll only ever fall for the same thing once, but it happens so often that it becomes more like hearing the same joke over and over again. It feels a bit cheap and not necessarily as clever a challenge as perhaps Team Ninja might’ve hoped.

Thankfully the repetitive structure is negated somewhat by a robust loot system that is almost as deep as the combat it supports. You’ll find weapons and armour of all types, and you’ll be expected to mix and match often. A willingness to change up your armour on a mission to mission basis feels key to making good progress through each mission.

The bosses that guard the end of each mission vary from engaging and aggressive to outright ridiculous, sometimes flying in the face of the ‘suggested mission level’ like it’s not even there. Even for a Souls-like, Nioh errs on the grindy side of progression, though thankfully the loot system helps to bear the brunt of that extra baggage.

One area where Nioh shines is in its story, and it’s here that it finally deviates from the Souls school of game design, offering both cutscenes and conversation sequences in a more traditional style. It’s good, too, telling the story of William Adams, a man on a mission to find his Guardian Spirit, Saoirse, after it was taken from him during his breakout of the London Tower. Set largely in feudal Japan, the missions in Nioh take place in and around the remnants and ruins of recent clan battles. The setting itself is intriguing enough to evoke a need to know more, and thankfully Nioh is more than happy to fill you in on the details.

Ultimately, Nioh IS a good game in many ways. The combat is tactile and purposeful and the story is one you’ll want to see through, but the grind to do so is long and frustrating one. It fails to take advantage of the way it successfully alters the formula by failing at others and, in doing so, doesn’t end up hitting the heights of the game it derives from so heavily.