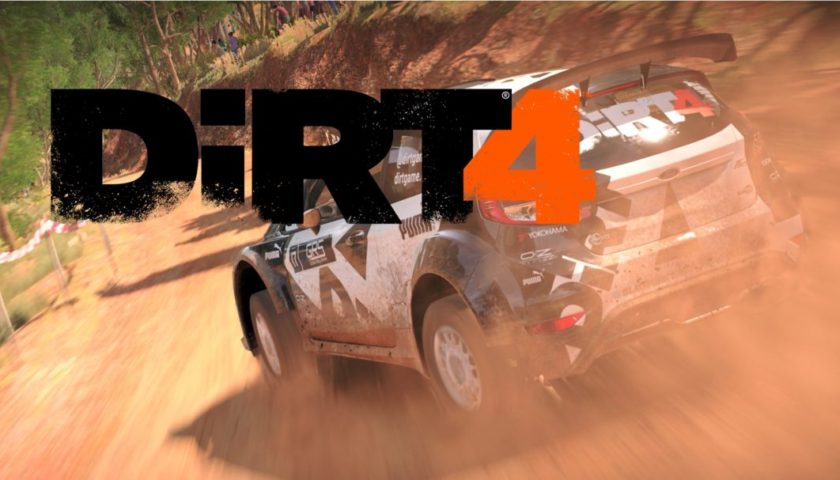 I was just shy of the halfway mark through the stage when, as the car rested itself back on the ground after topping a slight crest, I heard a sharp twang from the right rear. The sound of metal on metal. Not good. I could feel it in the car, the rear felt horrible over bumps and through left-hand corners. I had no more restarts available, so I had no choice but to ease the car home, ending up 8th for the stage. I quickly learned that my right rear damper had failed. A mechanical failure! The funny thing is, had I taken that corner easier, maybe it wouldn’t have broken and I could’ve finished the stage unscathed. It’s these kinds of little surprises that continue to excite me about Codemasters latest, Dirt 4, and takes the rally genre up to yet another level.

When Codemasters went the early access route with their previous rally title, DiRT Rally, they clearly learned a number of lessons along the way. Gone was the attitude and ‘hoonigan’ tag from previous years, replaced with a focused yet surprisingly deep driving experience. With a returning focus towards the traditional point to point style, DiRT Rally won over core rally fans. Its sim-like handling could be tamed through the use of assists, giving it accessibility to casual fans as well as satisfying hardcore racers like myself. However, its tracks were repetitive, often using the same segments of road for different stages, and ended up missing some of the vibrancy that had become synonymous with the DiRT name. But with DiRT 4, not only is it clear that Codemasters learned a thing or two in the years since, but they’ve taken things a step further and produced a rally game that would be worthy of the Colin McRae name itself.

Dirt 4 asks you to create your driver first, before giving you a few lessons in how to steer a rally car. The tutorials are a perfect introduction to the sport for anyone unfamiliar with it, and eventually give way to a sweeping menu that shows off the kind of presentation that you expect from an AAA racer. From here you set out on your career, manage your team—choosing sponsors, managing staff etc—or look over your cars in your personal garage.

Your career starts out in the Rally class, driving slower FWD cars and work your way up the ranks, increasing your experience and driver level as you compete in and finish each event. There are four different styles of racing—Rally, Land Rush, Rallycross and Historic Rally—each with various sub-classes of cars and differing rules. Earning good finishes will earn you credits, which are used to hire new team members or buy new cars for your personal garage, allowing you to compete in events with your own team instead of working for someone else and handing over half your earnings to them at the end of an event.

The traditional, point to point rally stages are still my personal favourite and are all totally gorgeous to look at. With five different regions available to drive in—from the open, red dirt tracks of Australia to the tight, tarmac laden cliffs of Spain—as well as an abundance of different weather conditions that can change during the course of a single run, it’s one of the purest forms of virtual rally driving I’ve experienced. On a few occasions I’d start a run in the dry only to have it start raining during the stage, reducing the road, and my times, to mud. Fog patches can cause a seemingly clear road ahead to get lost in a thick, cloudy haze, reducing visibility to practically nothing. It’s utterly exhilarating to come out the other side of a foggy stage unscathed, especially if you manage to keep your speed up.

Land Rush sees you racing large, heavy super trucks or quicksand buggies around twisty, bumpy dirt tracks with a spotter in your ear to call out other cars positioned on your left and right. Rallycross is similar, though cars are more traditional and tracks are a combination of tarmac and dirt, requiring a deft touch to get around quickly. AI prescribe fairly strictly to the rubbin’s racin’ mantra in Dirt 4, and aren’t afraid of using their car to gain positions on the higher difficulty settings. As expected it can be frustrating when they move you out of the way, but they manage to ride the fine line between racing hard and driving dangerously.

At Dirt 4’s heart is a driving engine that is fun, responsive and as realistic as you want it to be. There are two handling modes to choose from, gamer and simulation. The gamer handling model turns Dirt 4 into a super arcade racer where grip is endless, whilst the simulation models shifts everything the other direction so you. Both are great fun to drive, though clearly simulation takes more work to get to grips with. Thankfully, you can adjust assists like traction and stability control to your heart’s content, allowing you to dial in what works best.

You’ll need to because some of these cars are absolute screaming monsters. Group B cars are as insanely fast as you’d expect; it’s little surprise they were considered part the most dangerous era of Rallying. Other notables include the Rallycross Karts, which feel like a Formula 3 car on a dirt track, and of course the classic Lancia Delta Integrale, one of my favourite rally cars ever to compete. The handling difference between FWD, RWD and 4WD cars is huge, but mastering each is nothing but pure fun.

There is plenty to keep the competitive ones amongst us happy, with leaderboards for every bespoke stage and circuit, as well as various daily, weekly and monthly challenges. Daily challenges might be a stage or two long, whereas the weekly and monthlys often incorporate multiple stages. With no restarts to be heard of, you’ll need head cooler than Sebastien Loeb to make it through to the end, and if you happen to do it within a top percentile of other drivers, not only will you feel on top of the world, but you’ll earn a massive credit bonus, too.

Perhaps the best new feature is something called Your Stage, where you can create a custom rally at any of the five world locations and fill it with stages that are procedurally generated using just a few sliders; length and complexity. I can’t quite express just how well this works. Each stage feels stunningly unique and bespoke, lending Dirt 4 a level of replayability that is beyond expectation. Very rarely have I driven a section that feels repeated and, considering this was one of the biggest problems with Dirt Rally, and arguably racing games in general, it’s a huge step forward for the genre.

Dirt 4 is spectacular, there really is no other way to put it. From the meta of running your own team and how that can affect your car performance, to the sheer variety of surprises that can hit you during a run… it’s just a beautifully dynamic racing experience, which is really the biggest game changer here. Rejoice, for long gone are the days of racing the same, static tracks over and over again. Dirt 4 ushers in a new era of rally game, one that lifts it far beyond anything else out there at the moment. Regardless of your stance on horsepower, Dirt 4 is a game that will make you feel good about sliding around in the mud.