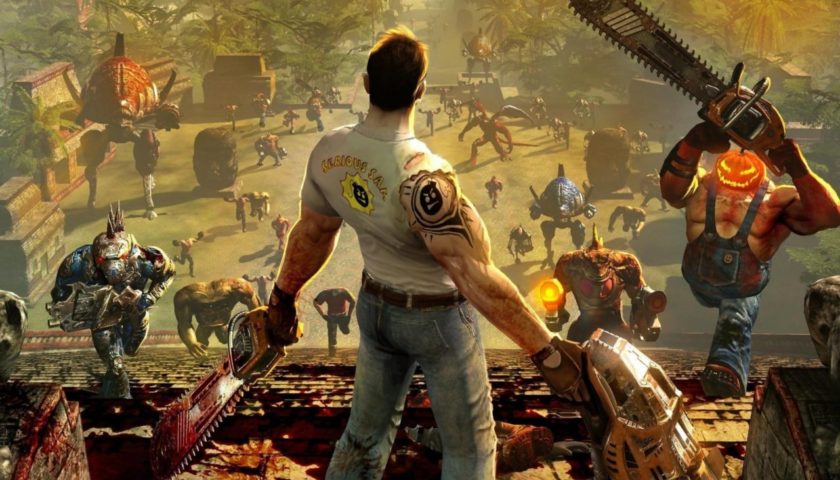 Serious Sam is one of those success stories that makes you smile every time you recount it. Releasing in a time where the FPS genre had moved on from giving you a thousand overpowered guns and tasking you with the duty of mowing down hordes of enemies to reach your goal. Croteam went ‘we should do a game like that’, took the Quake 3 engine and delivered what was an incredibly fun and enjoyable experience whilst practically re-invigorating the genre whilst they were at it. Since then they’ve built an empire off the discount Duke Nukem hero and continued to evolve to the newer technology as it comes about, the latest of which is Serious Sam VR – The Last Hope!

It’s hard to know if this title fits into the story canon at all, but considering the narrative isn’t exactly Shakespeare, it’s hard going to affect the Serious Sam experience ™. Essentially, the human race is still fighting Mental and you’re aboard a spaceship in Earth’s atmosphere (The Last Hope). Naturally, you play as Sam and you complete a series of missions in relation to this. It’s best not to try and make any sense of what Sam is doing in any particular mission because it borderlines B Grade movie scripture and consequently if you’re looking at this title for a good single player experience driven by story, you’ve clearly come to the wrong place.

Serious Sam has always been about guns, big guns … guns that shoot cannonballs (amongst other things). And you’ll need these too because standing between victory and failure are a relentless amount of enemies and things get fairly intense very quickly! First and foremost, you can’t move in this game, Sam’s feet have been nailed to the floor in every mission and all you can do is look around and blast away foes with dual wielded weapons. On the surface, this doesn’t sound entirely exciting and more like a glorified version of the light gun arcade games, we grew up with. But it’s so much more. Each gun has its own feel and you notice later on (when you’re stuck using only a bow and arrow) that every single one requires some familiarity in order to successfully tackle every mission.

The Last Hope can get incredibly difficult at times and knowing what weapons to use and when to use them will mean the difference between beating a level and falling victim to the waves of enemies. However, as you play your familiarity with these tools of death with grow and you’ll know exactly which one to use in each situation, which boomstick gives you the most bang for buck so to speak. It’s this right here that highlighted the actual genius in this title and separates it from a mindless bang-bang-kill-everything experience and keeps you coming back, trying to beat a mission on a harder difficulty, giving you an intrinsically rewarding experience. The more you complete the more you can unlock back at your base which equates to special power-ups and boosts. As an added bonus, Serious Sam VR also supports co-op, online and endless modes, at no point did I feel that all these things acted as filler or something ham fistedly slapped in to lengthen the game.

In the end, this is a solid title for your Oculus / Vive library of games. It’s simple to get into and elevates itself higher than an arcade-like experience. In true Serious Sam fashion, it’s all about the gunplay and blowing Mental’s hordes out of the water. The weapons feel great and successfully completing a mission gives you a good sense of achievement. To put this in simplistic terms, Serious Sam VR – The Last Hope is FUN to play and is one of those games that reminds us why we started playing video games in the first place!