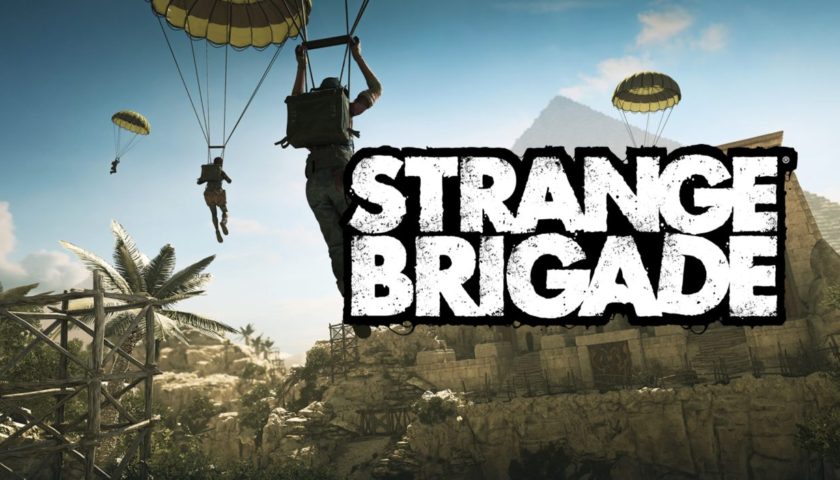 THERE are a lot of games at E3 this year and the Player 2 team have been doing an outstanding job covering the big announcements, the conferences, and all the other excitement such a big event offers.

But there are a lot of very good games that aren’t front and centre but still well worth a look at – and one of them is the 1930s pulp serial adventure-inspired Strange Brigade.

I have been extremely keen on Strange Brigade, developed by Rebellion (of Sniper Elite fame) ever since I saw it last year at E3 and again at the Xbox One X launch, and have been fortunate enough to play a nearer-to-release version at this year’s E3 event as well.

A loving homage to inter-war adventure serials that does not take itself seriously at all, Strange Brigade is essentially a third-person horde shooter wrapped up in the Union Jack while Rule Brittania plays over a phonograph somewhere in the distance, possibly in a tent being used by a colonial expedition.

Needlessly to say I was hooked from the start, and with the game set for an August 28 release my recent experiences at E3 have only cemented this as a must-get for me; it will be available in PC, PlayStation 4 and Xbox One.

The story – brilliantly narrated with humour in period style – involves the four members of the Strange Brigade (broadly, a soldier, an engineer, an academic and a Wayfinder), a specialist group of adventurers who have been called into service to fight Seteki the Witch Queen of Egypt, who was “erased from history and buried in a nameless tomb for 4000 years” but has risen again and is clearly not too pleased with the state of things.

As part of their adventures, the brigade will fight hordes of mummies, ghouls and undead creatures, solve puzzles, find treasure, and generally do all those cool things heroes used to do in Boys Own Adventure-type stories back in the day.

There are two play modes to the game – single player, and co-op. The E3 demo was a co-op session, with four journalists taking on one of the Strange Brigade team roles and blasting and shooting our way through ruins as we searched for the treasure we needed to complete the level. The developers have said the difficulty scales in co-op, there are more enemies and different numbers of certain types to help keep the play balance there.

The four characters bring different skills to the table, so the mix of ranged and close combat styles helped keep the monsters at bay but without requiring the players to babysit each other. How it will all work in a full campaign remains to be seen, but it was certainly a fun experience for the single level we tried.

There are a lot of guns in the game and your powers are further complemented by a magical amulet which, when filled with energy from the souls of your dispatched foes, can be activated to unleash a special ability – such as the soldier’s skill of drawing his service revolver and shooting down six enemies in much the same way Overwatch’s McCree does.

There are far more enemies than you can shake a magical artefact at, of course, so it’s fortunate the levels include an array of traps (activated by shooting) which can be deployed to cut down enemies – from rockfalls to whirling blades to exploding barrels, there’s a lot of ways to fight the undead without using all your ammunition in the process.

Critically, I found Strange Brigade to be pure fun. During one part where our squad detonated a lot of explosives to bring down a cave mouth, the narrator commented “Well, they’re not actually the subtle brigade, I suppose…”, while another successful trap deployment was greeted by a quip from the narrator to the effect of “As I always say, there are not many problems you can’t solve by shooting something”.

From the bright visuals and style through to the uncomplicated controls, Strange Brigade is shaping up to be an accessible and fun ripping yarn adventure which will set itself apart by its unique setting and tongue in cheek style. Rebellion certainly has the skills and background to make this work and it’s clear the developers on the game are passionate about it as well.

I’m looking forward to its August 28 release and can’t wait to see what adventures await.

Royce Wilson is attending E3 as a guest of Ubisoft