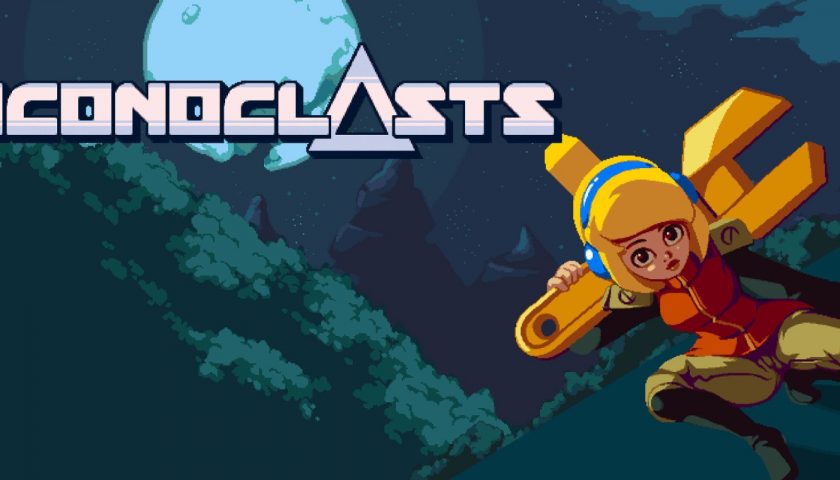 Iconoclasts – The Best Game We All Ignored in 2018

Are we all done with Dead Cells yet? That thing was swimming around in some form of early access for a respectable while before it launched for real back in August. From there, it went from cool looking indie darling to a serious contender on many of the inevitable game of the year lists that rained down as December trudged forward.

I’m going to take a completely safe guess and say that most of us aren’t done with Dead Cells yet. Personally, I just purchased my copy a few days ago. For some other people, maybe they were instead distracted by the explosion of attention that came Hollow Knight’s way after the E3 reveal that it was landing on Nintendo’s Switch. This story makes me happy. It was an excellent PC game, but it never really seemed to catch on, and it’s cool to see it get its due while its developer can still benefit from said sales.

In fact, I’m happy for both of these games – it’s cool to see great design by small teams get rewarded, and these two games (perhaps you could toss in Return of the Obra Dinn towards the end) just seemed to rise to the top as mainstays of my Twitter feed. But, boy, that indiepocalypse sure is here, huh? I mean, you could probably follow that up with a ‘like, duh!’ at this point. It’s been a very long time since Darwinia raised a few eyebrows, since Braid seemed novel, since Audiosurf floated to Steam’s main page, since the first season of The Walking Dead surprised us all. Hell, Telltale has collapsed under mismanagement since then. The release of the Switch brought with it a brief window of time when one could stand out simply by getting a reasonable product out the door. That didn’t last long – have you seen the size of the sale on Switch games that was going on over Christmas?

The indie space is now crowded. Being a small developer is no longer special, platformers are no longer rare, retro is now so common it can barely be called retro anymore, and cool pixel art has somehow reached plague-like proportions. In 2006, I somehow successfully pitched Hyper magazine on letting me review an indie game each month. Some months, it was a struggle to find a title to cover; today, outlets are literally drowning in coverage requests from legitimately talented developers.

Iconoclasts released at the beginning of 2018. A Switch release followed not too late afterwards. Come December of the same year, it was being included as a PlayStation Plus freebie.

Tell me if you’ve heard this pitch before: a new game by an independent developer with a cool pixel art look and Metroidvania structure. Maybe throw a chiptune soundtrack in for good measure. Shit, man, you can’t swing a very real cat in a very metaphorical store and not have it knock itself out on a baker’s dozen of those things at this point. Iconoclasts is one of those. In many ways, it feels like the thirteenth – the unlucky number that is, also, one more than an actual dozen because, I don’t know, people who are good at making bread are also very bad at counting to twelve?*

Iconoclasts released at the beginning of 2018. It released in 2018 after eight years of development. Had it enjoyed a two-year development cycle, it would have launched in 2010 and would have almost certainly been lauded as a shining example of a nearly dead genre, and holy boy check out that pixel art! Ten out of ten, because we’re all still using that scoring system right now. I’ve no doubt it would look and run just fine on an Xbox 360 (it come out as cross-buy for Vita, although cross-save is sadly missing). The only reason it didn’t come out then is because it wasn’t ready. It came out when it was ready, and it came out in a world where it looked far less novel.

So, here’s the thing. I never followed Iconoclasts very closely. I had it on my Switch watch list because I thought it looked interesting. It got a little exposure from some YouTube channels such as Game Grumps, even got favourably reviewed on the IGNs and Game Informers and Gamespots of the world, but by and large, it was just a side interest. Then, it showed up on PlayStation Plus for December (alongside the perhaps even more ill-fated Onrush) and, frustrated with Dragon Quest 11, I downloaded it then and there instead of just adding it to my increasingly bloated library.

But what really stands out is just how smart it is. Player’s take the role of a young woman named Robin who is initially armed with nothing but a simple blaster. A simple blaster with gentle aim assist for angular shooting that will have you immediately wondering why every single side-scroller in existence doesn’t do the exact same thing. It’s a quality of life flourish that just makes so much sense. Same again for pressing down and jump while airborne; Robin will kick a little off to each side if need be. It looks and feels cool, and takes something that could easily become frustrating and makes sure that it remains fun. Oh, and each time you load your last save? Take literally one second to make sure you’re happy with your difficulty selection first. Again, why isn’t this feature everywhere?

I could go on about how well it internalises its story and lexicon is, about how its gentle Metroidvania design only throws a limited number of new tools at you and is more interested in upgrading and better learning to use what you have, how the bosses are consistently interesting and fun to beat. I could throw in the odd example of a rough edge into these points for balance (you may die once before fully figuring out how to approach a boss! Oh nose!), but at that point this would really just be a glorified review, posted with the benefit of playing a game on my own damn time.

And really, this is why it took so many damn words to actually start talking about Iconoclasts. Sure, Iconoclasts is great – it’s going down as my personal gem of 2018, easily somewhere in my overall top five games. It does so many things right, and I’ve found the seven or eight hours I’ve played so far hugely enjoyable. But here’s the surprise twist that most of you probably saw coming a mile off: this piece isn’t really about Iconoclasts. It’s about, well, it’s about… games. We’re freaking spoiled, guys. We are swamped with awesome games: indie games, mega-budget productions about cowboys and everything in-between. It’s about any damn game that deserved more attention but didn’t get it because we’re so damn spoiled.

Spoiled for everything but time, I’d wager. I recommend you give some of it to Iconoclasts if you can, but it’s cool if you can’t. Chances are, you’ve found your own favourite stable of titles that will never get the attention they deserve either. And as I sit here, sipping tea as I try and find a way to cap off what is supposed to be a closing paragraph, I am acutely aware that my recent Dead Cells purchase came at the cost of Monster Boy. The cycle may well never end.

* Actually, it’s believed that this is because medieval laws had laws tying the prices of bread and wheat together, and it’s very difficult to ensure all of your loaves come out the same size so, fuck it, just bake an extra so you don’t end up in an iron maiden or something for tax evasion. History!