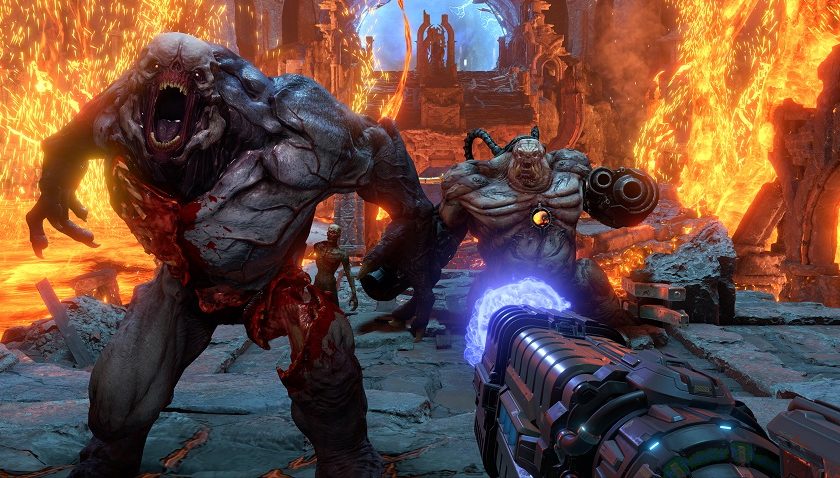 We Are All Eternally Doomed and I Like It

So Doom Eternal was clearly the star of the Bethesda show and really, one of my games of E3. We saw a huge chunk of gameplay at the conference and everything about it screams to me in a loud, death metal sounding voice that says buy me. Well now the show is over we have some new screens, a new trailer and some PR dot points that I wanted to share with you all because brutal demon murder is best shared with friends. Here is the feature list from Bethesda PR.

Gain access to the latest demon-killing tech with the DOOM Slayer’s advanced Praetor Suit, including a shoulder-mounted flamethrower and the retractable wrist-mounted DOOM Blade. Upgraded guns and mods, such as the Super Shotgun’s new distance-closing Meat Hook attachment, and abilities like the Double Dash make you faster, stronger, and more versatile than ever.

You can’t kill demons when you’re dead, and you can’t stay alive without resources. Take what you need from your enemies: Glory kill for extra health, incinerate for armor, and chainsaw demons to stock up on ammo. These tools are the key to your survival and becoming the ultimate demon-slayer.

A New Class of (Destructible) Demon

Obliterate more demons than ever before, each with unique attacks and abilities. Fan-favorite classics such as the Pain Elemental, Archvile, and Arachnotron make their return, while a horde of totally-new demons join the roster including the DOOM Hunter, Marauder, and the Gladiator. Rip apart your favourite demons to the core with DOOM Eternal’s “destructible demons” system and take your power fantasy to new levels.

As the Slayer, allow other players to invade your campaign as demons for a dramatic and unpredictable twist anytime you’re playing the campaign. Or be a demon and invade other players’ campaigns either by yourself or with someone else to give the Slayer a true taste of Hell.

BATTLEMODE is the new 2 versus 1 multiplayer experience built from the ground up at id Software. A fully-armed DOOM Slayer faces off against two player-controlled demons, duking it out over three rounds of intense first-person combat. More details coming soon!

Honestly, my mood at the moment is screaming out for this sort of game. A wanton path of demonic destruction to ease my day-to-day worries. Doom Eternal is coming on the 22nd of November and all I have to keep me going are these new screenshots and trailers… it isn’t enough.