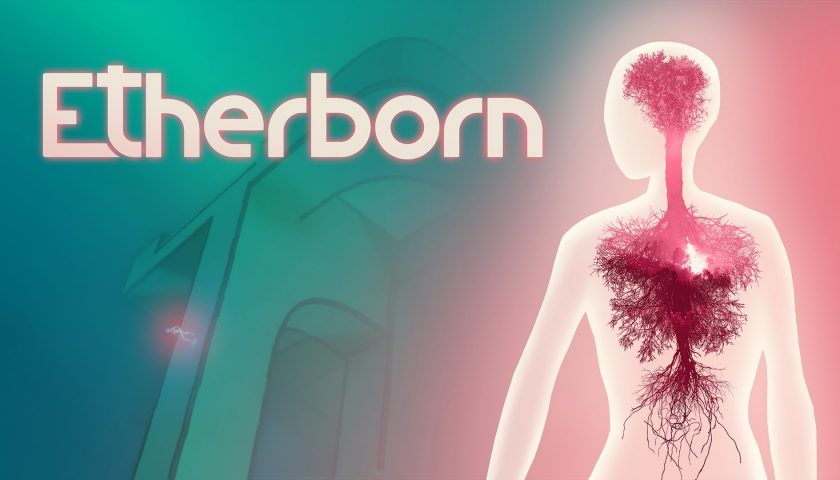 Amidst the flashing lights and hustle and bustle of the AAA side of the industry, it’s easy to lose sight of the innovative, smaller titles that continue to grow our medium and push things in bold new directions. Altered Matter’s Etherborn is one of those such titles which attempts to push the direction of puzzle games through a combination of brain-bending perspective puzzles, Rubik’s cube-like design with a little bit of gravity manipulation layered on for good measure. I was incredibly impressed by the game when I had the opportunity to preview it back in April, but with the full release now available to everyone, my perspective, as it did during the playing experience, has changed somewhat.

I spoke at great lengths during my preview of Etherborn about how in awe I was of the level design at play (and we’ll return to that shortly), but what I neglected to mention at the time, because of what little I could gather from the vertical slice I played. Now that the full version is now available, that aspect can be discussed in a little more depth. You’re a voiceless vessel chasing a disembodied voice, and to reach that voice you’ll need to traverse a series of increasingly more complicated, puzzles that are being pushed and pulled at relentlessly by a most unusual form of gravity. The goal of all this? To understand the reason behind your existence. Whilst a high concept, Etherborn never really strikes a chord with its storytelling due to the game’s brevity. The experience spans approximately 2-3 hours, with 99% of that time being singularly focused on the puzzles and platforming at play, so that 1% remaining, of an already short experience, means that you simply cannot form any sort of attachment to the entity or the story being told with the available minutes you have with it.

Where Etherborn shines is in the core playing experience. As previously outlined, Etherborn tasks you with several Rubik’s cube influenced puzzles that with have your brain overheating as you attempt to safely traverse them. It’s not as simple as not just missing a jump either, the push and pull of gravity is an ever-present help, and hindrance and needs to be properly accounted for with almost every movement you make. Each platform has clear edges, but where stepping off a squared-off edge will result in a likely failure, smooth, rounded off edges can actually be walked on, allowing you to push back against gravity and continue platforming. The camera won’t often shift with you either, so you will then be forced to consider your movements carefully factoring in newly inverted controls, as well as the orientation of the player character. It can get messy quickly, but there’s a lot of satisfaction that can be derived from your successes. Even those who don’t feel particularly fluent with puzzle games will find that with a bit of trial and error, and perhaps 5 minutes of feeling like you’re bashing your head against a wall that even Etherborn’s most abstract of barriers can be overcome.

Most levels require you to collect a defined number of pentagonal prisms that are inserted into different alcoves that then alter the environment somehow. This poses two challenges to the player, the first being identifying them in the first place, which can sometimes be the biggest headache, but then secondly, working out how to traverse the environment to reach them. As the levels get more and more convoluted, the degree of challenge for both of these tasks begins to spike dramatically. The presence of a New Game + mode, should in theory up the ante further with perhaps more complicated challenges within the same spaces, but instead, Altered Matter has opted to simply hide the prisms in foliage or other parts of the environment, making the challenges more tedious, as opposed to more difficult.

The biggest issue that plagues the entire Etherborn experience is its duration. Players will have a prologue and then four, approximately 20-30 minute (on average) levels to proceed through, and just when you will begin to feel as though you’re confident with the systems at play, it comes to an abrupt end. Pushing that number to closer to ten would have made an incredible difference to the game, afforded some time to integrate new systems into the game, and throw up some even greater challenges at the player. In this respect, Etherborn is a massive missed opportunity, because the backbone of the experience is nothing short of superb.

Aesthetically speaking, Etherborn shines. The colour palette is as diverse as it is stunningly implemented, resulting in many of the levels looking and feeling as though they’ve been ripped from some form of a drug-induced dream. Featuring prominently amongst the worlds colour samples are shades of pink, green and blue, a brief sequence during the tutorial presents some particularly stunning looking water, and the mist that lingers on the periphery of each level enhances the mood and feel that the stylistic design decisions are so wonderfully realising. Being a game where you’re in pursuit of a disembodied voice, the simple, yet distant sounds of various wind instruments complement the look and feel of the game perfectly.

Etherborn ticks a lot of boxes. It’s a wonderfully designed puzzle game that presents a challenge to everyone, no matter their level of experience with the genre, it asks you to ruminate on some quite high order topics, and both looks and sounds exceptional. In spite of all of this, you’ll likely find yourself coming away dissatisfied because just as you feel like you’re getting comfortable with the experience, as you feel like you’ve come to understand the rules, or as you begin to derive some meaning and enjoyment from the narrative, Etherborn then comes to an abrupt conclusion. It’s this sudden end that stands to leave a sour taste in players mouths and will make you wonder about what could have been.