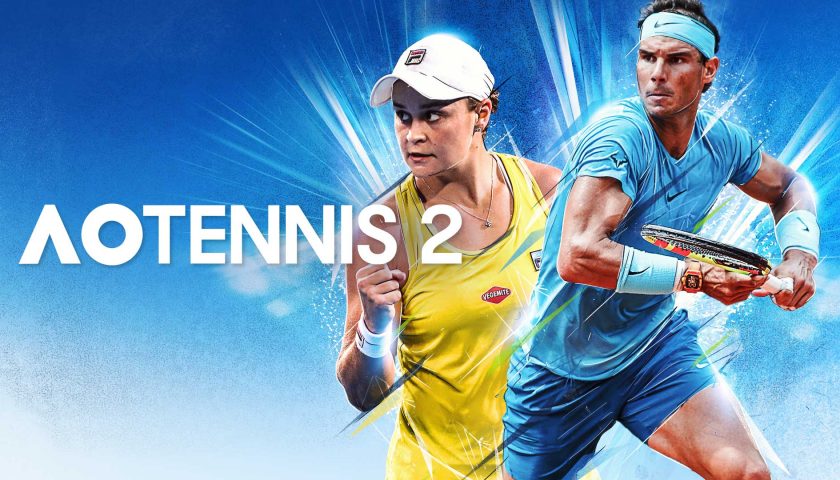 AO Tennis, when it was first released was a bit of a disaster. Clearly the victim of a small budget and tight time frame, it hit the scene undercooked and as a result failed to impress anyone. But, to Big Ant’s credit, they kept working at it, patch after patch, finally finishing up support of the title when it reached a solid and enjoyable state. So with the release of AO Tennis 2, the question has to be asked, did Big Ant learn from their last release or did they repeat the mistakes of the past? Thankfully, the answer is very much the former.

Booting up the game, I was greeted with a very familiar layout. I have quite the history with Big Ant’s sporting titles, especially the cricket games, so I felt immediately at home. Everything I expected to be there was. Create a player, single matches, multiplayer, create a stadium and a career mode. It is a standard set of features for a sports title, but they are all implemented well and there is nothing obvious missing. The biggest addition to AO Tennis 2 is the Career mode, which is quite the deep way to play, especially if you take the route of a young star. It juggles all the things you see in a good career mode, sponsorships, managing schedules, hiring coaches, and puts them in the world of tennis. There are even little story style cutscenes that add a nice bit of personality to proceedings. It is no NBA 2K storey mode but it is entertaining none-the-less.

This does bring me to something that is worth mentioning. This is primarily a “sim” experience. On anything other than the easiest difficulty the game punishes your mistakes and makes life quite tough for you, especially as a rookie with low stats. Make no mistake, this is the game’s intention. AO Tennis is not an arcade sports title, it aims to simulate tennis and the pro tour as much as possible and as a result, things aren’t easy. As a rookie you will lose more than you win for a long time, gradually improving your skills and abilities to the point where suddenly you are not getting belted anymore, you start winning matches and then finally are ready for a grand slam appearance. This approach to the career mode is likely to put off those looking for a quick and easy experience, but for Tennis fans seeking a deep recreation of their favourite sport it feels right on the money. There is the option to start the career as an already established professional like Ash Barty or Rafael Nadal if you want to avoid the slow slog to the top, but while that makes things a little more approachable, it doesn’t make it easy by any means.

The sim theme continues with the gameplay mechanics themselves. The entire game is built around timing your shots correctly. Getting that perfectly timed shot (as shown by the handy onscreen indicator) results in a ripping cross-court shot that will stretch your opponent to their limit, mistime it and it is just as likely to go out and you lose the point. The game does very well in giving you all the tools to know when you are getting things right and when you are getting things wrong, so there is never an instance when it feels unfair. This is a game about improving your own play, not about beating or exploiting the AI opponent. Early on I found myself aiming a fair way within the lines of the court, so as not to send the shot out when I mistimed it, but as I progressed, I found myself more and more confident in stretching the court and pushing shots to their limit. In a lot of ways, AO Tennis 2 resembles Big Ant’s early Don Bradman cricket titles, by focusing on realism as opposed to quick thrills they are creating a game that can be enjoyed for a long time by the group of people it is aimed at. The downside to this, of course, is that it will put some people off, but trying to keep everyone happy would likely end up upsetting everyone, so I feel it is wise to focus on one group of players, at least until the franchise is more established.

Graphically the game is much like other Big Ant games, fine. This isn’t going to win any awards in the looks department but at the same time, there isn’t too much overly wrong. I feel like the game running smoothly is more important than ultra-realism anyway, which is certainly the case here. The real-life players are immediately identifiable, the stadiums have a nice amount of detail and everything runs at a nice clip, so there isn’t too much to complain about. Sound is much the same, it does the job without excelling in any area. Once again, I feel that these are the sacrifices small developers need to make to ensure that the gameplay is the best it can be so I am ok with that.

There is no doubt that AO Tennis 2 is a vastly superior game than the first title. Big Ant has learned those hard lessons and came out ahead of the game because of it. Deep, simulation gameplay, a strong career mode, all the gameplay modes you would expect and Big Ant’s traditionally excellent suite of character/stadium creator tools means that at this time, this is the best Tennis experience money can buy. It will likely put off those looking for a game like Virtua Tennis, but for the hardcore tennis fans out there, it is an easy game to recommend. Don’t let the last title fool you, this one is an Ace.