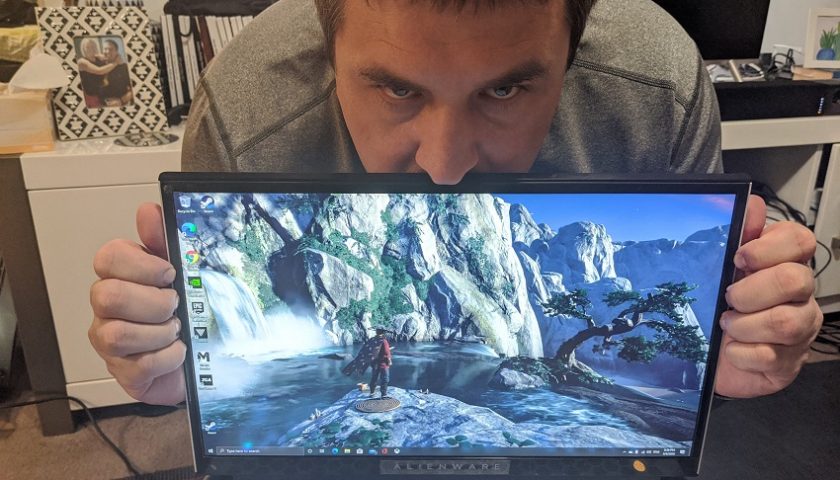 Player 2 Vs Alienware: The Laptop Rematch

Earlier in the year, I spent quite a bit of time playing around with the very cool Alienware Desktop range. There is no denying it was some great gear, that while being hard on your wallet, was wonderfully designed, engineered to perfection and able to handle anything a game could throw at it. But one thing was missing from that full set of goodies. What about portable power? What about the need to get my RTX powered gaming on the go? Well, that is where the Alienware M17 R3 Laptop comes in and let me tell you, for just about the first time ever I am questioning the need for a desktop computer.

This thing is all about power. The model I reviewed had a 2080 super video card under the hood and as a result, there wasn’t a game I could throw at it that would make it baulk. Control with all the RTX goodies on? No sweat. Shadow of Tomb Raider? Easy peasy. Metro Exodus? Without even blinking. This is a laptop that can play games better than most desktops can and it does it with style too. The only slight catch is it uses a 1080p monitor so you can’t reach 4K resolutions, but honestly, when using a laptop, 4K is serious overkill on a screen that small so there is no real point.

Perhaps the most impressive thing about the M17 though is the design. Some sort of black magic has been used to create a fairly light laptop that has no issues with heat whatsoever. The last Alienware laptop I reviewed was back in 2017 and it was an impressive machine but was both heavy and loud, so I was expecting the same here. Put it simply, I was wrong. this Laptop is lighter than my current work laptop and has no heat issues even when playing the most demanding games. The fans are noticeable after long play sessions but it is no louder than the average desktop PC and certainly quieter than a PS4 in full flight. When undertaking less stressful tasks, the M17 is whisper-quiet, so quiet in fact you will forget it is on.

Special mention has to go to the keyboard on this beast because quite frankly, it is the best laptop keyboard I have ever used. I am typing this review on the laptop and can’t help but marvel at just how nice it is to use. Normally laptop keyboards are functional but hardly appealing but in the case of the M17, It is certainly right up there with high-end gaming keyboards. It is the small things like this that separate the M17 from the pack, it is clear that the engineers are not just happy with good enough and want that extra level of polish that can be seen through the entire range of products.

There are some slight negatives though. All that power comes at a cost and that cost is battery life. Doing simple tasks like word processing I got about 3-4 hours out of a charge, which isn’t exceptional but isn’t terrible either. When I loaded up a game, however, that time went dropped to about an hour. This isn’t a laptop you can use during a long commute or car trip folks, as you will feel like you have barely gotten out of the driveway before it needs charging again. Also while the laptop itself is on the light side for something of this spec, its power brick is about the size and weight of a small Volkswagon, so that is also something to keep in mind if you are planning on bringing it to and from the office every day. To be fair though, all of this is to be expected with the sheer grunt the M17 packs and is a necessary sacrifice to enable the high-end gaming.

So who is this gaming behemoth for? Well for the first time ever a laptop has me questioning the need for a desktop PC. In fact, If my only desire was to play games, this would be the perfect alternative to a big desktop setup. The only reason I wouldn’t go this route is the video and web production stuff I do for Player 2 which is much easier with two big monitors and the million USB connected devices I need to do that sort of thing. But if it was just a desire for games, this Laptop is more than enough for all but the fussiest of 4K fanatics as it easily handles anything you can throw at it. It also hooks up to another monitor or even a big screen TV easily so getting to 4K isn’t out of the question either.

Being Alienware, this doesn’t come cheap. The model I reviewed retails for around $5000, so it is going to take a big chunk out of your savings. That said, the build quality is undeniable, the design is second to none and the raw power is the match for just about any PC on the market. This could easily replace a standard PC as your main gaming machine and while it doesn’t have the longest-lasting battery, it is fairly light so as long as you have a nearby powerpoint, it is perfectly portable too. All of this is backed by Dell’s excellent warranty and repairs service, which is better than just about every other laptop maker in Australia by quite a long way and you can see why the price is climbing. I will leave it to you to decide if it is worth the money but know if you do splash out you will be getting yourself one hell of a portable gaming station that will be more than enough for a long time to come.

Let me leave you with some screenshots taken directly from the laptop, just to show it off really.