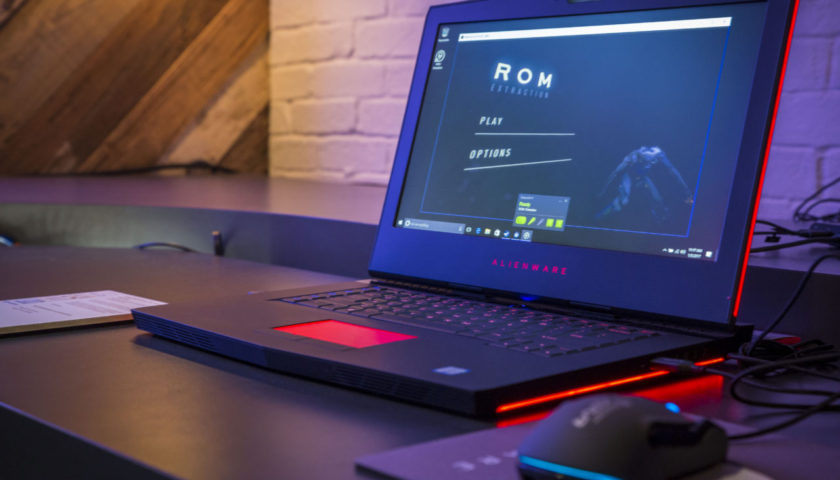 I must admit I have always been rather old-school in my thinking regarding gaming laptops. In my mind, I was convinced that a portable gaming system could never replace a fully decked out gaming tower. That isn’t to say that gaming laptops in the past haven’t been able to play games, just they haven’t been able to do it as well as my trusty desktop PC. That thinking however, received a massive shake up once I got my hands on the Alienware 15 gaming laptop. In fact, I can safely say that not only does it outperform my gaming rig, but I could conceivably see it replacing it all together.

Now I want to get the bad things out of the way first. This laptop is heavy, very heavy. This is not the system to take with you backpacking around Europe. I took it with me on a trip to Tasmania and I was worried it was going to be too heavy for the carry on luggage. Of course, the weight doesn’t really matter when it is sitting on a desk, but it is worth mentioning as it restricts the portability somewhat.

The second problem is noise. Generally, the Alienware 15 runs nice and quiet but I did find that once I started to push it the fans whirred up significantly. Now, this was only when I was really throwing some tough work at the system, games like Doom at 4K resolution, but it did get quite noisy. My wife asked me if it was raining at one point when in actual fact it was just the fans in the system.

Now both of these issues are to be expected and to be honest they didn’t affect my love for this system in the slightest. This is a beast of a laptop and my time using it was a pure pleasure. Sporting an i7 and GTX 1070 it was almost unstoppable when it came to its primary goal of playing games. I bombarded the system with a range of games known for pushing systems and it handled them with ease. Doom, no problems. Civ VI, piece of cake. Battlefield 1, didn’t break a sweat. Perhaps the most impressive feat in my mind however, was when I threw the notoriously dodgy port of Batman: Arkham Knight at it. I cranked the game to ultra settings and enabled all of the fancy smoke and cape effects that have been crushing video cards since the game was released and the Alienware 15 didn’t skip a beat. It maintained an average of 80fps and never once dropped below 60. Honestly, I didn’t know the game could look so good. (You can check out a video of my time on the laptop with Batman here.). I couldn’t find a game in my Steam library that could bring down this machine. I tried, I really did, but it just kept coming back for more.

Using the laptop was quite comfortable as well. The keyboard featured nice large buttons and a full number pad so it was easy to use for more mundane tasks such as work and writing this review. The touchpad is one of the best ones I have ever used, sitting comfortably lower than the keyboard its self, meaning accidental bumping occurs far less often. After some time using the system my hands cramped up a little, but with giant mitts like mine that is to be expected on anything other than a full keyboard and mouse. People with hands that come in normal human sizes shouldn’t have too many problems with using it for a long time. Speaking of Keyboard’s and mice there was one small problem with only 2 USB ports available on the system. So without a USB Hub handy, I was forced to do some device juggling at times. Not a massive issue but all the same it would have been nice to have a couple more built in.

Battery life is about what can be expected from a machine this powerful. Doing day-to-day tasks like word processing I managed to get about 3 hours out of a full charge, but as soon as I started a game up that dropped to about an hour. This is not a system to take out to the park on a sunny day, well not unless you are taking a diesel generator as well. As with all of the slight downsides of the Alienware 15 however, this problem is pretty much expected and I am sure that people buying this system are aware of the mobility sacrifices they need to make to get such an ass kicking gaming laptop.

Now we come to the big one, price. Power like this doesn’t come cheap. Alienware 15 models start at around $2400 dollars, but for the all singing, all dancing model I reviewed it is much closer to $3400. Without doubt that is a lot of money. But at the same time, it is pretty easy to spend that sort of money on a gaming desktop and this has the added advantage of portability. The system is also extremely well built, exuding a sense of craftsmanship that it very rarely seen in technological items these days. The laptop also comes with a hefty piece of mind in Dell support and warranty, one of the best support services getting around.

In all, there really isn’t going to be many better options for a gaming laptop. Sure it is pricey and if you use it on your lap you are likely to crush your femurs but the Alienware 15 delivers gaming performance like no other laptop I have ever used. I could truly see this as being a genuine desktop replacement for someone who likes to take their gaming on the go. If LAN parties or eSports comps are your thing then this system is ideal for you. Hell if you are someone that just wants to play games without the traditional hassle of a desktop PC then this will also meet your needs.

Now comes the sad part where I have to hand it back to Alienware…… I wonder if they will buy the “it got lost in the mail” shtick… It is certainly worth a try.