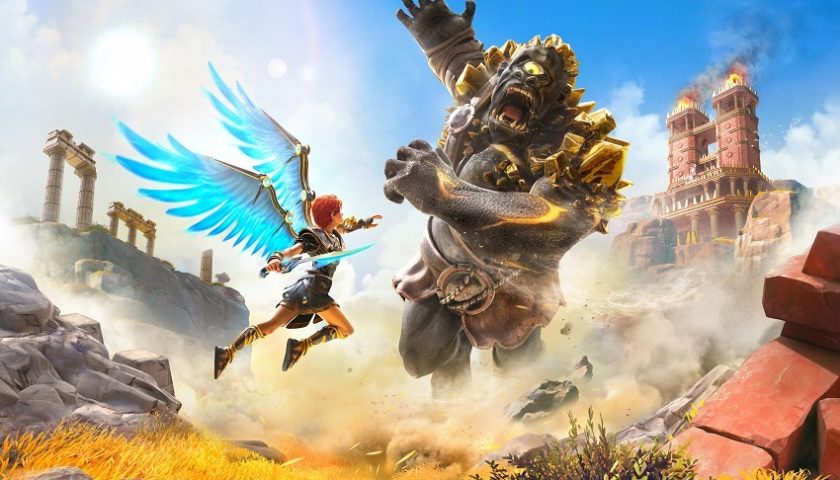 They say “imitation is the sincerest form of flattery”. Or is it “good artists borrow, great artists steal”? Whatever the case may be, Ubisoft Quebec’s Immortals: Fenyx Rising follows up their previous title Assassins Creed: Odyssey by embracing the mythological aspects of Greek history whilst also paying serious homage to Nintendo’s 2017 masterpiece The Legend of Zelda: Breath of the Wild, a game which itself subverted many conventions of open-world game design pioneered and refined by Ubisoft over the preceding decade. Immortals: Fenyx Rising is a clear response to Breath of the Wild, Ubisoft Quebec serving up a colourful and engaging experience that smoothes over some of the more divisive elements of its muse but loses some of its mystique in the process.

Immortals is a third-person, open-world action/adventure which thrusts players into the role of Fenyx, a plucky young soldier ship-wrecked on the Golden Isles as the titan Typhon wages war against the Gods, many of whom have been cast down and imprisoned. In desperation, Zeus and Prometheus charge Fenyx to defeat Typhon who, having overthrown the gods, is now unleashing havoc across the Golden Isles. A classic ‘hero’s journey’ ensues as Fenyx conquers foes and frees Gods whilst learning about the many past misdeeds and rivalries that led to such conflict. The story and its presentation is perhaps the biggest giveaway that the audience for Immortals skews somewhat younger that Ubisoft’s other flagship franchises, it’s cartoonish visuals and ‘cheeky schoolboy’ approach to humour glossing over some of the less savoury elements of the mythology which will most likely soar over the heads of younger players. Foregoing the ‘silent protagonist’ trope, Fenyx and the many supporting characters in Immortals bubble with personality despite some questionable accents on the part of the voice actors, the most egregious example being the ‘comic/straight man’ dual narrator act of Zeus and Prometheus who deliver groan-worthy jokes at an incredible pace. Despite the impending threat to existence, the tone throughout Immortals is incredibly light and bounces along like a Saturday morning cartoon series, aided by the lush art direction on display.

Immortals rotates through three main pillars of gameplay; traversal, combat and puzzle-solving. Traversal is undoubtedly the most vital of the three, aided by stamina-based climbing and gliding alongside the option to tame mounts or simply run everywhere. The Golden Isles is an expansive setting, a vibrant world that stretches out across the horizon and invites players to explore the many secrets it holds. A smorgasbord of biomes await players, tantalising glimpses in the distance beckoning would-be adventurers. Unlike the oft muted colour palette of Breath of the Wild, the saturation level is off the charts in Immortals, which makes the similarly Greek-inspired Assassins Creed Odyssey look positively lifeless by comparison. However, if you were expecting Immortals to deviate from the almost cliche ‘climb a tower, reveal icons on the map’ loop then I’m sorry to disappoint; even Breath of the Wild employed this particular conceit and it’s no surprise to see it return here. One aspect of this well-worn circuit I do enjoy in Immortals is the way in which items and locations can be selectively revealed. Once a player has ascended a God statue, which will unlock the relevant area in the map menu, players then manually scan visible items and events from their vantage point to populate the map with them.  For a certain subset of players, this choice preserves the ability to get lost in the world of the Golden Isles and stumble across such things organically, while also allowing goal-oriented players to scan everything they possibly can and get to work maximising their loot to playtime ratio. Although Fenyx running out of stamina remains a constant barrier to uninterrupted exploration sessions, falling down a cliff face is fairly infrequent as Ubisoft Quebec seem to have crafted mountainous areas to be slightly less naturalistic, routinely featuring small outcroppings or flat sections at the most convenient of times. Nor does tumbling down a mountainside or plummeting like a stone to the ground below result in instant death – aside from a fair dose of damage, penalties around movement are almost non-existent so whether climbing, gliding or diving, moving around the Golden Isles is a carefree experience. However, no hero’s journey would be complete without obstacles to overcome and for Fenyx, the Golden Isles is brimming with brutes and beasts in service of Typhon spoiling for a fight.

Combat is without a doubt the facet of Immortals which owes more to the previous work of the Ubisoft Quebec team than any outside inspiration. Mixing ranged and close-quarters weapons and skills, Fenyx can hack, slash and shoot their way out of almost any situation thanks to a combat system that just about every third-person action/adventure game of the past decade has used. In retrospect, combat is probably the one area of Breath of the Wild that received a fair share of criticism, so I can already hear the sighs of relief from some at my next statement; there is no weapon degradation or finite ammo in Immortals. None. Zip. Arrows recharge, edged weapons remain sharp and upgrades are permanent. Sounds like a dream come true, right? It may be, but it comes at a cost. Despite my own misgivings with the system, weapon degradation was absolutely the right choice for Breath of the Wild, lending the game an improvisational spark it would have otherwise lacked and keeping players on their toes. In foregoing this, Immortals ensures that both combat and weapon loadout for players is a known quantity at all times and as such combat can become rote compounded by enemies who trade in predictable routines and limited movesets. Standard enemies don’t put up much of a fight and the brevity of encounters ensures they remain engaging if not entirely fresh, but the extended health bars of bosses make some of these fights outstay their welcome.

Breaking up both exploration and combat are the puzzle-solving aspects of Immortals, which can be found in various forms across the overworld of the Golden Isles or by diving into the many Vaults of Tartarus which dot the landscape and are Immortals answer to BotW’s Shrines, short self-contained ‘puzzle dungeons’ which often involve manipulating the physics of the world to press switches and open doors. Pattern memorisation, sliding block puzzles and order of operations logic puzzles are all represented in both the Vaults and the overworld itself, varying in difficulty from the plainly obvious to the slightly taxing. In a game clearly targeting a younger audience, I’m not upset that Immortals isn’t quite scratching the same itch as The Witness and it’s fair to say that the process of solving even a simple puzzle is often where the joy is derived; love the journey, not the destination and all that. The varying kinds of puzzle in Immortals leads to an element which I understand the need for but have a personal distaste for all the same; an abundance of currencies. You’d be forgiven for mistaking Immortals for a microtransaction driven mobile game such is the breadth of inane currencies on offer – ambrosia, amber, skill coins, lightning bolts, a veritable rainbow of crystals – each of which serves to power up Fenyx in some capacity. It is these currencies upon which all of Immortals upgrade systems depend, pushing players towards tackling the full scope of the content on offer rather than rushing from story mission to story mission. A high focus on RPG characteristics via weapon upgrades, armour sets and unlockable skills reward players in tangible ways and Fenyx feels noticeably improved when revisiting earlier areas of the world map and the lower level enemies that populate them. Oh, and it wouldn’t really be a Ubisoft game without some sort of Helix Credits equivalent, simply titled Immortals Credits here which must be purchased with real-world currency to buy cosmetic upgrades. While some might baulk at this, the reality is that they are perhaps the most easy-to-ignore implementation of the system I’ve seen in a Ubisoft title to date.

In some ways, it’s fitting that Immortals is the first direct AAA response to Breath of the Wild, a title which received numerous ‘Game of the Year’ wins and has subsequently topped many ‘Game of the Generation’ lists. Where some would accuse it of being derivative and uninspired, I find its release reminiscent of the fabled rivalry between The Beach Boys and The Beatles during the 1960’s as they sought to outdo one another across a series of albums. This process not only saw each band reach new heights creatively but also push the industry forward as a whole. Breath of the Wild wasn’t created in a vacuum and to suggest that Nintendo’s developers weren’t drawing inspiration from the West and the work done by Ubisoft requires some serious mental gymnastics. While I don’t quite think Immortals: Fenyx Rising is Ubisoft Quebec’s Pet Sounds moment, it is a step toward greatness that eschews much of the baggage their longer-running series’ are saddled with. While aimed at a younger target audience, Immortals is no less rewarding for it and is quite easily the most enjoyable open-world game I’ve played in 2020.