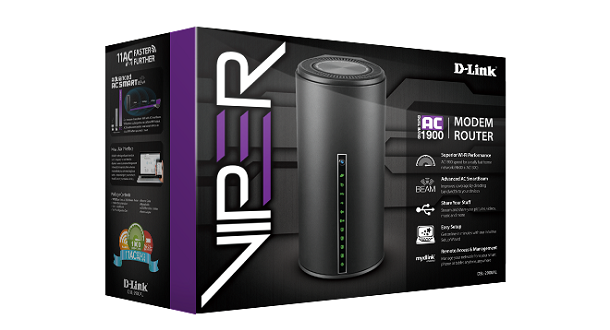 Technology that improves gamer’s experience is important to us here at Player2. So important in fact that we are risking our home PCs, consoles and sanity to bring you reviews of some great gadgets and save you the heartache and guesswork that goes with buying new gear. Welcome to the Player2 Tech Corner.

As we all know the internet is a series of tubes, so what better way to serve your home network than a router in the shape of a tube. Thats right the D-Link VIPER, or DSL-2900AL if you want to get technical is a ADSL2+ modem & wireless router combo that is running the latest 802.11AC wifi specification.

Now if networking techno-jargon isn’t your cup of tea, let me break it down for you, 802.11AC wireless spec means that in the perfect conditions, your wireless is capable of hitting speeds faster than a WIRED connection. Of course in your home there are all sorts of things that will play havoc with hitting that ‘best possible speed’, things like walls, bathrooms, the neighbor’s wifi, those sorts of things will each take a chunk off your ability to hit those peak speeds.

So the fact that the Viper has the ability to pump out wifi at ludicrous 1,900 Mbps means that even with all of the inevitable interference that occurs in the home environment you still have a very good chance of hitting speeds faster than those of a wired connection – and all without needing to run blue networking cables all over your house!

But will it make your internet go any faster?! Well no, it won’t, but we live in australia, so nothing will – however it means that streaming content from your media servers (plex and the such) around your network will be done at such lightning fast speeds and that buffering will be a thing of the past. Also it’s important to note that if you are running Windows 10 and have a Xbox One, you can make use of this super wifi to pretty much get latency free game streaming to your PC.

You will of course need to have the Xbox One plugged into the VIPER, as none of the supposed ‘next gen’ consoles are running anything near 802.11AC. So what I have set up for my network is all the consoles plugged into the VIPER via a wired gigabit connection and then using the super wifi to connect to my PC upstairs. It is a shame that most of the devices currently on the market do not yet support this super wifi, but I think it’s a fair assumption to say that the next round of phones / tablets / Smart TV’s & game consoles SHOULD be rocking this super wifi technology.

With a high end Modem/Router combo such as this, all of the features you would expect are available to you to tinker with –  things like Port Forwarding; Quality of Service (QoS); Parental controls etc; and they are all wrapped up neatly in the new D-Link ‘MyDlink’ web page which can be accessed by any device on the network (with the username and password of course).

It is important to note that while the MyDlink web app is great for those of you that find networking a dirty word, if however you are used to running a custom firmware then you may find the MyDlink app limiting in what you can do. Personally I found the VIPER amazingly easy to setup and connect to. Port Forwarding for the consoles that needed it was easy to set up and I even was able to prioritize the Netflix TV above all other network traffic with ease.

Another feature of the VIPER is a piece of tech that D-Link like to refer to as ‘Advanced AC Smart Beam’ which is supposed to detect the direction that your devices are accessing the VIPER and prioritizing ‘wifi beams’ in that direction. I have no real way of testing this as the VIPER pretty much coats my entire two story house in delicious super fast wifi. So I guess its working?!

If however you find yourself not having enough network range, you will not have the option to replace the existing antennae with some larger high gain ones, because the VIPER has all its antennae hidden within the tube like device. As I mentioned before, I have a pretty large two story house and I had no issues with any sort of dead spots or reduced signal, but if your situation currently requires a router with third party high gain antennae, then I guess the VIPER isn’t for you.

The VIPER also comes equipped with a USB3.0 port and the ability to run as a DNLA media server when you have a hard drive connected. Again, setting this up is as simple as plugging in the drive, enabling the DNLA media server and hey presto its media time!

In terms of cost, the VIPER is going to set you back about 275 clams, which may seem a bit steep until you realise it’s pretty much future proofed your network for the next 5-10 years minimum. For those of you lucky buggers with FTTP NBN the VIPER has the ability to run just as a router, showering your house in delicious NBN internet, but if you’re scheduled for the FTTN rollout, you will need to get a VDSL modem as the technology is different from ADSL.

Like most of you I like my networking to work straight out of the box, or frankly it can go straight into the bin – thankfully the VIPER did exactly that. Not 5 mins after I had opened the box my internet was connected, the network was all set up and super wifi was beaming all over the house. If you are after a new ADSL2+ modem / router combo I can’t recommend the VIPER enough.