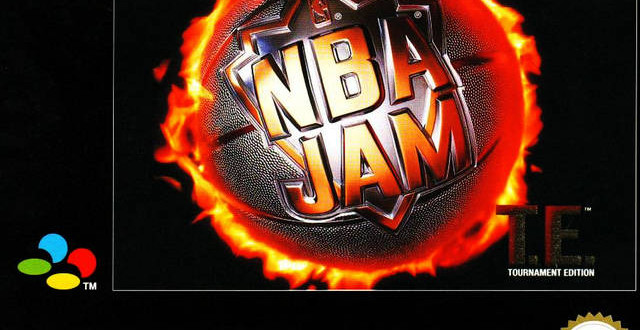 Those Were the Days – NBA Jam

I never owned a SNES or Mega Drive growing up. I was always a PC kid and never had one of the magical Mario or Sonic driven machines that all of my friends had. This led to much jealousy of my console playing brethren and despite excessive nagging, cajoling and even attempts at blackmail/bribery my parents wouldn’t purchase a system for me. One birthday however they did let me hire one to play with my friends who were sleeping over. We hired a SNES with four controllers (using the multi-tap thingy) and a couple of games. One of these games was NBA Jam and I can honestly say that since that night multiplayer gaming has never been the same for me.

I had played NBA Jam previous to this evening at arcades but that was usually against the computer and while it was fun, it never pulled me in. With four players however NBA Jam became a whole different beast. The relatively simple gameplay meant that everyone could pick up and play this over the top sports title (even my parents had a go) and enjoy an even contest. We played for hours and hours, barely stopping for a slice of pizza and a soft drink. Impromptu tournaments were setup, games were won and lost, tears were shed and punches were thrown. This game was unlike anything I had ever experienced and it brought out both the best and worst in all of us. Boys in their early teens are not exactly know for their tact or subtlety so smack talk, gloating and anger were all a result of this evening of basketball related fun.

One of my friends brought over a gaming magazine that had a list of secret characters we could play as. Bill Clinton, Will Smith (or The Fresh Prince as he was known then) Charlie Chaplin and even Scorpion from Mortal Kombat were all playable. Of course no game was allowed to start if someone didn’t hold the turbo, pass and up buttons on controller one to enable big head mode. This was a game the embraced stupidity and captured hearts because of it.

I think it was about 2am when my parents finally pulled the plug (literally) on the gaming session and sent us to bed but sure enough we were up early playing once again. Looking back on it now I can really see that 8 highly competitive young boys with very little sleep playing video games against each other was probably not my parent’s idea of a calm birthday but I am sure glad they put up with us for that evening. Very few gaming experiences are so firmly etched in my mind as that one evening of NBA Jam and a group of my best friends.

This is why NBA Jam will always be one of my favourite games Not because it is the best game I have ever played, not because of amazing graphics and not because it featured unique gameplay. It will forever be entrenched in my greatest games list because of one night, a SNES, four controllers, a 32cm TV and eight friends. There was something truly magical about that combination that has stuck with me ever since.

I would love to hear from any of our readers about a similar evening, where one game has changed things for you. Let us know in the comments!