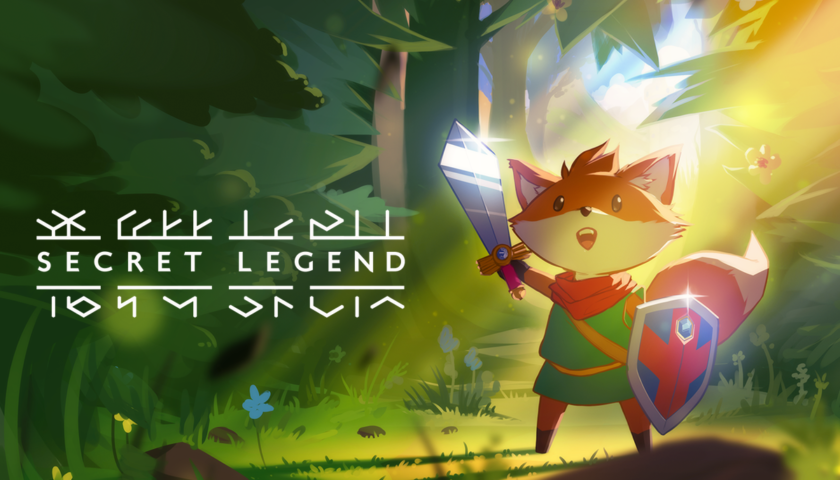 Secret Legend is upcoming game that marries the adventure of Zelda with more whimsy than you can poke a stick at. The title looks rather impressive considering it is being primarily created by just one man. That one man, a Mr Andrew Shouldice, kindly gave Paul James an interview to give Player 2 readers further insight into the development and goals of Secret Legend. Enjoy

Paul: Thanks for your time today Andrew, and before we go any further I must say that Secret Legend is looking great so far. Can you tell our readers a little bit about the game? What is it?

Andrew: Hi there, and thank you! Here’s the super quick pitch: Secret Legend is an isometric action adventure about a tiny fox in a big world. Explore the wilderness, fight monsters, and find secrets!

P: When I look at some of the available footage, I immediately think of The Legend of Zelda. Has that iconic franchise been an inspiration, or served as a template (of sorts)? Are there any other games that may have served as a point of reference for Secret Legend?

A: Zelda is definitely an inspiration, especially the earlier games. A lone adventurer, making their way over the countryside and through mysterious forests, sword and shield in hand… There’s something very special about being left to your own devices in a big, hostile world, ripe for exploration. I like those sorts of games.

P: Are there any external points of reference (other media forms, your own experiences) that have driven the design of the game, whether they be thematic, stylistic or perhaps even in the narrative?

A: Exploring the woods near my grandmother’s house and trying to make maps, poring over NES instruction manuals for games I’d never play, that sort of thing. There’s a little bit of inspiration from Monument Valley and Ghibli films in there too.

P: One of the things that immediately catches my eye when I look at the game is the incredible lighting? How have you managed that?

P: There appears to be a language that has been developed exclusively for Secret Legend. Can players expect to slowly decipher the characters that make up the language? Or will that be a constant mystery?

A: I’ve been trying to figure it out too. Mysterious!

P: How does character development work in the game? Is there a levelling system of sorts or is progression linked more to the equipment at your disposal?

A: There are lots of cool things to find in the world, and part of the fun is figuring out how they’ll help you on your way. I don’t want to say too much, but exploration is important in this game.

P: So shifting gears somewhat onto you. How long have you been into games development? What past experiences do you have that you’ve been able to bring to the development of Secret Legend?

A: I’ve been messing around making games for a long time, playing with QBASIC as a kid. As far as the industry goes, I worked for about 6 years at a casual game’s company before going indie. I’ve also done a fair number of game jams over the years, like Ludum Dare, Global  Game Jam, and Train Jam. Those experiences were really important in giving me the confidence to try and build something bigger.

P: You’ve been working within an accelerator program called Stugan. How exactly does this work on a grander scale, but also how does it impact your day to day development?

A: Stugan was great. It’s a program where you spend two months in a cabin in the Swedish countryside working on your game, alongside other developers doing the same. I was there for July and August of this year working on Secret Legend, meeting amazing people, and getting ready for PAX. It was a great way to prepare for PAX, actually — there were so many talented designers there that I always had a good supply of playtesters.

Now that’s Stugan’s done for the year, I’m back in Halifax here in Canada.

P: You recently took Secret Legend to PAX West, how was the reception? Was it daunting taking the game to such a massive event and putting it in front of so many people, both press and fans alike?

A: The game’s reception at PAX was really heartwarming. The booth was constantly busy — we had to start handing out booked appointments, and the schedule filled up before noon on most days. It was the first PAX I had been to, let alone shown a game at. I was expecting to be destroyed, honestly. All the advice I had been receiving made it seem like it was going to be a nightmare, but it was actually pretty great. Everyone was really friendly and helpful, the Indie MEGABOOTH people are fantastic, and I didn’t even get sick!

P: Rarely is the development of a video game a simple walk in the park. What have been some of the challenges that you’ve encountered through development thus far?

A: One big challenge is just having to be thinking about a lot of things at once. Using programming and art to implement a solution is one thing, but figuring out which problems to solve and in what order is a big design challenge. The business side of making games is also a huge job by itself. Knowing where to put effort on any particular day takes careful thought and discipline. It’s really easy to distract yourself by fine tuning art when there are design issues that need solving, for instance. It’s one of those problems where knowing is half the battle, so I feel like I’m developing better skills on that front.

P: Here’s hoping that everything is smooth sailing from here on! I’m sure that those reading this have liked what they’ve seen so far and are keen to know more about the game. What platforms are you targeting to release Secret Legend on?

A: Windows and Mac, and hopefully consoles.

P: What’s next for Secret Legend? Returning to development, or will you be heading off to other conventions to get the game in front of more faces?

A: The game’s going to be shown at Double Fine’s Day of the Devs this year in San Francisco on November 5th. Admission is free! http://www.dayofthedevs.com/ I won’t be there in person, but there will be dozens of cool games to play there, including Secret Legend.

Other than that, it’s pretty much heads down development for the next while. 🙂

P: I know this is never a fun question, and I apologise for that but I must ask, when can we potentially expect to be getting our sweaty palms on a full release version of Secret Legend?

A: It’s got about another year to go, I think.

P: Thanks again for your time Andrew, I personally am really quite excited to see how the game pans out, as I’m sure a few more people now that they’ve read this. I wish you well in the continued development of the game, and cannot wait to see more of Secret Legend in the future.

For those of you who are interested in more of Secret Legend be sure to visit www.secretlegendgame.com and add your name to the mailing list so you can keep up with all the breaking and news/details from a game that is hopefully by now well and truly on your radar. You can also follow more of the day to day work via twitter at @dicey.