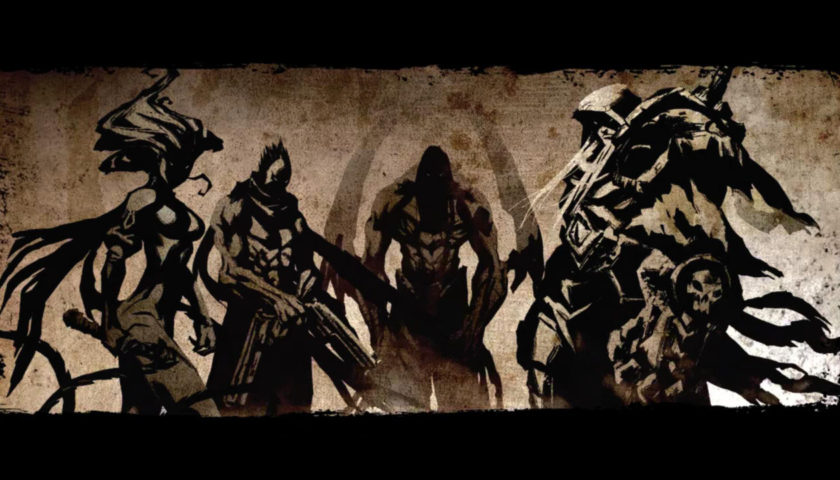 The Four Horsemen of the Diversity Apocalypse

Late last week it was announced the long awaited Darksiders 3 was a reality and it would be getting a release in 2018. This caused much rejoicing. After all the Darksiders series has a very cool concept and some great gameplay to back it up. But that rejoicing was tempered somewhat by a small but sadly vocal group on the internet. This group is up in arms and telling anyone with a twitter account how they feel about the game. Their issue? That the lead character of the game is Fury and more specifically, Fury is a she.

Now there are a few things I would like to say about this. Firstly I am no Darksiders lore expert but I am pretty sure Fury was always identified as a woman. Surely people that care about a franchise as much as they appear too would know that. It shouldn’t be a shock to them. After all these people are the ones that are complaining the developers are ruining their favourite series by making the lead a woman. Wouldn’t staying true to the universe created by the franchise be more important than the gender of one of the characters?

Even if I am wrong and the developers did change Fury into a woman simply for diversity’s sake I fail to see the issue. In the lore who is to say what gender these mythical demi-gods actually are? I mean they may choose their appearance to suit themselves. It doesn’t affect the game, or the story one iota. While having a female lead character may not affect the quality of the game, it does do wonderful things for the people playing the game. It provides representation, it provides diversity and it provides equality, three things sadly lacking in many areas of the gaming world

Now I usually avoid writing about things like this, there are many smarter folk that can articulate these ideas in a much better way. I am not qualified to write about diversity, I have no university studies to back me and I often shy away from topics such as this for fear of losing my temper. But in this instance, I have finally had enough and I have to have my say.  For those that don’t know, I am a straight white male. I have two kids, a nice 3 bedroom house, a wonderful wife and an annoying yet well-loved labrador. I am basically the most represented person on the planet. Hell, my family picture could be used for One Nation advertising campaigns. As far as fictional characters that I can identify with go, I have a whole pantheon to choose from.

But here is the thing. Millions of people out there don’t. In fact, if you fail to tick straight-white-male box your representation in video games drops significantly. This is nothing short of a tragedy in my eyes. If your culture, lifestyle, race or gender isn’t represented, it gives the impression that it isn’t as valuable or as important as what is portrayed in the gaming world and that is just out and out incorrect. This means that a whole host of people that I really care about are being treated as “less-than” me by the gaming industry and that in my mind is abhorrent.

Another thing that I really detest about this call for all games to feature nothing but big beefy dudebros with guns is something more selfish. Sure I love my blokey games. Halo, Gears, Doom, the list goes on. I really enjoy them. But do you know what else I enjoy? Playing as FemShep in the Mass Effect series, exploring teen love (and time travel) in Life is Strange and protecting the point as Mei in Overwatch. Do you know why? Because it is different. Plain and simple. Video games are works of fantasy so why not appeal to as many fantasies as possible. I know what life is like as a white guy and thanks to white guy saturation I know what it is like to play video games as a rough and ready white male adventurer. I want to experience more in these virtual worlds. I want to play as an Aboriginal hunter, a native American medicine woman or a gay African detective. I want to try new things, experience fresh perspectives and face unfamiliar challenges. Isn’t that what video games are about? The ability to experience something you can’t in real life?

So the way I see things here is there is a one-two punch of representation and diversity at stake. In the case of Darksiders III, THQ Nordic have decided to address that somewhat by creating a female lead. That means that gamers everywhere can look to a (presumably) strong female warrior character and enjoy the struggles of the apocalypse through her eyes. The choice of gender doesn’t affect gameplay but it does add the variety and visibility that the industry as a whole is lacking.

So for those of you out there complaining about Fury being a woman, or woman’s soccer appearing in FIFA or a gay male character in Dragon Age listen closely. You are the problem with gaming. Not diversity, not women and not social justice warriors. You. You are holding the industry back with your neanderthal level views and I have had enough. You make a mockery of people I care about and you belittle the hobby I love so much. The world is moving on, slower than we would like, but it is moving forward. This means that one day, in the future you will be left behind with nothing but your misogynistic, racist views to keep you company. Diversity isn’t holding gaming back you are and for the good of gaming, I hope your backwards, damaging and disgusting views just disappear.