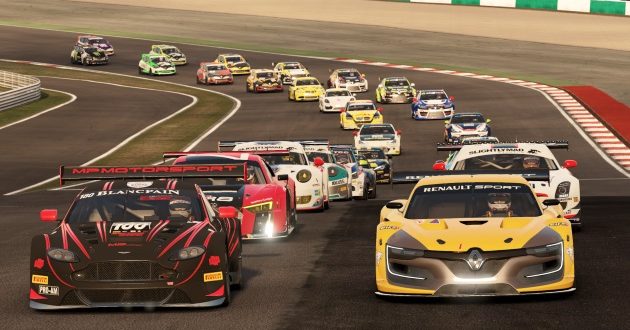 Project Cars showed lots of promise when it was released in 2015, but issues plagued its launch. Irritating bugs, a slim car roster with some notable absences, a tyre model that didn’t like being pushed beyond the limit and issues with gamepad controls meant that, despite selling over 2 million copies, Slightly Mad Studios acknowledged they had some work to do.

Two years later, that work is nearing completion with the impending release of Project Cars 2, and if my day with some of the SMS team over at the Bandai Namco offices in Sydney is anything to go by, race fans–both casual and hardcore–are in for a wonderful treat.

Jumping into their full kitted out racing rig, complete with a Logitech wheel and pedals as well as triple screens and a D-Box motion platform, I could immediately feel the difference in the tyre model. Driving the Zakspeed Ford Capri–an insane touring car from the 80’s with a huge turbo stuffed into the engine–around the Indy layout at Sonoma Raceway was more than enough to pick up on the difference.

Driving out of the pits for the first time with cold tyres and brakes, I gingerly made my way up to the first corner, rounding the bend and slowly easing on the loud pedal. The engine took a moment to respond due to the turbo lag, so I pushed it a little more and as the turbo finally kicked in, that was enough to make the rear tyres scream, sending me into an uncontrollable spin. I smiled.

I recovered and continued, having to clean off the dirt that gathered on my tyres, slowly coming up to speed as I got a few laps under my belt. It took 3 or 4 laps for the tyres to come in, but I could easily notice the difference in grip from lap to lap. That’s when I started to push, and it was here that I ticked off my biggest bugbear with Project Cars – the tyre model.

Whilst it’s not the optimal way to drive a race car fast, going over the limit of grip was no longer guaranteed to put you into the fence with the car progressively losing grip the harder I pushed. Slides and drifts could be caught and controlled, even held through the corner if you’re talented enough.

In turn, this has made a huge difference to how the cars felt using the gamepad also. Driving without driving aids turned on, which are again highly tunable for those who prefer a casual flick of the wheel from time to time, the car felt much simpler and intuitive to control. The uncontrollably twitchy feel was gone, instead responding in a controlled, smooth manner.

After trying some of the multi-class racing, which is filled with customisable options of its own like number of classes, points scored by each class and so on, I was given a shot in my go-to sim-racing car, the DW-12 Indycar, around one of the most challenging street circuits in the world, Long Beach. According to Slightly Mad Studios Chief Commercial Officer Rod Chong, it took the team six months of work to complete, recreating the track surface using laser scanning and photogrammetry technology. In fact, every new circuit in the game, including some of the older ones like the Nurburgring Nordschleife, have been updated using these techniques to make them centimetre accurate.

Each bump and dip in the circuit’s racing surface was perfectly replicated, making my ride in the D-Box a very bumpy, but incredible, experience. In an impromptu time trial challenge against Nicolas Hamilton–brother of three-time Formula 1 world champion Lewis Hamilton, professional race driver in his own right and handling consultant on Project Cars 2–we each drove 6 hot laps of the circuit to see who could nail the fastest time.

In my 6 laps, I laid down a best time of 1:08.4, which was good, or so I was told. Then Hamilton jumped in the rig and put down his best. His best was just shy of mine by 2 tenths, a 1.08.6. Nice. I should take no pleasure in beating someone who was as jetlagged as Nick was, but I’ll take it.

Other improvements to both graphics and the audio came to bear during a run in the wet, where I could see puddles forming in different parts of the circuit as the rain continued to fall lap after lap, which can cause the car to aquaplane and lose control if you hit them. Then as the weather cleared up, a drying line started to form around the circuit depending on which line the cars were taking through each corner, which I could both see and hear as I searched for the wet parts of the track on the straights to cool down my tyres – a technique used in real life racing as well.

It’s a packed year for racing games in 2017 with the likes of Forza Motorsport 7, Gran Turismo Sport and even F1 2017 coming soon. But with an all new and heavily expanded car and circuit roster, new tyre model, and a raft of other promising improvements, Project Cars 2 is set to put up a solid fight against the rest of the pack.

Project Cars 2 will release on PC, Xbox One and PlayStation 4 on 22nd September 2017.