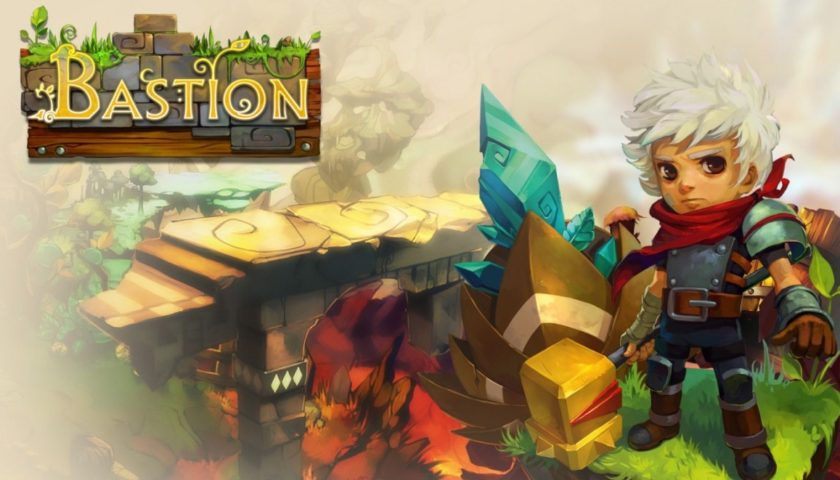 In Case You Missed It – Bastion

Indie games are often experimental in nature. Small overheads and low distribution costs allow these indie developers to explore possibilities that are not even considered when developing AAA games. Basically, indie developers can take risks, and as with all risks sometimes they pay off and sometimes they don’t.  This leads us to Bastion, an Indie game developed by Supergiant Games, and if their goal was to reinvent the way a story is told, they have succeeded admirably.

Bastion opens with a small boy (simply referred to as “The Kid”) waking in a room. As he leaves his room the narrator begins to speak about your journey. The Narrator is one of Bastion’s unique innovations, he quite accurately comments on what is happening on the screen at any time. Make the Kid smash a few crates and the Narrator will comment that “the Kid’s rage got the better of him” or “the Kid needed to let off some steam” This running commentary is wonderful in its implementation and adds to the fairy tale vibe that the developers were clearly aiming for.

The story is a simple one, The Kid wakes to find his world destroyed (the game calls this the Calamity) and must make it to a safe haven called The Bastion. Once there the Bastion has the power to restore his world as long as the Kid can find enough power shards to kick it into action. What sets this story apart, however, is not only the unique perspective given by the Narrator but how it very closely links in with the game. Every action seems to have a purpose in progressing the story and it is this very real feeling of consequence that involves the player in the story better than almost any other game.

The look of Bastion is also worth mentioning. A sharp hand-drawn style with a large helping of personality means the characters would not look out of place in a Disney cartoon. The levels themselves are also vibrant and intoxicating. One of the great stylistic choices the Developer has made is as you progress through the level more of the scenery appears, giving the effect of the level being built as you make your way through it. Bastion is full of these touches that really give it a strong personality, making it stand out from the crowd.

In fact, the only downside to Bastion is that the gameplay can get a little repetitive. At its core, it is a very simple Action RPG with ranged and melee attacks, some basic defensive moves and not much else. Each level is essentially the same, make your way from one end to the other killing everything that moves along the way. Playing Bastion in big chunks highlights this simple gameplay loop so as a result Bastion is best played in small doses.

At its normal difficulty Bastion is quite an easy game to finish, taking only about 4 hours to complete. To add a little extra time to the experience the game gives you the option to increase the challenge by invoking curses from the Gods, giving the enemies bonuses like regenerating health or extra shielding. As a prize for challenging yourself, you receive a bonus percentage of the game’s currency to spend on weapon upgrades and bonus potions which offer permanent stat boost for as long it is equipped.

Bastion upon its release really was something of a revelation. Charming, inventive and stunning to look at, this small little indie title really broke new ground on its release and it deserves to be experienced by just about everyone. It is currently available on Xbox One, PS4 and PC (as well as 360 if you have one laying around) and is usually available for a cheap price, especially on Steam. So what are you waiting for? The Kid is on a mission to save the universe and needs your help, are you up for the memorable adventure that awaits you?