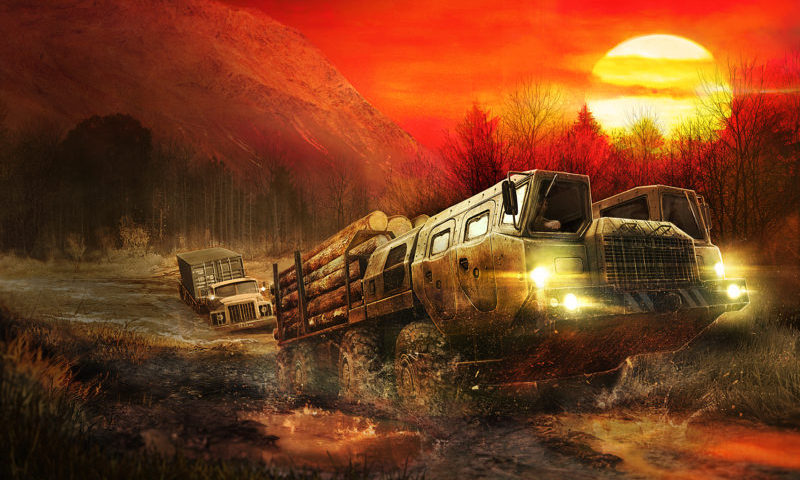 When I was asked to review Spintires: MudRunner, I thought ‘sure, why not?’. I like driving games, so let’s give it a bash! After sinking some hours into this title, I am well aware that this game is not like any other driving game on the market, or like any other game, period. What it is however, is frustrating in parts but mostly just a whole lot of awesome.

The aim of the game is simple (or so I thought): you’re a delivery driver, delivering logs to various lumber yards around the place. Easy, right? HA.

I thought ‘how hard can it be? All I have to do is take some logs from one place to another’. Oh, how wrong I was. MudRunner is less about fanging it around in the dirt with some logs on your trailer, and more about off-road vehicle simulation, something I did not realise at first. I kept expecting to be able to floor it down the road and through the puddles with no issues, so needless to say, I got bogged a whole freaking lot.

The game is split up into various game modes to suit a variety of play styles. After I muddled my way through the tutorial I decided to give some challenges a go. Challenges are short, goal-oriented activities that the game recommends you complete to learn about a range of techniques and aspects that aren’t covered in the tutorial. It’s a great way to digest bite-size pieces of information if you’re not familiar with the genre or title at all, so off I went.

Challenge 1 seemed easy: drive truck to trailer, load it onto your vehicle and then unload it at a destination elsewhere. Challenges also have bonus objectives you can choose to complete as you go, and one of mine was ‘don’t drive on the wrong side of the road’. I cocked that up immediately, which was excellent work on my part (though in my defence, in Australia we drive on the left).

Once I got onto the right side of the road, I promptly missed my turn off. Good going Jenn. I backed up, turned down the right road and, forgetting everything I had learned in the tutorial, immediately got stuck in a mud puddle. Unfortunately, because I spent so long spinning my tires trying to get out of the damn thing, the ground below me had turned to mush, and not even pulling myself out with a winch could help me.

This can happen to you a lot during the game. If you make too many errors trying to reverse or turn (and you will, I guarantee it) the ground below your wheels becomes useless. If you can pull yourself to better ground with the winch you can save yourself, but failing that you must suck it up and restart.

The sim games I normally play involve a lot more setting people on fire and a lot less trying to winch my way out of a giant mud puddle, but though it was frustrating at times, I found myself having fun once I had a better grasp on things.

That being said, I did have one major gripe with MudRunner; the camera. The camera deserves its own paragraph because it’s just so bad. At times, it seems like it is your friend and wants to help you get from A to B. At other times, it feels like the camera is your enemy, kicking you in the dick at every single opportunity. I understand it must be difficult to try and angle it to fit a giant semi-trailer in the screen whilst still showing the gamer all the important information, but a lot of the time I felt like I had to sacrifice one viewpoint for another. In the end, I wound up using the cockpit camera a lot, because at least that way I could see where the heck I was going.

Though the Challenge mode is new and awesome, single player mode is where the meat of the game lies. Two levels are unlocked in the beginning with more becoming available as you progress, and it’s here that this game really shines. The developers have put a lot of effort into making this title as realistic as possible; you can control the stick shift yourself or leave it on auto. You have to keep an eye on your fuel consumption, the quality of the road, the quality of your vehicle. The way the mud squelches under your tyres and the physics of trying to reverse a semi-trailer (HOW DOES ANYBODY DO THAT, IT IS FLIPPING IMPOSSIBLE) were two of my favourite things, even though the latter drove me freaking insane.

MudRunner: Spintires taught me something about myself: I cannot drive a truck. I have neither the physical strength, patience nor mental fortitude for this kind of shit, but now I have a whole new respect for people that do. Although at times this game made me swear blue murder in frustration, I can’t help but be amazed at just how good it is. It has the graphical brilliance of a triple A title, but the love and meaty gameplay of an indie. It really combines the best of both worlds, and I couldn’t recommend it highly enough to anybody who thinks there’s even a chance they might enjoy it.