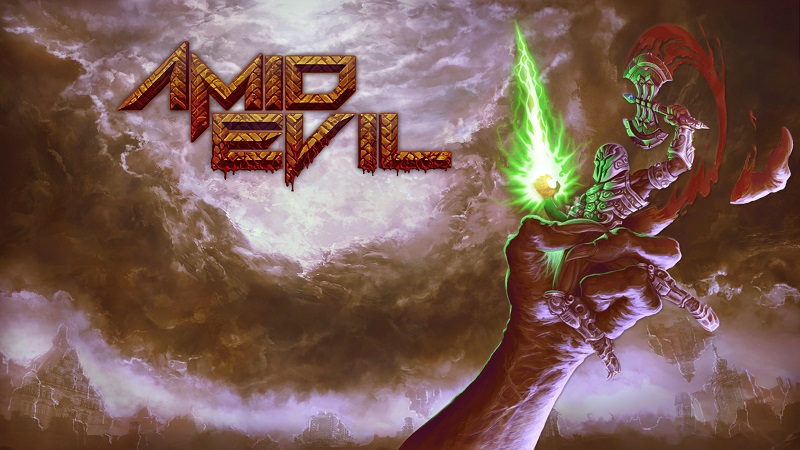 Back in the day when Raven Software was more than a multiplayer map factory for Call of Duty they used to actually make original video games. Good ones too! The first of those games to hit big was a title called Heretic, a swords and sorcery take on Doom (it even used the ID engine). The game was great and it was succeeded by three excellent followups in Hexen, Hexen II and Heretic II. All of these game took the frantic combat of Doom and mixed them with setting appropriate puzzles and a host of unique and entertaining weaponry. Alas, the Heretic franchise seems to be long dead but all is not lost. Amid Evil has just entered the fray and hopes fill the void that was left by its magic wielding older cousin.

Amid Evil makes no attempts to hide its inspiration. The developers even make cheeky references to Heretic in the marketing material. But do you know what? That is totally fine because Amid Evil knows exactly what it wants to be and achieves that goal easily. When I first booted up the game it felt like I was back in high school, in awe at the new wave of 3D games that were hitting at the time. The game looks a lot like it was made with the same tech that made Quake 2, but in reality, it probably looks much better than that. Memory and nostalgia are a funny thing right? Regardless of the old-school appearance, there is a lot of great artwork and style on display and old folks like me will get a huge kick out of how much detail the developers have crammed into a few polygons.

But nailing the old look is one thing, getting the gameplay right is another. Thankfully the developers have nailed it. Amid Evil is a wonderful flashback to a simpler time and it does nostalgia shooter better than just about any recent attempt. The developers have really hit upon the feeling that these sort of games used to evoke. The fast combat, the key hunting puzzles, the dodgy FPS platforming, it is all there and it all evokes memories of the past.

The enemy and weapon design is spot on for the setting too. On the weapon side of things, there are magic wands, swords that fire projectiles, Orb projectors (aka fantasy grenade launchers) and a rather satisfying mace that shoots out nail like projectiles that pin enemies to the wall. There is even a fantasy version of everyone’s favourite, the BFG, that wipes the entire screen of enemies in a purple blaze of light. As for the enemies, the game is broken up into episodes, much like the shareware titles of old, and each episode has its own theme regarding the baddies. There are Knights, floating eyeballs, weird ghosts and floating insects just to name a few. There is a huge variety in the enemies on display and each requires the player to adapt to their patterns. The AI that accompanies the enemies isn’t complicated, but it is certainly enough to overwhelm players if they aren’t careful. Of particular note are the boss battles, I won’t spoil them but they are some truly entertaining encounters that eclipse any of the boss battles I remember from Heretic or Hexen.

Amid Evil is in Early Access right now and as a result, there are some small niggles and glitches to be found, but to be honest I have seen full releases from Triple-A studios with more problems. I have no doubt that the Early Access phase will clean these issues up and as more and more content gets added Amid Evil is only going to improve. I feel confident in saying that it is a safe buy in its current form, with a great outlook for the future.

The real thing to consider when purchasing Amid Evil will be your desire to revisit the shooters of old. If you ever loved Heretic, Hexen or even Quake you will be well served by Amid Evil. It nails the feeling of those classic titles and pays homage to them without being an out-and-out copy. If, however you were raised on Call of Duty or Halo there may not be enough here for you and the old-school approach may put you off. Just know that Amid Evil is a continuation of Heretic in everything but name and it proudly carries that badge and that level of quality in everything it does.

You can check out Amid Evil in action in a recent episode of Player 2 Plays.