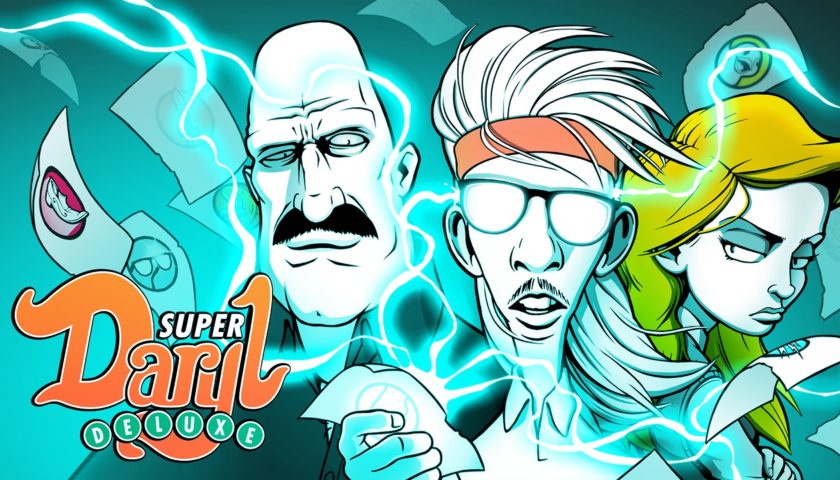 Let me introduce you to Daryl. He doesn’t say much and he bears a striking resemblance to Napoleon Dynamite but overall he is an ok kid. Daryl started at a new school today. It went about how you would expect. He met new kids, got bullied a little, found the lunch room and got sucked into a vortex in the science lab. The usual really. But Daryl has a problem. Something just isn’t right at his new school, there is something odd. It could be the Bear stalking the hallways, the floating pieces of dirt in the courtyard or the fact there is a Princess living in the air ducts. But one thing is for sure, Daryl is determined to get to the bottom of all this weirdness and find out exactly what the hell is going on.

Super Daryl Deluxe is, at its core, an RPG. Sure it has platforming elements and some touches of Metroidvania, but the central premise remains very much that of an RPG. It is an intriguing one too with a unique take on many of the traditional elements of the genre. The most notable of these is the skill system. Daryl has access to dozens of skills (which are purchased and discovered in-game) but can only equip 5 at a time. The key to this is equipping skills that work together as each has a cool-down after use. For example, a punch combo leads well into a fireball which shoots an enemy backwards making them susceptible to a lightning strike. A lot of the fun can be found experimenting with these skills and finding the perfect playstyle that suits. An added bonus is each of these abilities can be upgraded, increasing their effects and improving their compatibility with other skills.

The quest structure is just about what you would expect from an RPG. Get a quest from an NPC, locate required item/kill baddie/unlock door and return for a reward. What makes it fun is the range of NPC characters that Daryl interacts with. There are Jocks, Dungeon and Dragons players, members of the school Paranormal club, band geeks and bullies. Just about every high school stereotype you can think of. Along the way, Daryl also meets a disc-spinning Beethoven, a flippant Andy Warhol, a surprisingly calm Napolean and even a slightly morose Dracula just to name a few. The game is chock full of humorous depictions of both high school tropes and important historical figures, all ready to give Daryl his next crazy quest. The quest variety is pretty impressive too. Everything from fetching ingredients for the dodgy chef to finding a suitable musical instrument for the Air Duct Princess (which was way more complicated than you would expect.) The 666 trials to meet the music manager was a real highlight, I won’t spoil it but it featured a great mix of puzzles, combat and humour that left it firmly implanted in my mind. The only problem with the quests is that the directions are quite often vague and that can lead to a lot of aimless wandering. It is something that gets more noticeable as the game wears on and it really made me miss a clear set of instructions as opposed to the waffling journal entries present in the game.

The level design is also very creative. With each of the school’s classrooms warped into a twisted perspective on the subjects they represent. The Art room is filled with snobby art gallery patrons, weird drawings and talking sculptures. The History Room is a world war one battlefield. Even the science lab has had a spruce up, looking something like a rejected idea from Tron. These rooms all exhibit wonderful personality and the attention to detail is impressive. There is, however, one problem with the level design and that is there is a lot of backtracking. So players will be visiting these rooms over and over again, simply to run through them on their way to completing a quest. A fast travel system would have been a welcome addition to the game, that is for sure.

The real star of Super Daryl Deluxe is the art style and animation. Looking like an underground comic strip or something that a high school student would draw in their homework book, the look of Daryl and his adversaries is appealing and unique. The animation is breathtaking with every move a joy to behold. Special mention goes to Daryl’s level up animation which earned a smile everytime it happened. The fact that this game was predominantly developed by only two people makes this all the more impressive and it is a game that needs to be seen in motion to be truly appreciated.

Super Daryl Deluxe is one of the more unique titles available today. It takes familiar a 2D platformer and mashes it with an Action RPG while adding a dash of Metroidvania for good measure. Add to that the seriously impressive animation and art style and the game is well on its way to being a cult hit. The only thing stopping this from being an instant classic is some vague questing and a fair bit of backtracking, but otherwise Super Daryl Deluxe is a winner that is well worth the price of entry.