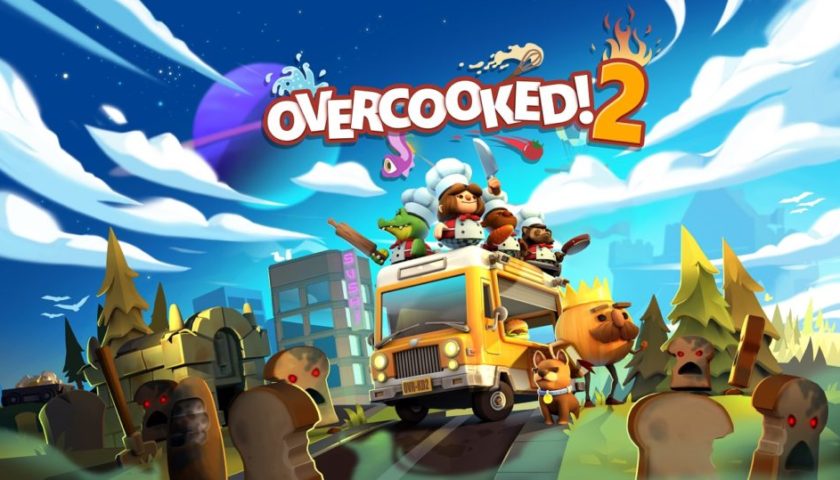 Cooking games haven’t exactly held a great deal of cache amongst the vast majority of gamers for quite some time, with the likes of Cooking Mama, Burgertime and an adaptation of Iron Chef all failing to resonate with us over many decades. Our perceptions of the genre changed significantly when the co-operative mayhem of Overcooked arrived in 2016. Suddenly, chaos in the kitchen was transformed into a fun party experience, and it prompted the developers at Ghost Town Games to return to the restaurant for a sequel in the form of Overcooked 2.

At first blush, there’ve not been too many changes made to the formula, and in terms of the moment to moment action, you’d be largely correct if you made this assumption. It’s many of the smaller touches that make the playing experience of Overcooked 2 superior to its predecessor. Coordinating your movements between players in co-op always presented its challenges in the original game, but that difficulty has been eased, and further complicated courtesy of the new throwing mechanic. Though not enormously beneficial when playing solo, tossing raw ingredients across the kitchen to a teammate in the desperate attempt to get a dish out the door to the always impatient (and apparently right) customer. This seemingly minor mechanic makes an enormous difference to the collaborative efforts of your team with clever throws saving time and allowing for a couple more dishes to sneak out the door before time expires.

The learning curve for this new mechanic, along with how to fit it in with the dash feature, won’t take long to adjust to, you only have to watch along in the latest entry of Patched (linked below) to see how in the space of just 45mins the lines of communication begin to open between even a party of three, jobs are assigned, plans of attack formed and the flow begins to occur. Of course, when things all go wrong, tensions and/or laughs can spill out with ease, but with every failure in Overcooked comes an opportunity to reflect and improve, and all too often I found myself repeating missions to ensure I left with the full three stars collected, something that didn’t take long once I’d learn the intricacies of the particular level.

I’m yet to truly identify how I best wish to play Overcooked 2, certainly the original was at its best when you were one of two players, so planning and execution were fairly easily managed as opposed to the chaos of juggling up to four player movement and priorities. With the sequel, it seems that Ghost Town have better balanced the levels to cater to larger groups as well as smaller ones. One thing is for sure though, the game still isn’t much fun when playing solo; the opportunities missed because one character is idling while you’re handling something else quickly grated at me, and I was quick to throw a controller to someone or jump online to continue my culinary journey whenever the opportunity arose.

Online functionality has thus far proven to run buttery smooth, though it’s no substitute for the madness that ensues in couch co-op, while versus mode has gotten a lot crazier thanks to the throw ability. Now you have the opportunity to troll your opposition team by tossing ingredients their way that they may not need, throwing their best-laid plans into chaos and stealing a win from the jaws of defeat. The controls can still be a bit clunky at times with the grid-based maps causing some issues when you’re looking to be precise or use the corners of your bench-space.

Though fairly safe in many respects, the inclusion of one simple mechanic has completely reinvented the way that you play Overcooked. A single stroke of genius, coupled with improved level design and the always endearing audio/visual style guarantees that Overcooked 2 will be in high circulation through any social events to come.