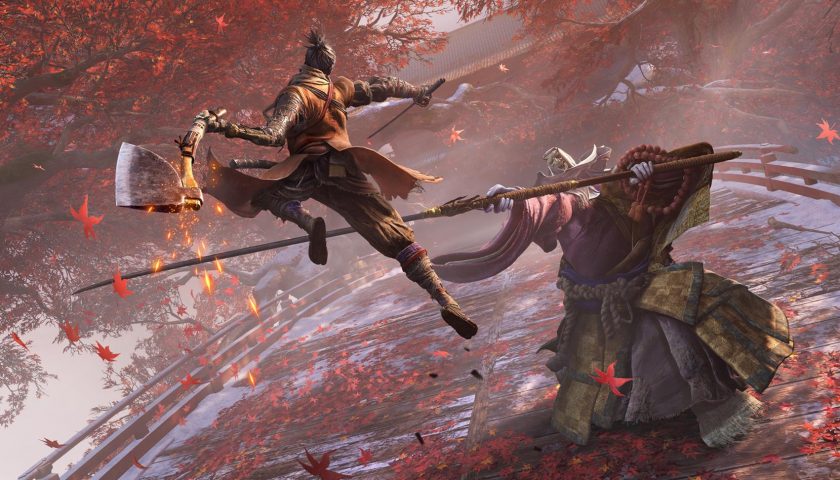 *Note: this piece contains area and boss spoilers from the opening half of the game. You’re probably ahead, but just a warning.

You’ll hear steel on steel for combined hours while playing Sekiro. Assuming you conform to the game’s insistence that you learn to parry. Even should you become a perfect parrying professional, this move still adds towards breaking your stance – which acts a bit like an invisible shield. Lose your stance and you’re toast, but this also works for enemies, so the aim is to always be more aggressive, to break their stance and deliver a nasty death blow.

You’ve read a hundred Sekiro reviews. You know the guff. Heck, you’ve probably played it more than I have. I’m not going to repeat all the stuff from those other reviews. Instead, I’m going to give you three tales that I think illustrate the Sekiro (and indeed the broader From Software) experience.

Tale one: The Drunk Bastard

Juzuo the Drunkard is a stupid bastard, just like all the enemies, actually. They behave more like automatons than real people, jumping to action whenever they see you, but also just as quick to return to their original positions if you break line of sight for a few moments. They’ll even walk right past the slaughtered bodies of their brethren without any reaction.

But Juzuo, man this was my first real hurdle. Firstly, he’s surrounded by about 16 bloody archers and shield guys and ninjas (it’s actually not that many, but it sure feels like it when you stumble across this encounter). My strategy for Juzuo soon became as follows: run around like a crazy chook, separating his companions and killing them off one by one, leaving just Juzuo, from whom I needed to run away enough to reset his alert status, so I could sneak around behind him and get one stealth hit in, thus reducing his two full life bars to just one. I did this several times, then enlisted a nearby NPC (thanks for just standing there, buddy, while thirty enemies ran past you, chasing me) to help distract Juzuo even more, but he is a hard hitter and it still took me a good fifteen or so attempts before I finally got him down. I also discovered during this encounter that if you get one stealth kill in and then manage to reset stealth again, the boss’s health resets to two bars, except this isn’t indicated above his head with a refilled second health circle, so you assume you’ve got one fight to go, only to have him “resurrect” for what feels like a third time. Cheeky, From Software, very cheeky!

The Blazing Bull. A more aggressive From Software enemy you will not find. This thing is all about sticking you good with its flaming horns. It was during this fight that I discovered the true value of unlimited sprint. In fact, you need to sprint the entire battle or you’re toast. That is, unless you perfect the timing of countering his charge attack, in which case the fight is a bit of a cinch, but I’m a big wuss when it comes to parrying so I chose the run-around-madly-while-keeping-behind-the-bull-and-hitting-him-in-the-arse strategy. It resulted in many, many deaths.

The thing about boss fights in these games is they also teach you how to feel like a god on the way to the fight. I found a shortcut to the bull that negated an entire courtyard filled with giant, club-swinging babies (that’s what they look like to me). Cutting through a side path, pulling myself to a rooftop and assassinating the guards waiting before the bullfight became a run of perfection that served to increase my confidence each time. THIS was going to be it, the time I beat him! Well, it wasn’t, but eventually, that time did come. And I learned from the fight and became a better player as a result. I learned to be aggressive, to side-step just out of reach and to never trust the game camera in a tight corner.

From here, the game opens up, with several paths available to explore. My favourite thing is how gingerly I move through new areas, checking corners, wary of any movement, with absolutely no idea of the layout ahead. What monsters and other nasty surprises await? But then, that slow erosion of fear as you familiarise yourself with routes and then before you know it you’re flying between grapple points like a Japanese Batman. As I explored beyond the Blazing Bull, I discovered poisonous geckos, highly accurate bomb slingers and a bridge guarded by keen-eyed snipers, but one more fight stands out and its that story I wish to close on…

After a beautiful rooftop jaunt, I found myself in the upper tower of the Ashina Dojo. This fight is completely optional, but I was so determined to get my effing upgrade bead off this a-hole that I persisted far beyond sanity’s edge. For starters, this guy hits hard, so hard that you’re dead within seconds if you don’t avoid his dual, sheathed attack. I have to admit to resorting to YouTube for a strategy for this one, something I don’t mind admitting because I feel that these games encourage the sharing of information on how to beat bosses, in much that same way that old hard games had me poring through discussion forums looking for just a hint on how to proceed in a difficult SNES or PSX title.

YouTube suggested I find an add-on for my prosthetic arm which imbues poison. Luckily, it wasn’t far away, so off I went to get it. Thus followed a bit more exploration of the dojo, a handful of satisfying stealth kills and the opening up of a few shortcuts. The level design really does feel like signature From Software, with the entire game being one huge, connected world that snakes around and back to itself. Already, there are speed-runners taking advantage of this, discovering glitch routes and finishing the game in under half an hour. That’s about as long as it takes me to inch my way, terrified, to each new boss encounter!

Anyway, I got my poison thingy, warped to the old dude at the start and got it installed, then travelled back to face my nemesis. The first run was almost as good as what I’d witnessed on YouTube. I successfully hit him with the poisoned blade and watched with a building smile as his health whittled down due to its corrosion. However, it stopped before completely draining his life, which meant that I either had to try and poison him again or actually engage like a proper ninja. Not wanting to waste my prosthetic arm ammo, I chose the latter . . . and was promptly slaughtered.

I was disheartened but not defeated. Right, I thought, I need to side-step twice whenever he attacks. The guy’s tell was a quick glint of his sword before it was drawn, so I had to practice being quick enough to side-step as soon as that happened, then attack once or twice before dodging or jumping back out of his attack range. What followed were several failed attempts, but each time I got him down more, eventually getting one life bar down for a death blow – I just had to get the second one down!

A quick look at my gathered ammo for the poison blade showed quite a stockpile. Stuff it, I said, and went in with pure waste on my mind. I was aggressive, getting him straight up with poison, then side-stepping like a mo-fo, etching away at his health. Before I knew it, he was one life bar down and I was poisoning him a second time, going in again, getting him, retreating, healing, waiting for the poison to finish. I nearly had him, he was at a quarter health. I had to decide whether to poison again (you can’t actually get a death blow just from poison, you still have to hit him for a final blow) or circle and attack for the final few blows. I chose the latter and paid the price – he got me with a double draw attack and I was dead. But – BUT!! I had Sekiro’s ultimate secret weapon – the gift of one resurrection. I didn’t hesitate, I pressed R1 and rolled back, checking my half-health and clicking R3 to lock onto my nemesis. We circled, my heart beating like a driving drum. The whole world zoomed in on that tell-tale glint of his, my finger hovering over Circle, ready to dodge left twice. There it was, I pressed the required sequence, now burned into muscle memory like a guitar player performing a solo night after night. There it was, my opening, I took it. Victory!

Heart hammering, I collected my upgrade bead and searched my defeated foe’s room. Slim pickings, given the battle that had taken place, but that was beyond the point. I’d learned so much, teachings that would stay with me for the remainder of my play-through. I’d stuck to my plan and emerged victorious. There are very few games that elicit this feeling of accomplishment. I decided it was a good time to take a break from the game. So many more battles awaited. It was wise to rest and reflect on my victory, for defeat is always just around the corner.