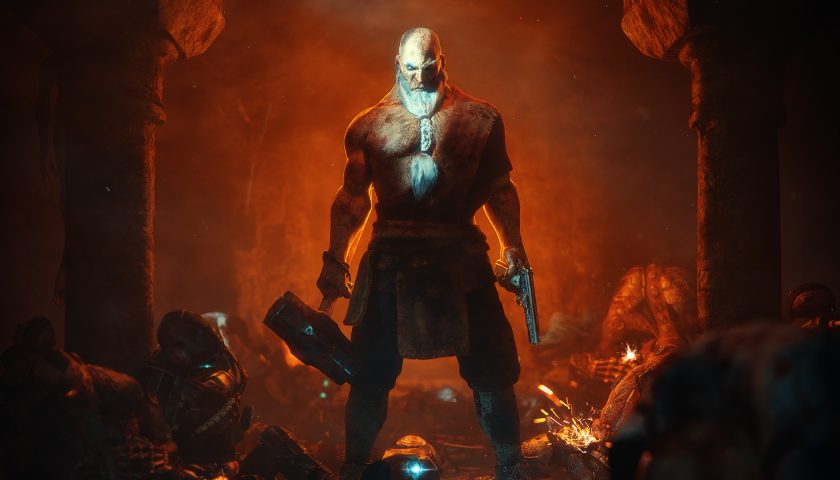 About this time two years ago, I was sitting on a tropical island in Malaysia, sipping a cocktail and finishing off a review for a game called Redeemer. I quite enjoyed it, it was the perfect title to keep me entertained in short bursts while I was tripping around with the family. Now two years later, the game has received an Enhanced edition and a console release, so I was keen to see if my feelings had changed and what improvements had been made.

The first thing I noticed was that the combat was as satisfying as ever. The top-down view is something of a novelty for the beat-em-up genre and it serves to separate Redeemer from the pack. Fisty-cuffs are handled in a simple manner. Punch, Kick, Parry, Contextual Action. All the buttons you need. Standing near a fireplace, spiked wall or table saw? Slap that contextual action button and watch a gory instant kill. Enemy flashes red? Bang on the parry button and watch them get their attack turned back on them. It is a simple, yet satisfying system that rewards those that take a little time and don’t just button mash. The top-down view also allows for an interesting approach to gunplay. Pick up a gun and the game suddenly becomes a twin-stick shooter. It is an elegant way to bring guns into a brawler and works flawlessly.

Graphically the game isn’t going to win any awards, but it certainly doesn’t look bad. There is a nice amount of detail in the environments and the main character and enemies all look great. There are a few technical issues however, some broken animations and some quite severe frame-rate drops, which is disappointing because I don’t remember anything like that in the original PC version which I mostly played on a slightly terrible laptop. Hopefully, the developers drop a patch for it soon, because it is a bummer to rush into a room full of baddies, ready to take them down with extreme prejudice, only to die because the frame-rate took a dive. It didn’t happen often, but it was certainly noticeable.

As for new additions in this version, the most noticeable thing is there are now upgrade trees for your skills. These are upgraded through use, so if you always use a pistol you will max out that tree first. Every level upgraded gives that particular skill a damage boost and every few levels a new perk. It is nice, well-thought-out addition that allows players to grow their skills based on how they play the game. The game has also been balanced and some of the difficulty spikes have been given the sandpaper treatment until they are nice and smooth. Previously, especially with big boss battles, the difficulty would jump significantly, leading to frustration. Now it rides a nice uphill slope that provides a good challenge without ever moving into frustration territory. Another new addition is Co-op, which works well from the very brief period I got to play it (not many people online) but it does seem to make things a tad easy.

I guess the only other thing I really want to point out to prospective purchasers is that this is quite a short game. Granted I had previous experience with the title, but this time around it only took me about 4 hours to finish the game on Normal difficulty. There are combat arenas and the aforementioned co-op modes but essentially the story mode won’t last a hell of a long time. Now, this isn’t a massive issue, it is, after all, a budget-priced title, but it is something to keep in mind.

In the end, Redeemer: Enhanced Edition is a better version of a game I already loved. It does some interesting things in a genre that isn’t exactly known for innovation and makes some solid improvements to the original title. There are a few tech issues, but I feel like they are only a patch away from disappearing and the game is quite short but it is still well worth a look if you are craving some skull-crushing action that comes with some tasty new ideas.