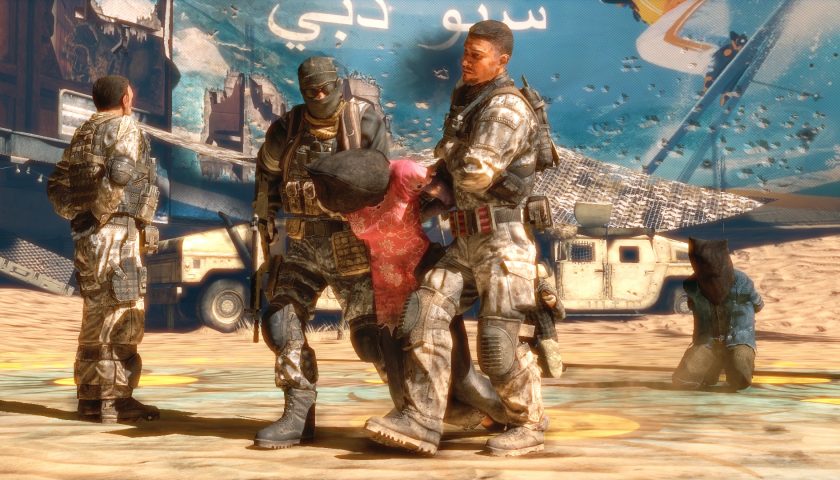 Do you know what I am sick of? The small but very loud section of the gaming community that is constantly chanting “keep politics out of games.” Not only are they supremely annoying, but they are ignorant as well. Political beats in video game stories have been around since… well stories have been told in video games. So to prove my point, here are 5 games that feature political stories that no one whinged about, probably because those likely too whinge about them are a little to dim to pick up on the themes.

Ok, I am going for an obvious one here but sometimes the bleeding obvious is where you need to start. Spec Ops: The Line was, for all intents and purposes, a basic war-themed cover-based shooter. The gameplay saw you, Gears of War-style, killing Middle-Eastern insurgents in a ruined Dubai. But that was just a giant bait and switch, the entire purpose of the game was to highlight the atrocities of war and what it does to not only the obvious victims but the soldiers carrying out orders from their political overlords. You didn’t have to dig too deeply to find a scathing commentary on the USA and its approach to the Middle East as well as the horrors they perpetrate in acting as a so-called global police force. The real trick this game pulled however was being praised by critics everywhere for its political story yet avoiding the chest-beating “no politics” backlash. Perhaps all the shooty-explody action was enough of a distraction to keep them away from their twitter accounts.

It could perhaps be argued that the entire Mass Effect franchise (and by extension just about every Bioware game) is chock full of political themes, but I am going with Mass Effect 2 because, at this point in time, it feels the most relevant. That reason is the Illusive Man. A politically-charged billionaire who seeks the promotion of his own cause at whatever the cost. Sound familiar? Replace “humanity” with “Rich white folk” and he is basically a carbon copy of one toupee wearing pumpkin currently residing in the Whitehouse. In fact, the only discernible difference I can see between the two is the fact that The Illusive Man appears to be quite intelligent, the Tumeric coloured crybaby however, not so much. Yes, I know Mass Effect 2 came about before Drumpf became President, but it wasn’t like he was a quiet, hidden figure before that and the characteristics of the Illusive Man could be applied to a whole host of spoiled, self-serving public figures over the years, Biff McTannen is just the latest one. I guess people were too busy with the steamy alien rumpy bumpy to worry about complaining about that hey?

Have I gone mad? How is the blue speedster in any way related to political discourse? Well, my friends let me tell you. The entire franchise is based around a megalomaniacal industrialist wanting to ruin nature and force its inhabitants to work for him. If that is not a strong indictment of capitalism and a stern warning as to how we are treating our environment, I don’t know what is. I am sure the fact that Dr Robotnik shares more than a few physical characteristics with various soul-crushing business leaders is only a coincidence right? SEGA, all those years ago saw the damage that was occurring to our planet and decided to use video games as warnings. You only need to look to another hit SEGA title of the same era, Ecco The Dolphin, for confirmation of that. Yet for some reason, we don’t see those Adani Mine supporters unleashing on everyone’s favourite Hedgehog, do we? Must be because the pretty colours of Green Hill Zone distracted them.

I am throwing the blanket over the whole franchise here. Assassin’s Creed isn’t only, at its very core, a political tale but it is set during key political events throughout history. Let me start with the whole Assassin’s V Templars thing. One group is about controlling the masses through the use of propaganda, religion and consumerism, the other about freedom of thought and belief. Look I hate to tell you, but that old chestnut has been at the core of politics since man first decided it would be a good idea to have someone in charge of everyone else. Let’s move past that though into the time periods these games are set. The American Civil War, The French Revolution, British Colonisation of the Caribbean, hell the very creation of democracy in ancient Greece. These are some of the most important political moments in the history of mankind, all with tales to tell and lessons to be learned in the modern era. Yet apparently the mountains of momentous political moments aren’t enough to motivate the anti-politics crowd to say anything on social media. I guess they are still too upset about the fact that gay relationships existed in ancient history to process anything else.

5. Any Game About War Ever.

Look, this is a really simple one. If a video game has a war in it, it has politics in it. From Company of Heroes to Call of Duty to Age of Empires, if two opposing ideologies are clashing, then by the very definition of the word, that is politics. It is literally impossible to have anything featuring war exclude political discourse, it can’t be done. So I guess I have just solved a massive problem for gamers everywhere. Those complaining about politics in games can no longer play anything with a war in it, leaving the rest of us to enjoy our games in peace. I am sure they will enjoy Tetris as a good example of a game with no politics in it… but then again, wasn’t it used during the cold war as a showpiece for Russian creativity and superiority? Isn’t that political? I guess that’s another game off the list.

So there you have it, just five of thousands of games that use political themes and motivations in their stories. I hope it opens the eyes of a few people out there and they realise what utter dribble they have been banging on about, but I imagine it won’t seep through their thick skulls. Or could it be that when they say keep politics out of games they actually mean keep anything that they are personally uncomfortable with out of games? No, it couldn’t be as simple as that could it?  Oh well, at least for the rest of us we can have a laugh… it is either that or cry.