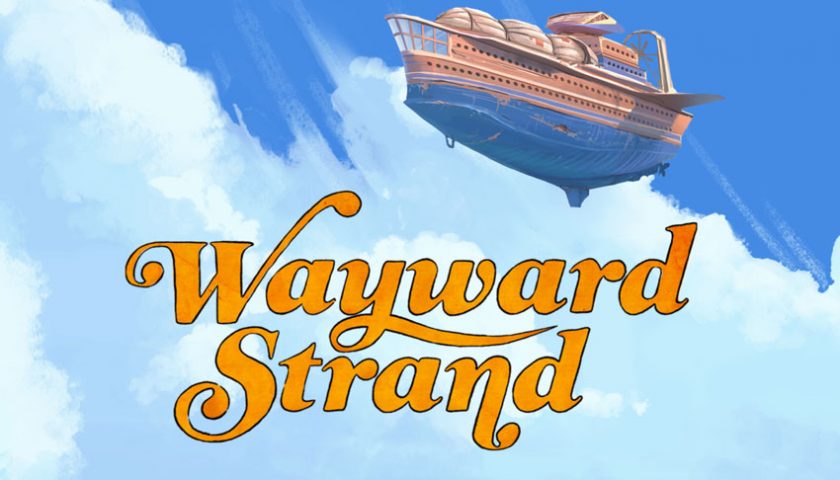 From gorgeous concept art by Matthew Dobrich to a vibrant Wes Anderson-esque pastel infused colour palette, Wayward Strand is a visually striking title, aided aurally by a soothing acoustic score. This comforting aesthetic makes sense when considering its setting, an airborne hospital floating gently above the coast of the Bunurong people’s traditional lands in 1970’s Victoria. Where this sort of location might typically conjure images of sadness and pain in an audience, what I’ve seen thus far of Wayward Strand instead filled me with the same kind of optimism that air travel, specifically dirigibles, inspired in futurist artists in the early 20th century.

Wayward Strand follows Casey Beaumaris, a 14-year-old girl making her first trip to the hospital. Over the course of three days, she is able to explore the ship as she sees fit while the inhabitants go about their routines regardless of player interaction. With such an intriguing premise, it is only fitting that Wayward Strand was awarded a place in the PAX AUS 2019 Indie Showcase. Player 2 spoke to developers Jason Bakker and Maize Wallin to find out more about this exciting title.

Stephen del Prado:  What was the initial seed that Wayward Strand sprouted from? While Sleep No More, The Last Express and Building Stories are mentioned as inspiration, I’m interested to hear from where the idea of a such a specific time period and combination of realistic elements in a semi-fantastical setting emerged?

Jason Bakker: Wayward Strand‘s setting came out of a desire for the team to explore a time in Australia that we have a connection to through our parents and families, but we didn’t experience ourselves. It’s a time and place that has possibly never been explored in games – this gives us an opportunity to share within the games medium a vibe of how this time and place was. Further, many of our characters are elderly, in the 1970s. These characters are around the same age as our great-grand-parents would have been, and would have had such fundamentally different experiences and perspectives to us, having lived through two world wars, seen the spread of electricity, the introduction of the automobile, radio and television. It’s a fascinating perspective to explore and try to capture within a narrative game.

Maize Wallin: There aren’t enough games set in Australia, let alone ones that allow us to hear from characters like this.

SDP: With a complex web of storylines intersecting in real-time, what challenges has the team faced in ensuring that players will feel satisfied with their time guiding Casey through the hospital? Would you go so far as to say Wayward Strand is ripe for multiple playthroughs to get the full experience?

Maize Wallin: One of the main difficulties of trying to nail this kind of experience, has been the pacing. The voiceover is a really important part of experiencing our game, and we don’t want the dialogue to be something you can easily click through and ignore. But, at the same time we know that a section of our audience (whether for taste or access reasons) will read the dialogue fast and want to move on. We think we’ve struck a good balance of engaging dialogue and conversation, where Casey’s interactions are satisfying but also make sense for a 14-year-old in the elderly ward of a hospital.

Wayward Strand is certainly ripe for many playthroughs. The way Wayward Strand allows you to build relationships with people you speak to, means that you do need to express care for people for them to open up. There isn’t enough time in a day for Casey to get to know everyone.

Jason Bakker: The balance we are trying to strike is that we want a single play-through to feel like a full experience, in which your choices of where to be, who to talk to, and which threads to follow, create your unique window into the various simultaneous stories. A key tenet of our design philosophy is to be respectful of the player’s time – so while you can play Wayward Strand again to dig further into a particular character’s story or motivations or just to find out more of the things that go on during Casey’s time aboard the ship, I don’t think it should be necessary to do so.

SDP: Given the number of characters created for Wayward Strand, have yourself or the team injected personal stories or interests to flesh out the world you’ve created together?

Jason Bakker: That process basically describes the development of Wayward Strand’s characters and their stories – they were initially defined and influenced by our memories and our personal stories.

Maize Wallin: The way we as a team have worked on this game, has made it inevitable. We really value concentrating on what each member of the team finds exciting for them, and expressive of who they are.

At the same time, the fact that Wayward Strand is set in Australia has meant that we’ve had a responsibility to include more perspectives than just the teams. We’ve worked with the Bunurong Land Council – Wayward Strand is set on Bunurong land – and the Wonthaggi Historical Society nearby. Goldie’s mum worked as a nurse at the time, so we’ve consulted several times with her. We’ve also consulted on representations of chronic health conditions in games, and we’ve researched what the trans queer experience would have been in the setting too. The game is rich with so many people’s stories.

SDP: How far has Wayward Strand progressed since the Freeplay Parallels Showcase in 2017? Oftentimes a lot of the work done behind the scenes isn’t necessarily obvious to the end user, so it’s always interesting to hear the perspective of those doing the work rather than simply comparing screenshots.

Jason Bakker: It has definitely progressed a ton! Even at the time, we were moving towards a more theatrical depiction of the life aboard the ship, and since then we’ve gone through multiple further iterations, in our attempt to better organising the various threads and character storylines in the most interesting way for the player. From our perspective now, the version of the game we showed at Parallels was as useful in defining what we were aiming for, as it was in determining what Wayward Strand wasn’t really about.

SDP: How confident was the team feeling when submitting for the Indie Showcase? Obviously, it’s a great benefit in terms of exposure and also recognition of the efforts you’ve all been putting in – what was the reaction when you discovered that Wayward Strand was selected as a winning entry?

Maize Wallin: We’ve worked on it for such a long time (three years!) that it is hard to know what to think of Wayward Strand. It’s a wonderful reminder when we get some external feedback like being selected for the PAX Indie Showcase. We’ve also had amazing feedback from our teaser trailer which we released in the last couple of weeks. It’s something that helps us keep going, and gives us a boost to know we’re going in the right direction.

SDP: Wayward Strand has been supported by Film Victoria since 2016 which is often cited as being critical to the development of many fantastic Australian indie titles. What more would you like to see done to further independent game development in this country?

Jason Bakker: Film Victoria has been incredible for us so far – we can honestly say that Wayward Strand wouldn’t exist as it is without Film Victoria’s continuous support. I would love to see organisations such as Film Victoria be given far more resources to fund a wider range of projects and teams – at the moment it feels like they do an incredible job with the resources that they have, but these resources are necessarily spread very thin over various teams and projects. Having a wider range of options for funding for games, particularly small games and artistic, interactive works from emerging creators, would be a wonderful first step.

SDP: At this point Wayward Strand has a 2020 release date – are you able to reveal a more specific time frame? Also, because it’s basically an obligatory question at this point, are there any plans for a Switch release?

Jason Bakker: We can’t reveal a more specific time-frame as yet; we are still seeking funding for the final production cycle, and the release timing is dependent on when we procure this funding and the requirements of the funding.

Maize Wallin: We’d LOVE to be on Switch. But yeah, we can’t get more specific about our release date just yet.

Two free titles, tied to the universe of Wayward Strand and designed to flesh out aspects of the world Ghost Pattern are creating, are available to play for free online through the following links: