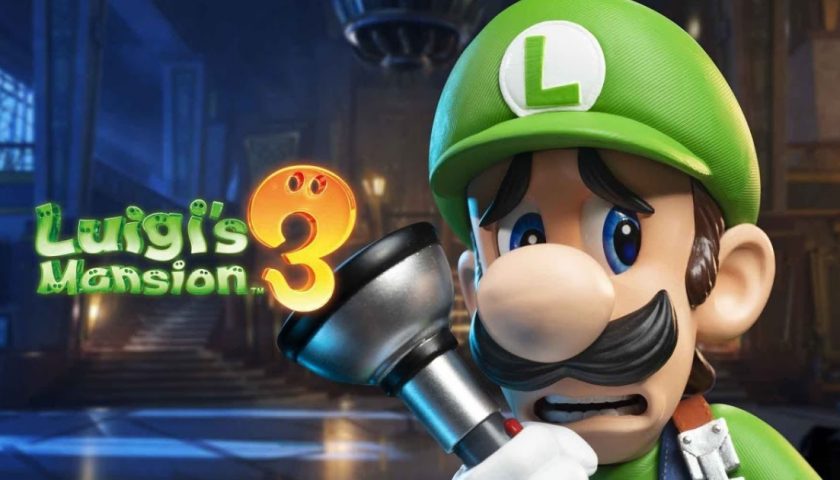 “I did it.” It’s a phrase my son says when he successfully waves off our helping hands, his fierce determination to be an independent human being burning inside his uncoordinated little body. The phrase is pure honesty. He did it, just him, he did the thing, achieved something. And we cannot argue with him.

When Luigi says, “I did it,” it’s with the same nascent confidence grown from pride and a little bit of surprise. It’s just as endearing, too, for Luigi exists in a world where baby babble is the normal course for conversation. It’s also rewarding for the player, who in actual fact “did it”. This is just one charming example in a game full of pure enjoyment.

Luigi’s Mansion is a game that delights in surprising the player. Luigi might skulk into a room, trembling in fear, but the player is never frightened of these Scooby-Doo frighteners. However, at times you’ll react as strongly as Luigi, just in a different way. For example, you might peek into a bin or wardrobe and although the game has trained you expect something to happen – be it a corny fright for Luigi or a glittering shower of gold coins – nothing does. Then, after a few beats, a handful of coins pop out! Ah, you got me, game! Good one! Well played. Luigi’s Mansion 3 is full of such moments, where the design almost borders on fourth-wall breaking: you know you’re playing a game and so does the game itself and we’re all having a grand time at that.

I am a huge fan of the way this series presents depth within small play areas. A little bit like lift-the-flap books, the way that you discover new layers is truly exciting and pleasurable. Luigi is able to interact with all manner of objects in various ways, primarily through his super-duper vacuum cleaner that can literally suck up hundreds of objects from a room and still keep on sucking (and blowing, and shooting out suction cups). Each room or large forum inside this haunted hotel/mansion is truly something to relish, packed full of things to suck up and secrets to find by experimenting with your move set. For instance, I knew that the vending machines with green lights would respond to a flash of my light, and did so several times. But then, by luck of holding down the suction cup aimer, the little icon locked on to the vending machine’s glass front. I let loose a sucker and it stuck, dangling it’s little knotted rope invitingly for my vacuum nozzle. I obliged, pulling it tight until the A button flashed for me and a press of said button saw the whole machine pulled over, breaking on the ground, revealing a secret door behind! Every single room has multiple moments like this. Heck, it’s even fun to explore rooms twice. I did this in one level and then, when the game took me back through that particular room, it had reset, but that didn’t matter because even though I’d already uncovered secrets within that room, this new narrative instance had added even more to do and discover.

Honestly, I’d be happy with just the exploration part of the game without ghosts. However, battling ghouls does help add variety and each encounter is fun, snappy and rarely very difficult. Even boss battles are generous in the way they have mechanics that give out hearts to replenish health lost while trying to figure out the particular rhythm required to beat them. I really enjoyed each boss battle, especially the mini-bosses that sometimes escape to other rooms, leading you on a merry chase throughout a floor.

There’s always some new surprise, too. I thought I had the move set figured out, then in one level you’re given a grinder/saw type tool that practically destroys everything you attack with it – grass, wood, flooring, support beams, plants, furniture. What followed was a gloriously maniacal spree as I razed everything within sight. Other new elements are present, such as the slam mechanic and Gooigi, a green doppelgänger you can create with a click of the right thumbstick. Gooigi is often needed whenever the thing you need sits behind bars or grates, as he can simply ooze through them, allowing you to explore those spaces with Luigi’s full move set. You can also use Gooigi to add oomph to your suction, double up to moving heavy objects and set him up to blow turn-wheels while you then control Luigi to cross a bridge or enter a lift powered by that wheel. Gooigi’s only limitation is that he disappears whenever he gets wet, so of course puzzles tend to employ puddles of water or bucket-throwing ghosts who dampen Gooigi in the middle of an environmental puzzle.

Luigi’s Mansion 3 delights in presenting neatly packed rooms full of physical objects. I loved simply walking around, bumping into tables, having stuff roll off and then thinking, “Yeah, I’m gonna suck you up in a moment!” The animation is gorgeous, from Luigi’s various reactions and stances to the way curtains flutter invitingly, teasing you to catch them in your nozzle. The game awoke in me the desire to play more games where you are a totally incompetent house cleaner. I can’t help but be impressed at the sheer number of 3D physical objects that had to be created and placed in order to present such believable spaces – spaces that elicit actual glee as you press the right bumper and whiz Luigi around like a hyperactive child in a glassware store.

The slam mechanic, which I mentioned earlier, is a welcome addition. I’ve heard some criticism that it makes things too easy, and I guess it does reduce the comical aspect of being dragged around by ghosts as you hang on to their tails, but it works in this game because there are often multiple ghosts around and you need to utilise slams to effect crowd control. I’m also quite okay with a game being easy, I don’t see that as a negative at all. While I haven’t actually died in Luigi’s Mansion 3, I have gotten very close several times, so the balance feels fine to me.

Finally, there’s the co-op. While I am quite happy to stick with the single-player, the inclusion of these modes will elongate the experience for those with Switch buddies. Once you’ve unlocked Gooigi and played through the tutorial, you can play cooperatively with each person taking one half of the Switch controller. There’s also the Scarescraper and Screampark, both of which support up to 8 players. The Scarescraper is a co-op experience where you tackle increasingly difficult challenges to defeat ghosts, find hidden toads and other challenges. The Screampark offers several competitive modes such as collecting the most coins, defeating the most ghosts or playing in teams to load a cannon with cannonballs (while stealing balls from the other team). I don’t have the time to invest in multiplayer like I used to, but the inclusion of these modes is definitely generous considering how complete the base game is.

I think what sticks with me most from Luigi’s Mansion 3 is how it presents such pure fun in destruction and discovery, particularly in small spaces – rooms, en-suites and hallways. It reacts to the player and plays with you too, in an effortless give-and-pull rarely felt in gaming. I just want to play vacuuming games exclusively for a while now, there’s something almost primal in the pleasure derived from Hoovering up mice, pumpkins, plates, billiard balls, leaves, paper, curtains, coins and so much more.

Luigi’s Mansion was reviewed on the Switch, with the game having been purchased by the reviewer.