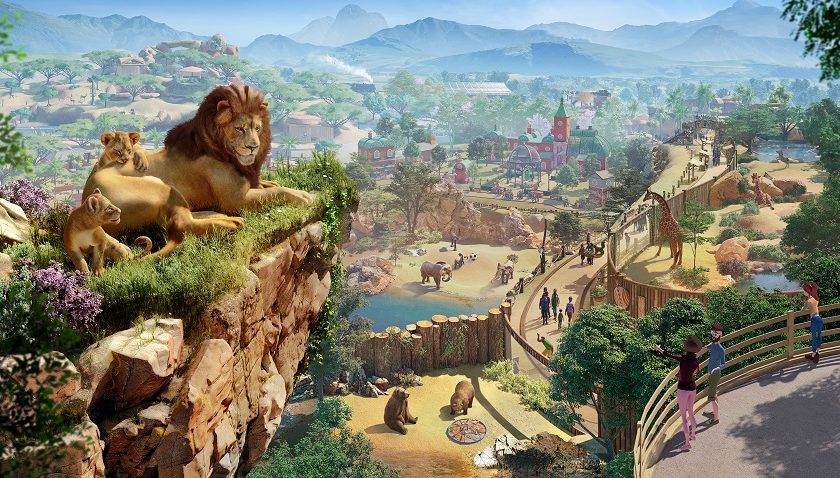 Planet Zoo – A World of Wonder and Menus

If you have been following this site for any period of time you know that I love some sim gaming. It stems way back to my youngest gaming days with the original Sim City and has carried me through to this day. Tropico, Two Point Hospital and Planet Coaster are some of my most played games on my Steam list, so when the developer of the aforementioned Planet Coaster (and the Rollercoaster Tycoon franchise before that) brings out a new title, I sit up and take notice. That title is Planet Zoo and it brings everything I would expect of the genre to a Zoo setting, both the good and the bad.

I want to get the slightly down stuff out of the way first. Planet Zoo has menus. Lots and lots of menus. Navigating them can be both daunting and a chore. Sadly they are part and parcel for the genre but in this title, it seems that there are even more than usual. There are menus for building, menus for animal sales, menus to see how your animals are doing and even sub-menus under the menus to get more (required) detail. Unlike a few similar titles, there really is no way to avoid these menus if you want to succeed. The game is all about keeping the animals and the visitors happy and the only way to do that is via this absolute mountain of menus. It is, without doubt, daunting and I can see players new to the genre bouncing off this pretty hard.

Which would be a shame because the rest of the game is satisfying in a way only the best management sims are. Building the perfect habitat, designing clear paths, making money year after year, adding personal touches, it is all there. Once you find your grove it is so easy to find yourself lost in the routine, running the park and tweaking the numbers to make everything run at a perfect hum. The systems in place are complicated but thanks to a highly competent tutorial/campaign mode, by the time you are creating your first sanctuary from scratch you are well equipped to handle whatever the zoo can throw at you.

Speaking of Zoos, the real stars of this game are the animals. Wonderfully animated and full of personality, these furry, slimy and feathery attractions are a clear highlight. Not only that, but the game is chock full of information about all of the creatures you have access too. Planet Zoo has more information than an Encyclopedia (that’s a book version of Google kids) and is about a million times more entertaining. This is the sort of game I would have convinced my parents was educational, circumventing their restrictions on game time. The rest of the game has a wonderful amount of detail as well, with lush greenery and some great animations from visitors and park staff as they go about their business. It is almost a cliche that a game featuring so many cute animals be considered charming, but Planet Zoo is exactly that.

There are the usual array of game modes on offer for a game of this type. I mentioned the campaign before which is really an extended tutorial, guiding players through set in-game scenarios as they get a grasp on the systems. The main mode for most, however, will be the excellent franchise mode. This mode gives players the world to build zoos and trade animals with other players online. It is pretty much one big shared community and suits the style of gameplay well. I especially enjoyed the small touches like the avatars of friends showing up in my Zoos, wandering around like normal patrons. There is then a Challenge mode which is much the same as Franchise only it is offline and there are random challenges thrown into the mix to make things tougher. Finally, there is everyone’s favourite relaxing mode, Sandbox, where money doesn’t matter and it is all about creating your perfect Zoo without resources causing a worry.

Another thing worth noting is the sound design. Not something that is usually a big deal in this sort of game, Planet Zoo exceeded my expectations with some toe-tapping background music and careful attention to recreating realistic animal and zoo sounds. The sound design lends a realistic, yet cheery atmosphere to proceedings, which goes a long way to counteracting the chore of ploughing through menus. The only downside to the sound is some of the voice acting, especially during the campaign. Overly forced, British accents seem to be the order of the day making much of the (somewhat sub-par) dialogue seem cheesy and hamfisted. That being said, it is a minor gripe in the scheme of things, not something that should influence your desire to play the game at all.

Planet Zoo is basically exactly what you would expect from a Frontier Developments management sim. Boatloads of both charm and menus. Your mileage will depend on your tolerance for digging through layers of text, but if you can stomach that you will find a wonderfully satisfying zoo experience. Come for the cute animals and stay for the satisfaction and pride found in creating a thriving animal sanctuary. If that sounds like your cup of tea, then what are you waiting for? The lion cages need cleaning and the Hippo’s are running out of food. You aren’t going to let them down are you?