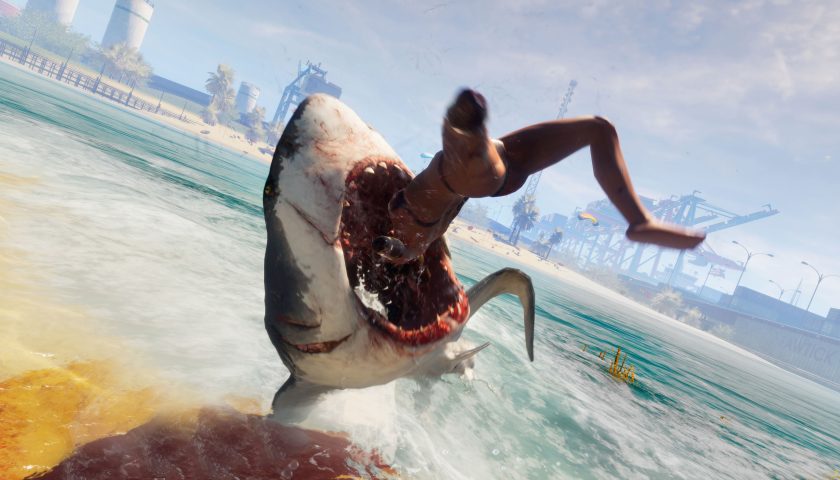 Maneater: Hands-on with an Aquatic Killer

The sleek lines, the cold dead stare, the vicious array of razor-sharp teeth, there is nothing more terrifying on this planet than a shark on the prowl. Capturing that feeling has never really been attempted in video game format. Sure there have been “shark” games in the past, but there has never been an attempt to truly give the player the chance to feel that deadly power for themselves, to embrace the role as nature’s premier predator. Well, Maneater does exactly that, all while being narrated, not by Sir David Attenborough, but by Cyril from Archer.

That really highlights the juxtaposition in Maneater’s presentation. While you are stalking a group of unsuspecting beachgoers, Morty’s dad (Actor Chris Parnell) is pondering the fact that groupers are known to eat baby sharks, so really it is fair for the shark to eat them in retaliation. So a serious game this is not. But that is fine. Playing a simulation on shark behaviours would probably be boring, whereas a Shark based power fantasy, well that is something I can get behind and that is clearly what the developers have in mind for Maneater.

Thanks to a recent press event, I was able to get about an hour of hands-on time with the game and honestly, I am left wanting more. There is a caveat however, because I am not sure how much more I want. Let me see if I can explain:

The game started out with me taking control of a fully grown bull shark, learning the ropes as one of the ocean’s biggest baddies. Eating, swimming, attacking, stalking and the somewhat unrealistic tail-whip attack are all easy to grasp and it isn’t long before I am chomping down on unsuspecting tourists and local aquatic life in equal measure. Before long, I have consumed enough man meat (minds out of the gutter folks) to upset the local authorities because they begin sending the shark hunters after me. I made short work of those fools thanks to my suspiciously unrealistic dodge move before I met my match in the form of big game hunter Scaly Pete. Sporting scars, spears and a Louisiana accent, Pete made short work of me and hauled me into his boat.

This is where the real game starts. After hauling the shark onto his boat and heading off to the bayous, Pete performs a cesarean on the apparently pregnant bull shark, pulling the pup shark out. But as Cyril Figgis puts it, the instinct to survive is strong and the pup shark bites Pete’s hand off and gets flung into the murky Louisana waters. Here, I took control of the pup and began the long road from a small threat to the supreme killer. Eating fish, achieving mission goals, finding sunken treasure and basically doing sharky things earned me DNA points which could be used to grow my snappy friend and upgrade his skills. PR present on the day promised me that later in the game I would be able to dive into fantasy with my shark upgrades, by evolving bone armour and other unnatural abilities.

I guess the simplest way to describe the game is that it is a 3D version of the mobile title Hungry Shark. That is selling it short though because there is much more purpose to Maneater. Though I do worry how long the enjoyment will last. What I played was highly enjoyable, but I am concerned that I have now seen the game’s entire book of tricks and that enjoyment will fade over the course of a full title. I really hope that the developers have some surprises in store for the game because if they don’t this could get old rather quickly.

In all, I have some reservations about how long the joyride will last, but otherwise, Maneater is looking like a cracking, unique title that will fill the need of every Sharknado fan on the planet. I know one thing for sure, my kids are going to love this game and if I am honest I may just fall in love with it too.