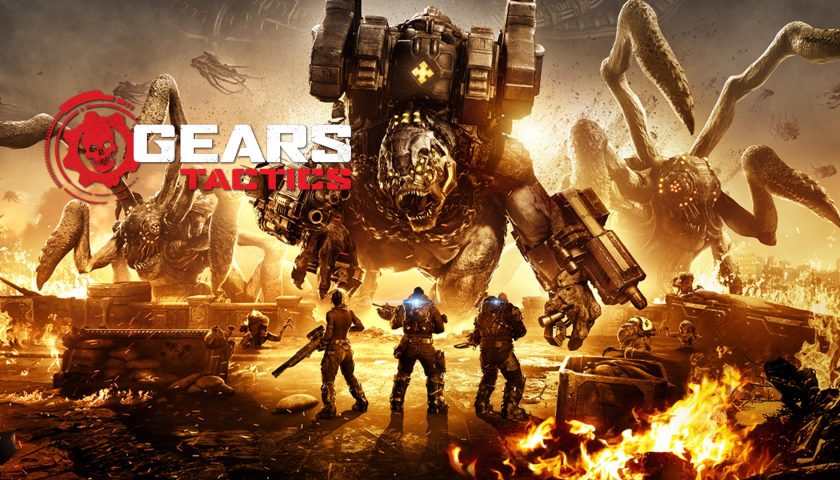 As the Gears of War franchises prominence grew with each release of the original Xbox 360 trilogy, you would fairly often hear whispers of a Tactics game set in the same universe. Forums and social media would sometimes erupt with excitement at the thought of an XCOM-styled Gears of War title, with many believing that the franchise, and the many unique forms of Locust, would be the perfect fit for the genre. As the trilogy ended though, and a new one began, the hopes seemed to disappear down an e-hole, but just when all hope seemed lost, up sprung Gears Tactics. Can this combination of Gears, The Coalition and Splash Damage soar high like a Reaver or should it be shot down by the Hammer of Dawn?

Set in the rich period of the Gears universe before the events of the original Gears of War, Gears Tactics’ tale is a fascinating one that directly links to the original trilogy, but also to the events of the two entries since then (Gears of War 4 and 2019’s Gears 5). As Gabe Diaz, you get roped into a mysterious operation that takes him on a secret COG (Coalition of Ordered Governments) mission to assassinate Ukkon, a Locust scientist responsible for creating some of the Locust’s most feared weapons like Brumaks and Corpsers. Recognising the threat, the COG are sending Gabe along with new partner Sid Redburn to stomp out the threat before Ukkon creates something that the COG couldn’t possibly fight back against.

What unravels throughout the journey is one of the most engaging stories yet told in the Gears of War universe. It doesn’t boast the same emotional depth that we see from Dom’s tale in Gears of War 2, nor does it drive a larger narrative forward like all of the core, numbered Gears of War games do, but Gears Tactics connects many dots, establishes backgrounds for pivotal characters in the universe and more. You’ll come across or

The gameplay overhaul is the most notable change present in Gears , and it’s hard not to see a lot of XCOM in the DNA of Gears Tactics. However, as much as it might look to some like XCOM at first blush, there are many included elements from the Gears universe that inject some additional flair. Unlike XCOM, Gears Tactics is a little more vague about your range of movement, with little exploits emerging depending on how you use cover, maybe adding precious meters to your target, and increasing your hit chances substantially. Typically each player-controlled character will have three movements/skills/shots that they can take, but with careful strategy, as well as considered allocation of skill points accrued from leveling up, and it’s quite possible to accumulate in excess of 5-6 turns. Snipers, in particular, can become incredibly (perhaps excessively) powerful if players distribute their skill points correctly and string the right pairings together in combat, getting you out of a pinch. There are 5 classes present, the aforementioned Sniper, then Vanguards, Scouts, and Heavys, who take on the offensive duties as well as the Support, who does just as the name would suggest. Each class boasts a different weapon, and each class has their own strengths and weaknesses, just as their brooding, unearthed enemies do. With 150+ different skills available via the various classes skill trees, there are numerous inventive ways that players can outfit their team and tweak them to work well with their teammates.

Compared to the likes of XCOM, Gears Tactics tends to throw enemies at you in far greater number. They don’t soak up rounds as the aliens of XCOM do, but their number causes a different kind of headache for the player to wrestle with. The majority of the time you’ll be in control of a party of 4, and even with a fully reloaded team and 12 shots to fire, it may not be enough to curb the number of Locust coming for you, making containment, preservation and the games overwatch ability especially important to your continued survival. As the game progresses you’ll happen upon Stranded or even captured Gears in need of help. These new recruits should be given the same amount of love that the core cast gets, because Gears Tactics throws a few curveball missions at you from time to time that limit who you can or cannot bring with you, and suddenly you’re exposed needing to bring a severely under-leveled partner with you into the field.

The mission types, like the locations you fight in, are quite limited in their variety. Rescuing abducted civilians, scavenging equipment boxes while keeping out of range of pursuing Nemacyst, control missions, and crowd control missions are the standard fare, and throughout the campaigns 30+ hour playtime you’ll play through dozens of each of these, likely testing your patience after a while. Gears Tactics, especially as you get deeper into the game’s second act, and most definitely with its third, can feel quite bloated due to the addition of side quests. The thing about these “Side Quests” is that they’re not actually on the side at all; at certain junctures in the narrative, and before you can begin the next core campaign story, you’ll be forced to choose between several optional objectives, and only when you’ve successfully completed enough of them will you be allowed to progress. You will, of course, be rewarded with more XP, and loot drops, but I couldn’t help but feel like a tighter, shorter experience, with a higher XP/loot drop rate would have benefitted the final product more.

As this is a Gears game it almost goes without saying that the game looks stellar. From character models (though the recruits can look a little Mr Potato-Head like sometimes), to the menacing Locust, and of course the stunning cutscenes, Gears Tactics really pops. The audio too really excels with a typical Gears soundtrack of frantic highs and somber lows puncturing the entirety of the playing experience.

Gears Tactics won’t be for every Gears fan, simply because of the genre switch, but for those looking to embrace something new, they’re going to have the pleasure of experiencing yet another wonderful take on the franchise, only from a totally new perspective. The narrative leaves you in an interesting position too, leaving me hopeful that this won’t be the only time we get to witness a Gears story play out from a bird’s-eye perspective.