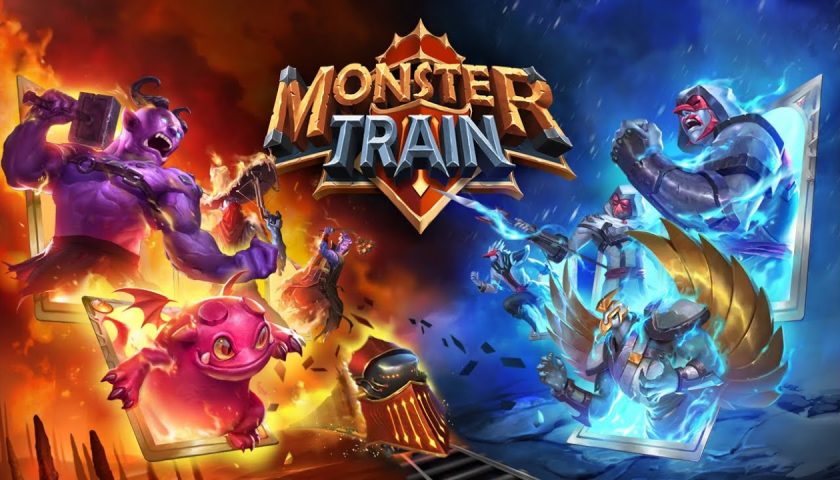 Monster Train – Dealing Up Some Hell

Collectable card games have just never been my thing. I have tried, lord knows I have tried, but I just can’t get into them. My brain isn’t wired that way. While kids at school were playing the Star Wars CCG, I walked the other way. Magic: The Gathering just takes too much brainpower for this old head and not even the phenomenon that was Hearthstone could stimulate the pleasure centres of my brain. On the other hand, I adore a good rogue-like. I was hooked when Rogue Legacy first came out and frankly I have probably spent more time on Hades and Dead Cells than just about any other game I own. So what happens when someone comes along and jams the two genres together? Would my love of the rogue-like gameplay loop cancel out the fact I can’t find enjoyment in CCGs? Well, when the game is put together as well as Monster Train is, the answer is a resounding yes.

Monster Train is a little bit of a complicated sell, so bear with me. You start the game by selecting one main faction (which will give you your hero card) and one secondary faction. Initially, there are only two factions, but as you progress you will unlock three more. Each of these factions has a range of cards that are unique to that particular group and each has different strategies as a result. Once you have made your choice, the game proper starts. The world map is a series of locations that run along a train line, each can be visited once before you reach the end of the line and battle for that map. These locations give bonuses in the form of new cards, new artefacts (which provide permanent stat boosts and the like) and merchants where you can buy improvements for your unit and spell cards. Once you have visited all the locations along the line you then venture into battle, with your forces of hell taking on the best Heaven can muster.

This is where it all comes together. The train is broken up into four levels, three battle levels and one for the Ember Heart. Each card has both an Ember cost and a space cost and each of the three battle levels have only so much space. Your turn starts with three units of Ember and the goal is to play the cards in your hand as best as possible, taking into account how much space the soldier cards take and which combination of spells will best protect the Ember Heart. Once all cards are played or ember spent, you can end the turn and attack the invading enemies. The enemies start at the bottom floor and work their way up. If they aren’t killed in that turn, they rise to the next level. This cycle repeats until the boss fight in which, the big baddies (or goodie depending on your point of view will continue on each floor until all of your units are wiped out. Hopefully, you can put enough hellspawn units and plaster it with enough spells to prevent your train from being destroyed preventing it from moving onto the next map.

Being a rogue-like, you will die and you will die often. But with each run, you gain experience for your chosen factions, which leads to upgraded and new cards, giving more battle options for your next run. There are 8 levels to conquer and a full run, if you are successful, takes no more than an hour. Despite how complicated it may seem it is all very easy to grasp and it quickly becomes second nature. It is honestly amazing how well the developers have put this very complex and potentially off-putting gameplay loop together in a way that is both welcoming and satisfying. Once you feel comfortable, you will be putting together deck strategies and combat tactics like you were born to it.

Graphically the game uses a simple, cartoony aesthetic that, while not exactly taxing on your system, looks pleasant and conveys a sense of personality and humour. All of the demons and angels have had quite a bit of care taken with their design and look both familiar to common archetypes yet unique at the same time. Sound design is also simple, yet effective. Sound effects are thematically appropriate and the game is supported by quite the pleasing musical score. The level of polish in the presentation aspects of Monster Train belies the game’s indie label, easily the match for similar titles that have a much larger budget.

If there was one thing I was worried about with the game is its variety. I feel like after 12 hours or so, I have seen the game’s entire bag of tricks. Even with the custom challenges which can be set by friends, the game is essentially the same each run as it can’t rely on the random level generation of other rogue-likes. With games like Dead Cells, I have put in dozens of hours and am still discovering new things each run, yet I feel like there is little left for me to discover here. I worry that Monster Train is going to lose its lustre because of this and will fall by the wayside. Hopefully, the developers continue to support it with new cards, factions and even maps. It would be a shame for Monster Train to disappear quickly thanks to something like a lack of variety.

That aside, Monster Train is a smashing new rogue-like that just happens to be card-based. Don’t be put off by its CCG stylings because here is a game that bridges genres successfully making an addictive and satisfying experience in the process. It oozes polish, makes complicated mechanics easy to grasp and most of all provides the perfect burst of gameplay that will keep players coming back for more. Don’t sleep on this one folks because it is well worth your time. All aboard, the Monster Train is leaving the station and you don’t want to be left behind.

Monster Train was reviewed on the PC with code kindly supplied by Good Shepherd Entertainment.