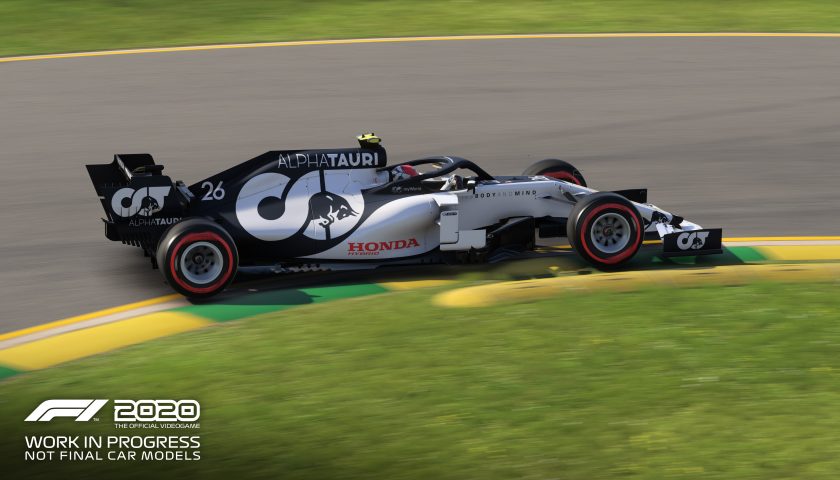 Ivan Ripplestrip yearns for glory. Ever since seeing his billionaire father die horribly in a street parade accident, Ivan has wanted to go fast. To get away from it all, to achieve perfection, to chase the future itself. And so, this rich young man has moved up the ranks, from pony rides to shopping centre carousels and beyond. It has been his dream to push the limits of physical speed and it is through Formula One that this budding speed artist wields his brush, dipping it into the ink of perfect apex acceleration, cleaning it with the cloth of a perfect pit stop.

Ivan may be the face of Ripplestrip Racing, but he has built around him a team of hopeful professionals, rallying behind him to pursue podium presence. The only thing holding Ivan back is Ivan – and the complete noob controlling him. Luckily, F1 2020 is completely open to the less experienced racer fan. This year’s My Team career offers plenty of ways to customise the way you progress through a calendar of F1 events, including the tech war and media suaveness required to not just race but become a real figurehead inside the sport. Let us explore some of the specific ways in which the noob racer is invited into the enticing yet daunting world of Formula One racing.

Being Mr Moneybags, Ivan leads the team as both driver and owner. This makes every action accountable, compelling and self-serving. My Team mode introduces you to the world of F1 from the ground up, leading you through all the requirements for a race proper, which is perfect for a clueless player like this writer.

During practice laps, your team will present several challenges to complete, which hone your vehicle for the race. These play out like mini-games, your team in your ear, urging you to chain corners together or reach top speed and so on. As you complete these, you earn resource points, which are used to upgrade and adapt your vehicle.

There are heaps of assists that can be customised to make the experience feel like an arcade racer or something closer to the real thing. You can also automate the management of your team, such as auto-filling the calendar with events each month and even asking for recommendations on which area to next invest on the tech tree.

If Ivan makes a mistake out on the track, there is the magical ability to rewind time and resume from a place of his choosing. Use of flashbacks is limited, but by gee, they can get you out of a tough spot and often mean the difference between a decent finishing position and ending up way down the list.

Media interviews affect your team, with the answers you give boosting various departments as they hear you singing their praises or stating intentions to improve. This is a bit like The Walking Dead’s “X will remember that”. The effect of your choices is all a bit vague, but it brings about a sense of ownership and influence which further draws you into the experience, especially as a rookie racer.

The management side is surprisingly enjoyable, and you won’t mind only getting a few laps in each hour of play. It helps build a sense of purpose, driving you to better your team and career. It also makes the long stretches of track time something to look forward to rather than make them feel like marathon after marathon.

You can simulate a lot of your career, albeit at something of a cost to where you would likely finish as a capable human being. Some days you just can’t be arsed driving 14 laps – and that’s the short course! You can simulate practice sessions and the main races. I simulated one race after qualifying 14th and came 17th, so it’s up to you if you want to reach for the podium or float in the middle of the pack. Simulation is a nice option to have if you just want to manipulate the management side of things without having to drive very much.

It quickly becomes apparent that F1 is all about the money. You can’t get good cars or drivers without millions and you’ll need to attract sponsors to I crease your weekly income so that you can invest in research and keep your vehicle operating at the optimum level. You can also purchase upgrades for your driver, such as a social media team for $275k, which boosts driver acclaim by 10%. There are plenty more expensive upgrades just out of reach until you start pulling in the big bucks. This simple structure gives the complexities of the sport a clear and hopefully achievable set of goals and keeps players interested in moving forward to the next menu, season, event and so on.

Things have only just begun for this young upstart. He has a lot to learn, and even more to unlearn. He is an unknown quantity in the sport, a grain of sand in the undies, rising up with tenacity to chafe those at the top. Of course, he’s going to make mistakes. He’s going to blow off steam and not listen to his pit crew one time, costing him the championship and the love of his life. He’s going to skirt close too close to danger and suffer a horrible crash, almost joining his father upstairs.

But such scars will just make his determination to burn brighter, fuel the fire to climb that Formula One mountain and stand atop it, spurting champaign on those below like some orgiastic release. And when all has been sacrificed for victory, Ivan will descend from his sticky victory and catch the intense gaze of a stranger in the crowd. The hooded stranger will move in close and whisper into his ear, “Ivan, I am your father”.