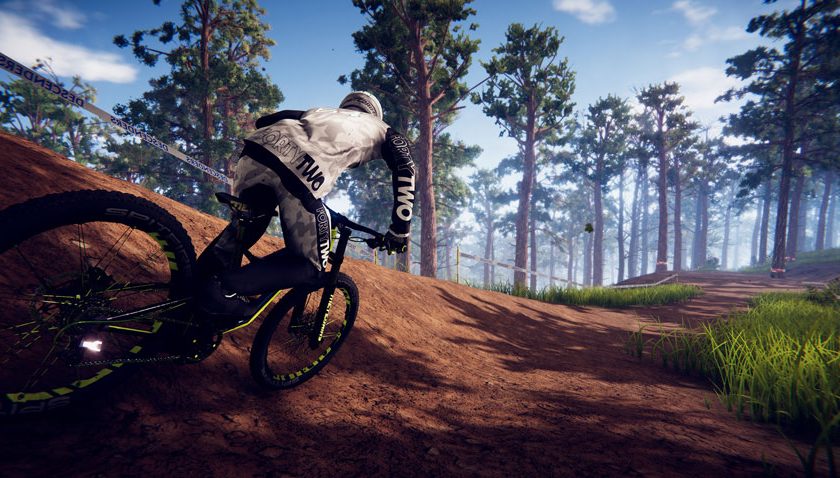 Descenders – Zen and the Art of Mountain Biking

Generally, when discussing ‘extreme sports’ video games terms you’d prefer not to hear include ‘meditative’ or ‘calming’ – words that are almost the antithesis of a genre that prides itself on pulse-racing action and booming licensed soundtracks. Descenders manages to include gameplay that is sure to get your adrenaline pumping but does so juxtaposed against a loose structure which prioritises slow skill progression on the part of the player alongside a stellar electronic soundtrack that goes a long way to set the mood developer RageSquid is going for.

From the opening moments, Descenders is almost defiant in its refusal to push the player in a particular direction, with one singular exception; don’t crash. Upon booting the game, players are free to roam a reasonably large open area which also doubles as an interactive menu of sorts – bikes and characters can be customised, tracks can be crafted, multiplayer lobbies are on offer, the Daily Challenge run can be attempted but Career Mode, which spans four areas across both day and night, is the main event.  Ostensibly a downhill mountain biking game, Descenders focuses on a core gameplay loop which incorporates elements of risk/reward that works so wonderfully I often found myself having played for much longer than I’d intended, such is the ‘one more run’ mindset it facilitates.

Make no mistake; Descenders is absolutely brutal to newcomers as there’s very little on-boarding and many players, myself included, will probably end their maiden Career attempt in under 5 minutes through a combination of ambitious trick failures and an inadequate grasp of the control system. Rather than relying on face buttons, Descenders utilises the triggers and analog sticks to execute all manoeuvres; pulling back then pushing up on the right stick will execute a bunny hop, holding L1 and pushing in a direction will add a trick onto a jump while the left analog stick controls movement on the ground and rotation in the air. The amount of times I began spinning wildly out of control in mid-air and landed head first on the ground is quite frankly embarrassing, but it also ensures I’ve felt a sense of player skill progression over time as I fully grasp the extent of my own abilities, the limits of my rider avatar and become more familiar with the risk/reward system at the heart of Career mode.

Career Mode takes place across four increasingly difficult maps, each dotted with a series of nodes. A node represents one randomly generated level graded upon three different characteristics; steepness, curves and stunts. Nodes also feature modifiers at regular intervals such as the Medic Camp, which grants an extra life upon completion or Helmet Cam which forces play from a first-person perspective. Alongside this, each level also has a Bonus Objective that rolls like a slot machine wheel whilst the terrain generates and may or may not suit the level itself. Some, like ‘Perform 2 Backflips’ are easy enough to fulfil when facing a level with a decent number of jumps, but become nightmarish on an extreme downhill slope with nary a jump in sight. Each Career mode attempt starts players with four ‘lives’ which are lost upon crashing – play too recklessly and they can be gone in moments. If enough points are accrued on each descent through successfully landing tricks, a ‘Crew members’ can be chosen at the end of a level which provides a net positive effect going forward for either rider performance or level make-up. Hence the risk/reward which underpins the entire mode; Play it safe on an easy node, or push for a higher score on a much more dangerous one? Double down and go for the bonus objective or ignore it completely? Stay too long in one area to unlock extra Crew Members and risk riding in the dark of night? It can all feel a touch overwhelming at the start but soon enough a sort of rhythm to this loop emerges, aided by gameplay which encourages a flow state; Descenders, more than anything, wants players to simply be present and adjust to the course in front of them, not the course they wish they were on.

Aiding these concepts of calm and presence is a soundtrack composed entirely of liquid drum and bass tracks from specialist Dutch music label Liquicity, with curated playlists accompanying each terrain type. These serene and often instrumental pieces helped to enhance my feeling that, while Descenders outwardly appears to encourage ludicrous speeds and risky tricks, it really wants players to move at their own pace and not feel beholden to high scores and countdown timers. It’s a refreshing change compared to other entries I’ve played in and around the genre and one that ensures I’ll keep coming back to Descenders regularly for the foreseeable future. After all, a few more runs and I might just be able to make it through the forest completely unscathed.