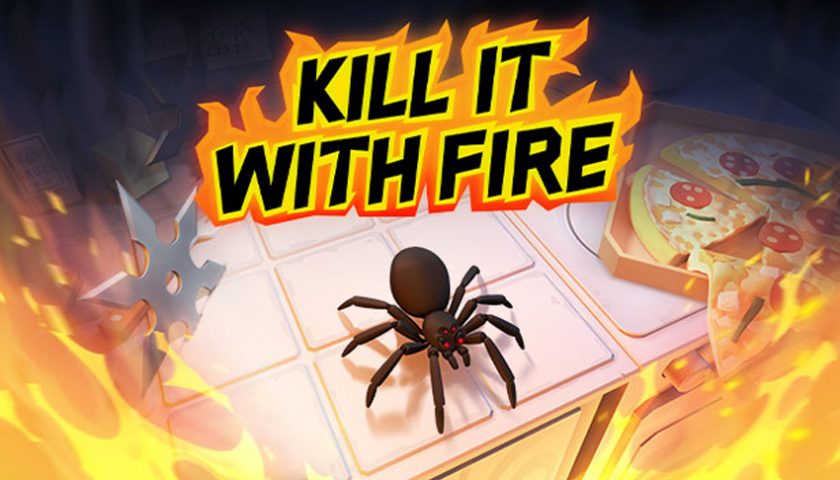 Kill It With Fire – Burning Down The House

Kill It With Fire might as well be called Digital Exposure Therapy for Arachnophobes, but I’m sure the former title does much better in terms of SEO. The first independent release from developer Casey Donnellan, formerly of Rooster Teeth Games, Kill It With Fire is a physics-based puzzler with a hefty dose of destructible objects, environments and a buttload of spiders to smoosh.

Armed with a trusty clipboard which doubles as an instrument of doom for any wandering arachnids, players explore a series of progressively larger levels whilst carrying out various tasks which are checked off said clipboard as they’re completed. Starting out small, goals such as ‘Kill 5 Jumping Spiders’ quickly give way to much more difficult goals like finding 10 items in a convenience store that will collectively total over $100. For those in a hurry, some of these goals are optional but are often designed to push players towards more interesting ways to uncover the eight-legged fiends lurking about. By completing every goal in a level, an ‘Arachno-Gauntlet’ is unlocked which works similarly to a Grand Theft Auto Rampage mission, requiring spiders be killed via a particular method within a set time limit. These can be quite difficult to achieve depending on how quickly spiders spawn and the weapon type required to complete it which can be frustrating, most notably when left hunting down a single spider or two with only a few seconds left on the clock.

There are eight different types of spiders, all of which behave differently – some will jump around, others obscure the player’s vision with webs or explode upon death. Blessed be our player character, however, who is impervious to spider attacks of any kind. To mitigate what would otherwise be an extremely easy title, Kill It With Fire ensures that these spiders are, on the whole, slippery little buggers who rarely stay still long enough to take a bullet, frying pan or throwing star to their hairy little faces. This is where the titular fire comes in, through the form of an improvised hairspray flamethrower, Molotov cocktails and eventually a flamethrower which not only spread flames throughout the environment but also lights up any spiders in the vicinity who, in their agony, further spread the blaze as they retreat. It’s fair to say Kill It With Fire is at its most chaotic when this happens and results in environments that wouldn’t look out of place in a Michael Bay action sequence.

Kill It With Fire clocks in at a few hours with some locked content hidden away for those who master its most demanding challenges. Scattered items throughout earlier levels hint at a larger overarching story that is only revealed in the final section and it’s very amusing to see the scale of the spider-killing be blown out to epic proportions by the end of this sequence. If you’ve got a rainy afternoon and not much to do, Kill It With Fire will slot in nicely for a few hours of entertainment, although there may not be a high degree of replayability if the combat system doesn’t suit your tastes.

Kill It With Fire was reviewed on PC with code kindly supplied by the publisher.