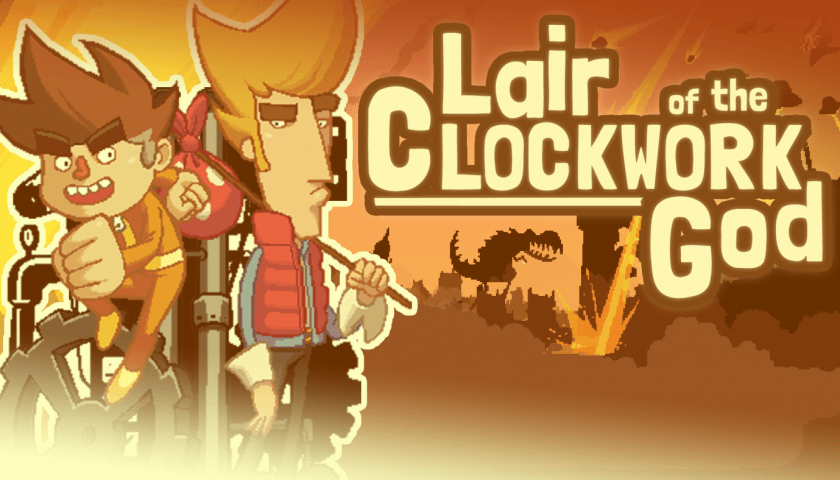 Previously only available on Steam, indie hybrid adventure Lair of the Clockwork God is now releasing on consoles, with a 4th September launch imminent for Nintendo Switch and Xbox, but a longer wait for PS4 players.

Featuring arguably one of the more unique concepts in recent history, Lair of the Clockwork God meshes point-and-click-adventure and platformer gameplay together in a lovingly irreverent take on both genres. Additionally, the two protagonists who represent each genre respectively, are fictionalised versions of developer Size Five Games’ Dan Marshall and Ben Ward, who gleefully take this piss out of one another at every opportunity.

Not taking things too seriously is a hallmark of Size Five Games, being behind Behold the Kickmen, a satirical take on soccer where ‘doing goals’ is the main objective.

Lair of the Clockwork God also boasts a rather unusual feat of a 99% positive Steam user rating. Seriously, who manages to get such a high user review score in the year of 2020? To be fair, one of those ratings is mine, as Lair of the Clockwork God is a bloody good game. Also worth reading is a gamesindustry.biz article about how much importance Marshall places on user reviews, serving as a reminder to leave reviews for the games you enjoy.

Everyone please marvel at my amazing Clockwork God promo shot which incredibly was NOT taken in the Peruvian jungle at great expense but was in fact actually taken by me, on my phone, lying on my tummy in the garden. https://t.co/JyNq1vtNlD

I played a chunk of the PC version earlier this year and can confirm the genre-bending antics are genius, while Lair of the Clockwork God’s writing is among the wittiest seen in gaming.

While the Xbox and Switch ports – handled by Ant Workshop – are out soon, the PS4 version will be later, due to ‘complicated and boring business reasons’ according to Marshall.

The Playstation version of Clockwork God EXISTS and as far as I'm aware is DONE.

I'm not entirely sure of details but due to complicated and boring business reasons, it's a little behind.

Should hopefully release in 2020, still. https://t.co/OSuGsEAOXb