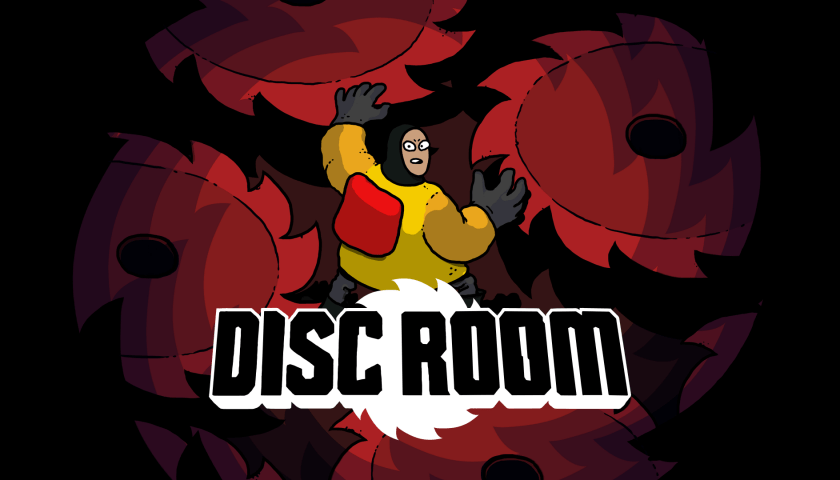 Disc Room is one I hadn’t been following closely – so being given this to review was a very nice surprise indeed. Especially as it’s been developed by the team behind the rather inventive Minit. It takes place in 2089 where a gigantic disc has appeared around Jupiter. You’re a scientist who goes on board to explore, which is where things start to seriously get strange…

At its heart, Disc Room is about dodging discs whilst trying surviving as long as possible. Mostly. There’s also a large element of disc-induced death involved as well, which is kind of important to make progress in your explorations.

You might be thinking to yourself just how a game with a concept like that can have any real depth. But once you go underneath the surface, you’ll be just as surprised as I was, because as cliched as it sounds, there is more than meets the eye to this one.

Each room offers a number of exits to other rooms and to open each, you’ll need to perform various tasks. Some, like surviving in a room for a given amount of time are straightforward enough to accomplish. But for others, things do get inventive. There’ll be objectives which can’t be met just by surviving a given room. Whether focused on surviving a total amount of time across a grouping of rooms, or one focused on having you die by various numbers of disc types, there are many unique and exciting objectives to discover on your explorations,

You’re not entirely helpless though. Your scientist isn’t armed, something I found to be a breath of fresh air, but you will unlock abilities as you progress. Some feel familiar, like being able to dash about the screen. Others are more inventive, like absorbing any disc flying about the screen.

More than anything, this is what I love about Disc Room – it takes a small set of mechanics, and mixes them up in various ways resulting in some wildly creative challenges to play through. I found whilst it’s opening felt relaxed, it wasn’t long until the challenge started ramping up, with the number of discs on screen making things feel like disc hell.

Whilst the story isn’t the deepest of tales out there, the way in which it’s delivered really stood out to me. It’s done with an animated comic style, with new sequences presented as you reach various parts of the game. Though such a story isn’t truly needed, I genuinely appreciate the effort put into both the presentation and execution of these sequences. They more than piqued my interest in wanting to explore further and further into this dastardly dangerous disc.

Along with that, I really dig the game’s art style. The comic-esque tone from the cutscenes is carried over, making it feel quite different compared to many other games seen in 2020. Each region of the Disc offers some themed visual design as well, both in the Rooms, and the Discs themselves. It contributes neatly to giving you a reason to explore, and die to as many different discs as possible. For science of course!

The visuals are complemented by the exciting soundtrack by doseone. It offers unique pieces for each of the rooms, alongside a genuinely dark tone to its compositions. They work wonders in helping to convey that atmosphere of being trapped in a hostile place with the threat of death at every turn.

At this point, I’m sure you’re thinking “Disc Room sounds like a rather neat game, but maybe it’s a bit too much for me?”. If you are, then do I have great news for you! Disc Room offers comprehensive accessibility options, letting you tailor the game to provide whatever level of challenge you most desire. Whether you just want to slow the game down, add indicators to telegraph the intended direction of spawning disks, or simply relax the goal conditions… it’s a game which has your back. Something which goes an incredibly long way to making it approachable for folks who may not be up to the challenge offered with its default difficulty levels.

When it comes down to it, Disc Room might not sound like the most exhilarating title of 2020, but underneath its surface, there is some honest to goodness depth here. In many ways, its mechanics remind me of some of the more eccentric concepts which appeared in the 8-bit era. Though it may offer that eccentricity, it thankfully does it without the punishing difficulty or obtuseness which games of that era could be known for. The way in which it uses a fairly simple set of mechanics and rules to craft some devious rooms to negotiate is genuinely quite refreshing. Which when combined with a nice brief runtime, is a game which certainly doesn’t overstay its welcome, and certainly is well worth taking the time to check out.