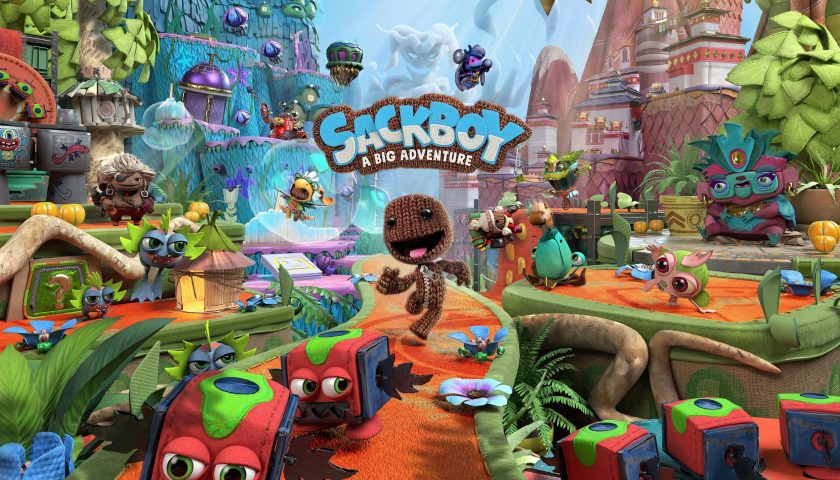 Sackboy: A Big Adventure – Stitching Together A New Future

In the years following the 2014 launch of LittleBigPlanet 3, things weren’t looking overly rosey for the franchise, or its hessian hero Sackboy. The ‘Play, Create, Share’ craze had simmered down, and even the stewards of the franchise, Media Molecule were seemingly struggling with their own work, 2020’s Dreams (as it is it came together wonderfully well). Development on LittleBigPlanet 3 was picked up by Sumo Digital, but, despite the gorgeous look and rock-solid gameplay, LBP 3 was rightly criticised for bringing nothing new to the established formula. Sackboy’s future looked in jeopardy, but time brings fresh ideas and new approaches. 2020, and the launch of the PS5 has brought forth a new take on Sackboy’s adventures, and it’s this fresh perspective that sets up a future that looks quite bright indeed.

Forgoing the ‘Play, Create, Share’ model, in favour of simply ‘Play’, Sackboy: A Big Adventure is a 3D platformer akin to the Super Mario 3D classics, though featuring a clearly defined LBP feel. The evil Vex, an entity made of fear and chaos, kidnaps Sackboy’s friends, forcing them to building his dastardly Topsy Turver, a device capable of transforming the lovable world of imagination and happiness into a world stricken by nightmares – a most undesirable outcome indeed! That leaves things to Sackboy, the sole escapee from Vex’s attack to restore order and shut down the terrible Topsy Turver. Like LittleBigPlanet titles before it, the story is wafer-thin, but it is delivered with heart and is paired with lovable secondary and tertiary characters that inject some spark and humour into the narrative. It’s all you can ask for from a family-friendly platformer.

The core element of the game is of course the aforementioned platforming, and this is where Sackboy shines, especially in comparison to its parent titles in the LittleBigPlanet franchise. LBP titles were regularly critiqued for their especially floaty feeling that made platforming more challenging, and less satisfying than it needed to be. In the case of Sackboy: A Big Adventure, that has been tightened somewhat, straddling the line between the pinpoint, reliable leaps of a Mario game, and the sometimes weightless feeling of LittleBigPlanet. The relative lack of precision may still be a point of contention for some, but this is the best that a Sackboy adventure has felt to play so far. The game compares with Mario 3D World quite favourably in a few aspects, but in this one area, it does fall a little short.

When paired with the excellent level design you’re looking at a platformer that really impresses. Across five core worlds (there are a couple of bonuses along the way) and 10+ hours, with more for those looking to 100% levels, the world design continues to hold, regularly introducing new tools for Sackboy’s kitbag, or reintroducing them with new twists. At no point does the action grow stale, even in the end-game state where you’re clawing in collectables and repeating levels in the hopes of pushing through without dying, a real feather in the cap of Sumo Digital. Co-op play is also a key feature of the playing experience. You can partner up with a friend in couch co-op (and eventually online) play, for a wonderful collaborative time. Aside from a few dedicated multiplayer levels which necessitate the presence of a friend, the core levels, which are first and foremost designed for solo play, arguably feel even better to play with a partner. There are also a number of levels that feature branching paths, and if you’re looking to be a little more time-efficient, then splitting up and reconvening later will be an attractive prospect for you.

Being a launch title for the PS5, that particular SKU utilises many of the marketable aspects of the DualSense controller, from the haptic feedback in the controller and triggers, which while subtle, is still additive to the experience, the gyroscopic controls play a part in certain platforming sections but otherwise, it’s traditional controls otherwise. Also being a launch title for the PS5, the game looks especially sharp on that platform, as opposed to its older sibling. The cutscenes look especially stunning, as individual strands of material weave through each other, and stray pieces stick out, while gravity does its thing, all as they should. The characters themselves are stunningly designed and wonderfully realised, while a large part of Sackboy’s charm comes from it’s musical accompaniments. As well as featuring it’s own original soundtrack, the game also includes a number of licensed tracks, some simply serving as background music, and others that actually dictate the momentum of levels. From Brittney Spears’ ‘Toxic’, to David Bowie’s ‘Let’s Dance’, and Mark Ronson X Bruno Mars’ ‘Uptown Funk’, each of these themed levels play similarly to noted levels in Rayman Legends, but have that LBP flavour added to them to wonderful effect.

Sackboy: A Big Adventure, is a big step in a fresh direction for the overall franchise. Leaving the tried and true ‘Play, Create, Share’ model behind is a gutsy move from Sumo Digital, but is one that greatly benefits the final product, with each level clearly benefiting from the extra TLC that comes from not dedicating time to an all-consuming creation mode. Sure, the platforming is still not as precise as you may want it to be, but there’s an undeniable, irresistible charm that the game boasts that few other franchises can leverage, and it’s perhaps on show more in Sackboy’s latest than any previous work. Sackboy’s adventuring days are alive and well once again.

Sackboy: A Big Adventure was reviewed on PlayStation 5 with code kindly supplied by Playstation Australia.