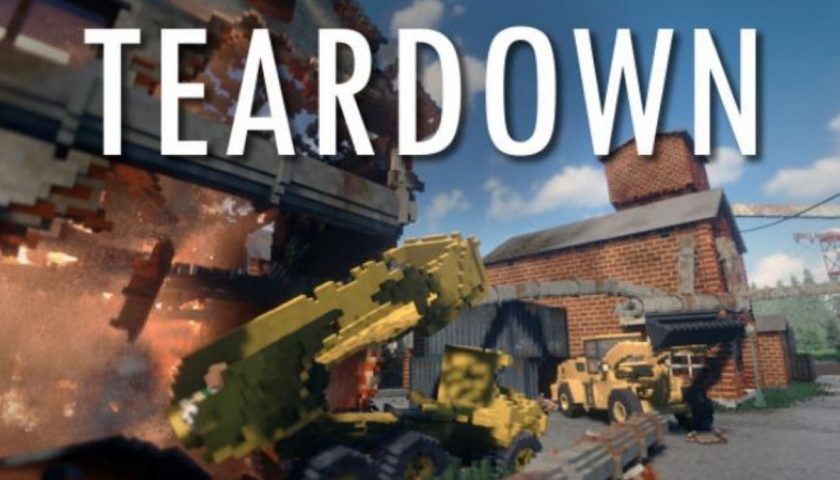 Voxels are cool. That is just an unassailable fact, and every scene of volume elements carries a special feel to it, invoking the atmosphere with simplicity, yet embodying the playfulness of pixel art. Often accompanied by depth of field effects in mimicry of tilt-shift photography, these lovely boxy dioramas straddle the line between retro and modern.

A few years ago, a video of a voxel environment captured the imagination of many, as it showed the world collapsing as it was damaged, with an additionally intriguing premise of a heist. It seemed to disappear in the ensuing maelstrom of whatever the past year had been, and was all but forgotten.

Late into the hours of the 29th of October 2020, a tweet shot out into the silence of the night with news that Teardown was now available through Early Access on Steam. Seconds later, it was downloading.

In a year where every vestige of the ordinary had disappeared, including the way we mark the transitions of week to week and month to month, news of the release came as a welcome surprise. Much like the joy of a chocolate bar in a Christmas stocking — and you know that season is on its way that feels positively archaic, yet even Burtonesque in this nightmare of a year — there was Teardown. It wasn’t on a list.

Yet if there was a game made to encompass persisting through 2020, it is this. Sure, the early months of lockdown and a new surreal way of existing required the escapism of an idyllic, unspoiled island by way of Animal Crossing: New Horizons, but as those hours gave way to an emptiness, the dream stayed dreamlike and provided no long-lasting respite from this jittered existence.

Teardown may not deliver an escape, but it’s extremely cathartic to take a sledgehammer to a wall, and have it crumble with every smash. It’s also tremendously satisfying to cut through metal with a blowtorch and have it fall away in one neat piece. Every disconnected piece reacts to the physics system.

The voxel style is more than just an aesthetic, and its design subsumes the concept of its reality being made from those elements and treats them as the building blocks of the universe, subject to the same forces and limits as their real-world counterparts. Cut or break the supports of a structure, and it comes toppling down. Crash a vehicle into a wall, and if you’re fast enough, it will buckle.

Rather than just a sandbox of destruction, Teardown has a campaign where you conduct a series of demolitions and heists. A number of the missions have alarms rigged to objectives, which start a sixty-second countdown to escape with all objectives complete. A huge part of the campaign then is strategically demolishing a path through the area so you can make it out on time. You do also have the ability to save the game as you go, meaning if you’re not 100% sure you can execute your plan in time, you can make an attempt and load if it all goes to pieces. Appropriately heisty music accompanies the campaign levels, but there is at least a mix between missions with a rapid escape requirement, and a nice sauntered smash fest.

As an early access game, it’s expected there will be more to come to Teardown over its journey to a full-fledged release, with mention of modding tools and a more adept creator mode, but even in its current state, the game feels like the exhalation we’ve all been yearning for.