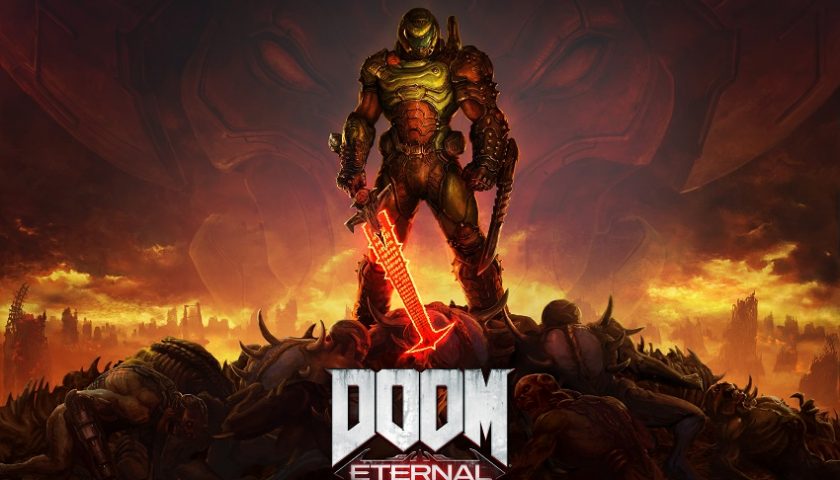 Of all the games released in this year, the one most suited for venting out one’s feeling would easily have to be Doom Eternal. And if there was an opportunity to take it with you on the go? You would think it would be a pretty neat deal? Right? It’s certainly what I thought as I started up this Switch conversion of it for the first time, and after so many months from its original release, it’s time to find out if it lives up to the versions on more powerful platforms.

My first impressions were positive – the team at Panic Button have applied some serious optimisation know-how to get it running incredibly well. Whether docked, or in handheld mode it was smooth, and whatever visual trade-offs were made? I found they didn’t impact the clarity or general enjoyment of the experience. Which is a great way to kick things off. But then there was a big thing for me. Sadly a common thing which many ports to the Switch suffer from.

Once again, the UI is brought over without any changes. Which sounds more than reasonable, but if you’re playing handheld, you’ll find whilst most if it is fine, sadly the tutorial texts are anything but. With so many shown in the early game (starting with weapon use and covering the game’s mechanics), finding out which button is used to dismiss them gets annoying fast. Not just because each type of tutorial relies on a different button to dismiss it. It was at that point I more or less gave up playing in handheld. When docked, the UI is far more readable and less likely to cause me to go crosseyed.

As for the gameplay itself?

It’s here. All of it. Ripping. Tearing. Platforming. Though not as silky smooth compared to other platforms, the challenge on offer is very much intact here. Sadly, I felt the full-on nature of things got overwhelming for me after a while.

I appreciate the overall encounter structure – levels are broken up into encounters staged in various arenas. The challenge of using the environment to be on the move, whilst prioritising which demons should be taken out first to manage things feels great. Where things got overwhelming for me was from a number of places. The first being the combination of gamepad aiming, and hitboxes for the weak points of certain enemies. Trying to dial in your shot is hard enough in slower-paced games with the Switch’s controllers (both regular Joy-Cons and the Pro Controller), but doing it under pressure didn’t help at all.

Though I normally don’t go down that path, the Motion Controls helped somewhat, giving me a bit control for lining up with said weak spots. Though I’d still say PC players using Mouse & Keyboard will have a far better time of course!

Then there’s the resource management. It’s not just health which is recovered from specific attacks, but ammo and armour as well. While the flame attack (to earn armour) is straightforward enough, the Chainsaw attack (to gain ammo) is a tad more complicated. With things like the slower recharge rate for its fuel. Sure, other attacks have similar cool-downs, but I found it much more noticeable here, tripping me up on quite a few occasions when I really needed more ammo.

Having to shift that focus from fighting enemies to purely defeat them, to fighting them to harvest resources was a conscious shift which pulled me out of the flow, as those actions don’t quite feel as instinctive to me as you’d expect. Especially compared to being 100% in the flow working your way through enemies and getting through an encounter by the skin of your teeth.

The conscious shifts in focus made me feel like I was tied to a bungee cord. Granted, it’s part of the challenge – one which Doom Eternal really makes you fight for, but it can be draining and made me need to put the controller down after shorter sessions.

The Switch version of Doom Eternal is ultimately a complex beast to recommend. If you’re someone wanting to take on some demons on the go? The lack of an adaptable UI makes it tough to recommend based on the amount of text which is unreadable when in handheld mode. For those players who primarily play Docked, especially if the Switch is one’s primary system? It makes for a far better prospect. The changes made to the visuals result in great performance despite the limited horsepower, but most importantly: all the mechanics are intact. At least if you don’t get overwhelmed by it all as I did in my time with it.