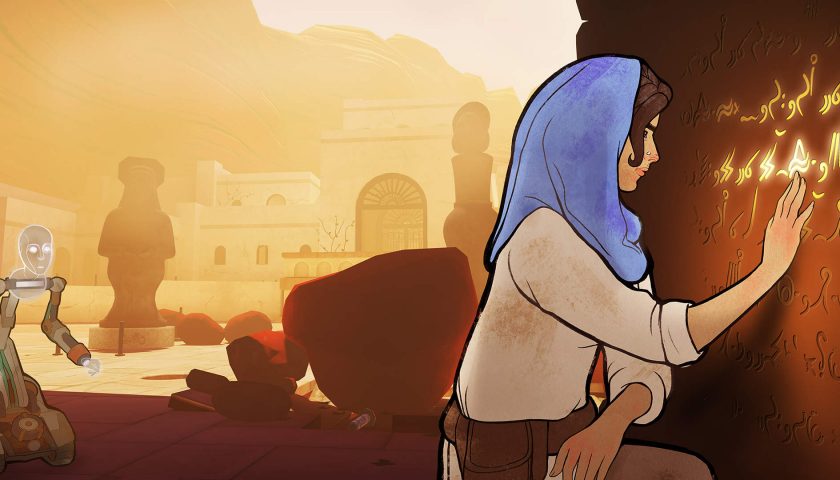 Heaven’s Vault – The Joy of Discovery

What is history, really?

Does history even matter?

Protagonist Aliya, forever in search of truth and knowledge of the past, is an archaeologist by trade. With an initial nudge out into the nebula in search of a missing person, you are unleashed upon a sci-fi journey of profound discovery, with abundant secrets to uncover and philosophical questions to ponder.

Through your adventure exploring a fantastical cosmos of inhabited and uninhabited chunks of rock connected via a complex network of space rivers, you’ll be spending your time split between a) conversing back and forth with a host of memorable characters, not least of which your patronising robot companion, b) uncovering ancient objects and deciphering an entire ancient language through oodles of inscriptions, and c) walking/sailing between A and B.

Developer Inkle has already proven their storytelling acumen to be exceptional through the underappreciated 80 Days, but here that writing is taken up yet another level. Heaven’s Vault absolutely shines in its characters and narrative, with strong connections and curiosity bound to nab you from the outset. Every conversation, every morsel of information from a new item had me begging for more.

The parts in between then are… fine? Walking around spaces and sailing along rivers are, for all intents and purposes, simply functional. Particularly when sailing great distances between cities and dig sites, things can start to feel like they are dragging. This is driven solely by how fantastic the discovery portion of the game – I just want to see and learn more! Thankfully, a kind of fast travel system exists for places you’ve already visited, which cuts this down a decent amount.

As an adventurer, Aliya is intent upon not only discovering the existence of places people haven’t set foot on in hundreds or even thousands of years but also why they exist in the first place. She is part of a pre-industrial civilisation living amongst – and making use of – history and technology of times long forgotten. For most, getting by with life as-is is enough. For Aliya, curiosity and the need to understand drive her to question – and to seek answers.

The linchpin of your journey is centred around the aforementioned deciphering of an ancient language. it might sound dry at first blush, but it’s an incredibly compelling loop: discover an artefact inscribed with a phrase of some kind, use the handful of words you already know to compare and contrast sections of the phrase, then build upon your knowledge by deciphering the context and reason around why this artefact is inscribed this way. Every discovery, massive or insignificant, feeds back into a larger understanding of the language and history to be uncovered.

Heaven’s Vault does an excellent job of allowing you to approach this discovery in any order you like. Much like the real world, proof of history exists everywhere – it’s up to you to find it, learn from it, and understand it for yourself. Heaven’s Vault very much has a beginning and an end that are set in stone, but the middle? Well, that’s a story for you to learn, interpret, and understand for yourself.

On a broader scale, the way in which Heaven’s Vault goes about having Aliya uncover history is endlessly fascinating. Other games focused on Archaeological discovery are often built as a zero-sum game. You begin with no knowledge, you gain knowledge throughout a game, and by the end, you have a full comprehension of everything you need to know.

Through the use of language in Heaven’s Vault, you can only ever extrapolate knowledge of the past. The entirety of history exists, ready for you to find – but you can only ever infer what that history is. Knowledge isn’t simply granted to you because you find it. You have to view it through the lens of your own understanding first.

This has led to an interesting phenomena around the game: rather than having unravelled everything the game has to offer and “solving” the game, these more dedicated players have simply come to their own conclusions of what they think is truth. In an interview with Polygon around the game’s PC release, narrative director and writer on Heaven’s Vault Jon Ingold noted that “it’s been very cool watching the community on our discord channel pooling this stuff and coming towards an Agreed Truth”.

Even with inscriptions explicitly stating what an artefact is or what it is used for, Aliya – and in turn, the player – can only ever understand that description from within our collective contexts. There is no exact truth to be had – only a belief, based on the information we have available.

History is malleable, a thing we can only ever guess at. Proof, evidence, even the most factual and extensive documentation of events is both recorded by and gleaned from fallible people with their own perspectives of the world. If the past few years have taught us anything, it’s that people’s interpretation of anything and everything can differ drastically, even when viewed through the exact same lens.

What we understand as our collective history is a combination of decisions and actions made by those past, along with interpretations of those present.

It’s ok to be confident in your own knowledge of what truth is – but it is folly to be certain. To believe you know exactly what is universal truth is to shut yourself off from what’s possible.

Heaven’s Vault makes the case that history is important to learn from – and more importantly, our understanding of current context is forever changing. There is no such thing as truly understanding everything as it’s ever existed. Learn, grow, then learn again. That is the great loop of existence.