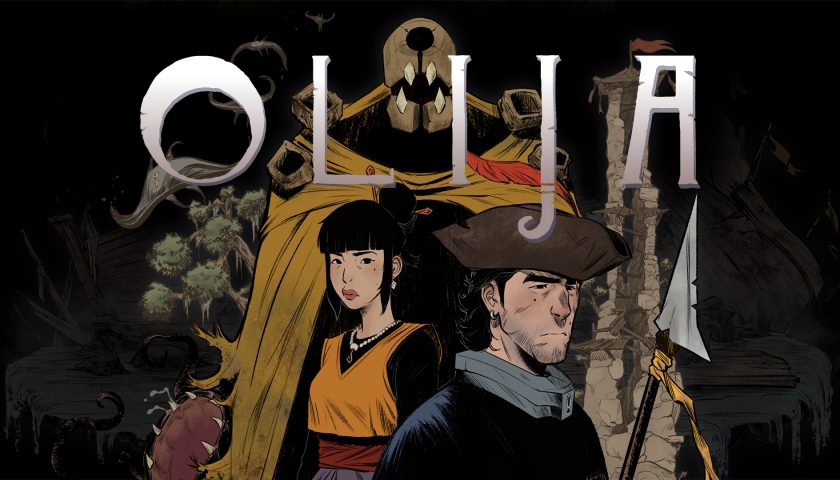 When it comes to reviewing games, one could make a good argument that having less information and lead up could actually be a good thing. The logic behind this statement is that by removing any / all preconceptions in one’s mind also removes all expectations that one would then articulate the game fell short of or even exceeded, both of which could potentially impact a reviewer’s critique and analysis. Olija feels like one of those unique games that benefited from experiencing the entire playthrough, fresh and untainted.

You play as Lord Faraday, seeking better fortune on the open sea, he and his crew are struck down in a massive storm. Ship destroyed and left to die in the dark lonely ocean, Faraday instead finds himself in a strange new land full of mystery, intrigue and danger. His goal is to now reunite with his surviving crew and return them and himself home safely once more. As one could gather from this introduction, Olija is a narrative-driven, single-player experience that continuously unfolds and changes as you progress further in the story.

The games core gameplay is a very typical 2D platformer with puzzle elements and bad guys to kill. You are required to navigate the different levels through an open map (one that reveals new areas the more you complete) but for the most part, the game is directing you where to go and often feels like it’s mostly on rails. A clear benefit by doing this is that the player is never left in limbo, wondering where to go or if you’ve got all the correct items. The obvious downside is that you’re never given much freedom of choice, it’s either doing it the correct way or the wrong way. There are also some minor crafting elements where you can make special hats that give Lord Faraday perks and buffs, for example, one that gives you a life steal buff for defeating enemies. It’s not amazing but it can really benefit your preferred method for combat and it’s a nice addition.

The puzzle elements in Olija seem to exist, less to truly challenge you and more to slow your pace down. Some with a get a little head scratch but nothing most gamers would truly struggle with to the point of turning to the Google hive mind for answers. Combat on the other hand is a slightly mixed bag. You end up with a number of weapons that you can switch between at any given time, all of which will change the way you attack and defeat enemies. However, the combat itself, never felt like it had a lot of depth to it. Olija is a far cry from just being a button masher, you’ll need to actually give some thought to timing, movement and special attacks, but not enough where you struggle if you’re just on autopilot. Olija somehow falls in the middle of either end of the spectrum here, as an example, you’re given a dodge roll from the moment the game starts, but during the entire playthrough, we never felt that this was required to defeat any bad guys and instead was used when travelling on the boat to smack Lord Faraday against an invisible wall just to make the loud *thud* sound as he collapsed on the ground (it made us laugh, give it a go!).

So far one might assume that this game falls into the ‘good but not great’ category, but one would be wrong for thinking this. The gameplay, whilst never truly offering a big challenge, was always enjoyable and the reason for this is that the developer’s vision of keeping things fresh the entire playthrough. Every stage, every reveal, never outgrew its welcome and there were many little things that continuously changed to keep things fresh for the entire playthrough. At no point did we feel the rinse and repeat gameplay trap that so many games fall into to pad out their run time, Olija just kept us wanting more and quickly became a game that was hard to put down. As a side note, for the older gamers out there, Olija also gave us a very strong Prince of Persia vibe. Certain music notes here, little nods there, on purpose or not, it was something that tickled our nostalgic bones and we felt there was definitely some inspiration there, whilst still offering a completely new experience. The only true downside of Olija is that the entire game could be beaten in under six hours and we didn’t feel there was any real incentive to replay it again. If one could sit back and honestly be happy with a six-hour experience with beautiful voice acting and music, non-frustrating gameplay, and most importantly, is fun from start to finish, then Olija definitely a game you want to check out and one we can easily recommend.