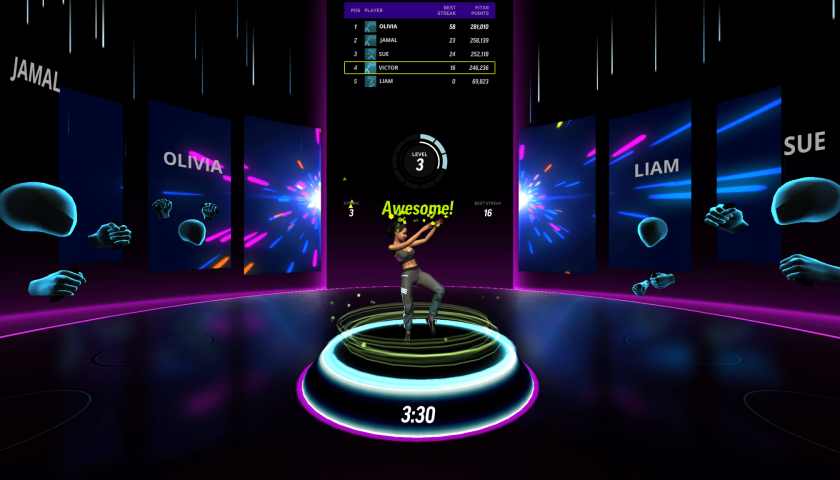 Ok, I am two weeks down into this challenge and despite some hurdles and pitfalls, I am still doing rather well. Last week was an odd one, one that started well but in the middle turned into a stomach bug that had me doing the quickstep to the loo every 10 minutes. This meant I was totally unable to do any form of workout on Wed, it just wouldn’t have been possible. To finish the week we went camping from Friday to Sunday. This was also problematic because even though I took my Oculus Quest 2 with me, it didn’t like the uneven light of the campground making using it impossible. So instead of VR workouts, I spent a lot of time doing physical things like swimming, riding and walking, more than making up my 30 minutes of exercise each day. During the week, however, I did discover that the Quest will work under my backyard pergola, as long as the sun isn’t shining in, which is nice because it means I can get outside, punch the air like a madman and scare the dogs in the process.

Who says you can’t enjoy the outdoors when doing your VR workout. #VRvsFat pic.twitter.com/tO2ok0mPXt

So with the challenges of the week, I was somewhat surprised by my continued good results. There are some odd measurements with my Thigh and Bicep but I am just putting that down to human error and the difficulty of measuring one’s own appendages. The fact that both my chest and the large Uluru shaped area I call my stomach have both dropped in cms actually gives me a bigger smile than the weight loss. This week I could wear a belt that just wouldn’t fit three weeks ago and even though it is only fitting on the last hole, that has given me the little boost I need to keep on keeping on.

As for which apps I have been using, in this disrupted week it has mainly been FitXR, due to the fact I can play it wirelessly on the Quest 2. I did get a session of PowerBeats VR in and now that I have bumped the difficulty level up I am finding it much more of a workout. Finally, I found a new game called AudioTrip which is fantastic. Similar in style to SynthRiders, AudioTrip really gets you moving to the music and waving your arms around like crazy. The fact it can get an unco lout like me moving in some sort of rhythmic nature is testament to how well it does its job of both entertaining and encouraging exercise. I have found it makes the perfect way to loosen up my muscles after my main workout is complete and will be using it fairly often I expect.

As for next week, well hopefully this can be a week of serious effort without distractions like camping and 40th birthdays to challenge my results. I have nothing planned so it should be seven days of healthy eating and solid exercise. If I can manage that I am really looking forward to my results next week.

Don’t forget about our Zero Latency VR competition where you can win a double pass to their newest location in Sydney!