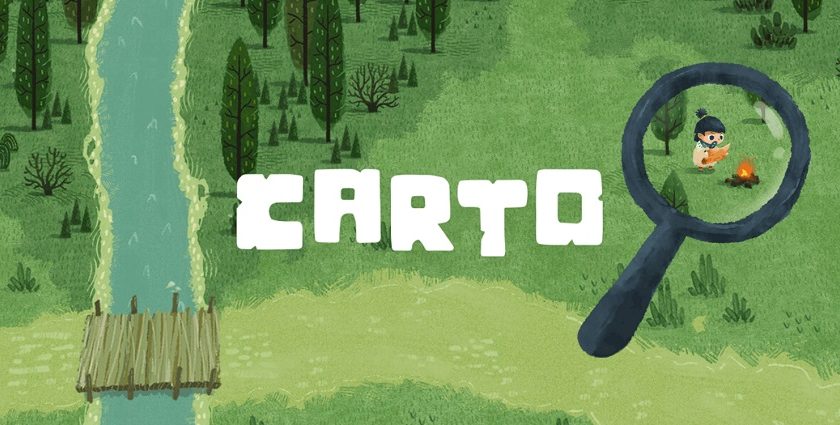 Playing through Carto is just nice, you know? It’s a wholesome game in a lot of ways, but not in the sickly sweet or deliberately exploitative kind of way. It’s just a cute, light story with extremely low stakes, giving you a small thread to pull as you work your way through some unique and delightful puzzles. Sound good? Yeah, it really is.

Without much fuss, titular character Carto finds herself set upon a world made up of relatively small square tiles. These tiles can be accessed from your map screen, where they can be moved around and rotated every which way to your heart’s content, creating your own path through the world, as long as squares line up correctly at their edges. Think Dominoes, but instead of matching numbers of dots, you’re lining up similar terrain, paths and rivers.

This mechanic is used in cool and delightful ways across Carto’s 6-8 hour journey, broken up into 10 bite-sized chapters. Early on you’ll be moving pieces around to help guide sheep back to a young shepherd; later you’ll be exploring a dense forest, led only by sound cues and environmental hints.

In matching with the chill theme, the puzzles aren’t ever overly obtuse and the difficulty ramp throughout the game is gentle. There were a few times I did have to sit there and work my brain into figuring out how I was meant to approach a given situation, but only ever in a pleasing way, never a frustrating one. The way the levels are broken up into manageable chunks really helps keep everything contained enough to never have you reaching for obtuse solutions – the key to keeping any real potential hardship at bay.

Throughout Carto’s travels, you will come across a vast array of simple but colourful characters, all bursting with personality. There’s never any real conflict between people – everyone is just generally good-natured and helpful if a little zany. It’s quite a breath of fresh air amidst both popular media and the world itself constantly clashing everywhere you look.

All of the characters are wonderful in their own quirky ways, but an easy favourite would be the denizens of the volcano. The writers clearly had a blast coming up with some great setups and punchlines. Jokes here are on point – it’s testament to the excellent writing that the hardest part of writing this piece was choosing the next screenshot.

Set up for Carto is kept mostly to a minimum, giving you a simple explanation for exactly why you are a little girl wandering around a world you are able to shape at your will. Young Carto messed with her Grandma’s map, creating an instant storm that sends pieces of the map – along with Carto herself – careening out the windows of their airship and out into the world below. It’s not necessarily expected or needed, but between this simple premise and wandering around the island of the first chapter, it really sets the tone for the rest of your journey.

This table setting puts you in a relaxed and feel-good mood, priming you perfectly for some genuinely good humour and heartwarming moments. I’d place it somewhere between dad joke and quirk, creating a loveable atmosphere that’s just pleasant to be in. Without such a chill vibe it just wouldn’t work, but here I found myself smiling and outwardly laughing quite regularly. It’s just, I don’t know – quite lovely? To be spending time around and with kind people who care for others? Who’d have thought?

One of the best parts about Xbox Gamepass isn’t the hundred-hour RPGs or the explosive blockbuster action games (although those are certainly nice too!) but instead, it’s the cool little games that fly under everyone’s radar. Carto is available across a variety of platforms, but I wouldn’t have even noticed this little gem if it wasn’t for Gamepass. So, kudos Microsoft. Keep bringing home the bacon.

More importantly though, kudos to developer Sunhead Games for coming up with a really cool puzzle mechanic, then building a sweet, low impact game with a delightful art style and a genuinely heartwarming world around it. If you’re looking for a chill puzzle game to sit with for a short while, Carto isn’t one to miss.

Carto was reviewed on Xbox One through the author’s personal Gamepass subscription.