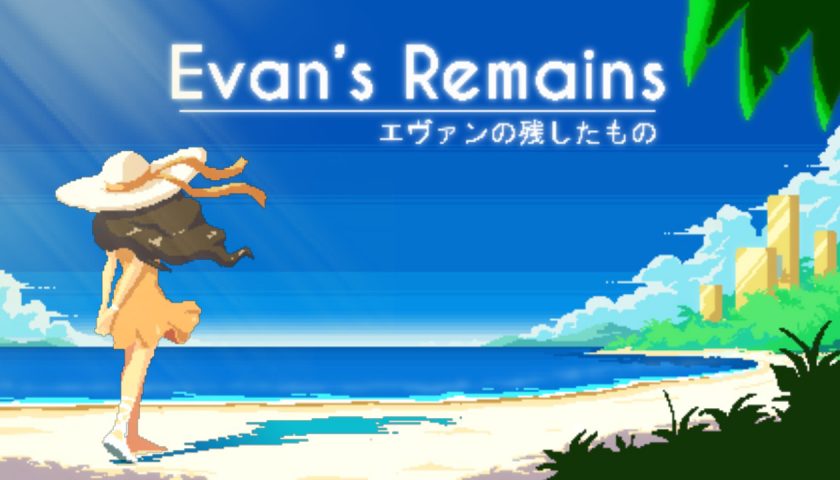 Evan’s Remains is a ride. In much the same way as a good mystery film, this game’s 2-3 hours of plot twists and emotional moments will have you questioning and re-evaluating your knowledge at every turn. Unlike a good thriller, however, Evan’s Remains has you questioning both the story being presented and how story structures we consistently consume manipulate their audience into having capital F Feelings.

Pulling on relatively basic 2D puzzle platformer fare, Evan’s Remains doesn’t veer astray from its many mechanical inspirations. From beginning to end, you’ll walk to the right, encounter a discrete platforming puzzle or two, then experience a chunk of dialogue. Rinse and repeat.

This structure serves a couple of purposes. For one, the puzzles are built into the story insofar as giving you an almost tongue in cheek reason to actually complete them. Two, they serve as buffers between narrative questions and reveals, giving your brain time to ponder the emotional implications of the last flashback or discussion piece while you engage with the puzzle logic in front of you. Rather than stretch a story out that could be told through a deluge of cutscenes, you get the chance to process the last twist or turn the story has taken, before the next one comes along and flips everything you thought you knew upside-down.

If I told you the conclusion of this story now, it would make no sense whatsoever. Yet despite such a short playtime, the line between where you start and where you end up feels gentle and digestible – and importantly, impactful.

Beginning as a simple search and rescue mission, playable character Dysis arrives on a deserted island after receiving a letter from the titular Evan for her, and only her, to come and find him. Questions are immediately raised. Within the first 20 minutes, I was hooked, that familiar pull of “I have to know” guiding me through the entire game in almost a single sitting. It definitely helps that the pixel art is just gorgeous, and the sound design is on point.

This tale weaves through an emotional rollercoaster, pulling on heartstrings while giving you a reason to pause and philosophically contemplate some of life’s biggest questions. I never thought I would be pondering the morality of truth in the face of death thanks to a small, inexpensive 2D puzzle platformer, but here we are.

Where the game leaves you in a relatively good place, all things considered, Evan’s Remains posits another question worth considering. Underneath this quite sweet and often beautiful game lies a somewhat ambiguous undertone about the creation of media intended upon evoking particular emotions in their audience. It’s only really one small facet of the twists toward the end and is secondary to the main point Evan’s Remains is trying to make, but I can’t shake the shivers it sent down my spine.

We turn to our media for a lot of things – escapism, emotion, knowledge. Ask anyone what their favourite TV show, movie, book or game is and why, and the answer will, almost every time, be something that emotionally resonated with them at the fundamental core of who they are as a person.

At some level, we understand that every good, emotional, fictional story is somewhat created to manipulate us. Our understanding of genre tropes, camera angles, plot structures and more, consciously or unconsciously, feeds into the emotional response we receive from consuming a given story. Stories might use particularly moody music to convey a certain emotion of the main character, or a loss of someone close is used in service of building a strong emotional attachment to the hero. These are things we see time and time again, and they work on us every time. We know this, and we accept it.

This little puzzle platformer game has a genuinely heartfelt story of human compassion at its foundation. Yet it unexpectedly had me examining the cynical nature of the social contract we nonchalantly sign with the creators of the stories we consume on a daily basis, several days after playing.

Even with all the beans I’ve kind of spilled here, is Evan’s Remains worth playing? The answer to that question is a resounding yes. The mystery at the core of this tale is an emotional and intriguing rollercoaster that will have you guessing right up until the very end. Even with such fantastical ideas and unending twists, the game still remains grounded and coherent all the way through. It’s a beautiful story worth experiencing in and of itself, and, if you’re anything like me, may just leave you ruminating on much more than you bargained for.