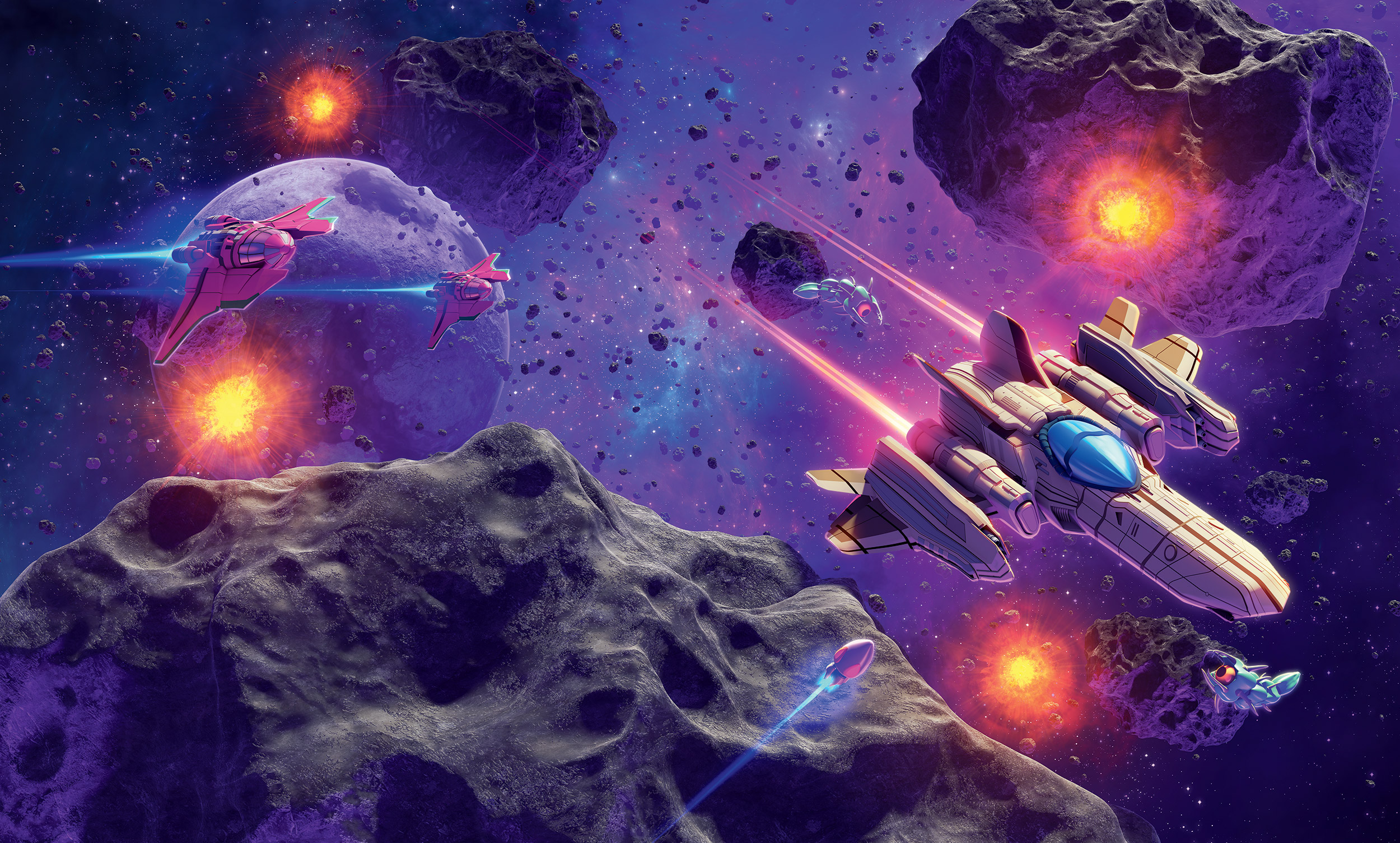 The original Habroxia shot for the furthest reaches of space, but really only just managed to pierce our stratosphere when it launched in 2019. Flash forward to 2021 and Lillymo games have returned for a second crack at the space-faring SHMUP, in the form of Habroxia 2. Where the original was considered bland, and light on for content, Habroxia 2 aims to up the challenge, diversify the playing experience, and add to the playtime. Can Habroxia 2 reach the heights that the original shot for? Or will it explode in flames on the way up?

Habroxia 2 tells the tale of Sabrina, and her journey to find her missing father, lost in the furthest corners of space. He goes missing while out scouting what remains from an old human war against another space-bound alien race, and his disappearance is what prompts Sabrina to jump into her own ship, one that her father had previously taught her how to use, to investigate and hopefully bring him home. The narrative bookends the experience and doesn’t intrude on the core gameplay experience but while very simple at face value, there’s an attachment you begin to make with Sabrina through your playtime, making the impact at the end of your journey hit a little harder than you’d expect from an experience such as this. It is, however, not the main attraction, such a title is saved exclusively for the gameplay experience.

The DNA of the original Habroxia is well and truly on show in this sequel, many standard enemy and boss designs return, though a few inclusions have made the cut, and a selection of existing enemy types have been tweaked to change things up. As well as the obvious fact that using the exact same enemies, pixel for pixel would make the title feel immediately stale, these changes and inclusions are necessary because of the change to the moment-to-moment gameplay experience. Habroxia 2 leans heavily upon the side-scrolling SHMUP elements of the original title, but also leverages twin-stick shooting systems to up the difficulty, and to present new scenarios for the player to contend with. On top of this, the ship handling has improved astronomically, so you’ll regularly find yourself moving one way, shooting another, suddenly banking hard to avoid incoming shots, and scouting for power-ups to improve your combat effectiveness.

The game will feel brutal at first, as the in-game currency system takes a while to get cracking. Credits are discovered and earned through your exploits in level, but early on the difficulty is quite great compared to the arsenal at your disposal, and it may take half an hour of trying and failing to progress through the very first level before you’ve accrued enough credits to then spend on improvements to your ship. Once your fire-rate, shot-spread damage output, or even your ship’s health have been improved (and there are a host of other upgrades too)  for the first time, you’ll feel the momentum of the game pick up in turn. With successful completion of a level you’re guaranteed some number of credits, determined by your end-of-level letter ranking, and these, on top of those you discover through exploration and combat will start to rack up quickly enough to soon reinvest in something else, and then something else again. Once Habroxia 2 picks up some momentum, which it takes a little while to find, it becomes really hard to stop, and the initial perceived difficulty of the game suddenly feels comparitvely easy.

Upon completion of the game, a feat reached having blasted through each of the game’s branching 18 levels, New Game + opens up, but suddenly doesn’t feel as overwhelmingly difficult as the first time you took on the game’s first level, as well as a Boss Rush mode, a Boost Rush mode, while the temptation to go back and unlock every piece of equipment is also there for you too. There’s not an enormous amount of content here, but there’s no fat on the bone either. Everything feels considered and meaningful, and designed to challenge you in new ways, whether that’s the fight pattern of a certain boss, or the pairings of certain enemy types that drive your flight or combat styles.

As well as many of the enemy types returning, so have their sprites. Lillymo hasn’t done much to refine or improve the enemy models in the sequel, but the retro style still holds up strongly even a few years on from the initial game’s release. The environmental diversity has improved significantly though with the game taking you through more varied parts of planets and their terrain to change things up a bit. The soundtrack is really strong, and though the game isn’t a rhythm game, it still has the potential to get you moving and shooting in synchronicity with the beat – it was a mighty impressive feat.

Where Habroxia tried and failed previously, Habroxia 2 excels. The game has made just the right decisions to turn itself into the top-tier retro-styled SHMUP that it’s predecessor had aimed to be. Not everything hits the mark with some early difficulty/finance balancing issues, some cool, but recycled sprites, and a relative lack of end-game activities to engage with, but overall, Habroxia 2 is well designed twin-stick SHMUP that is well worth trying out.

Habroxia 2 was provided to Player 2 courtesy of a PS4/Vita code from LambSmith PR on behalf of the developer. It must also be disclosed that one of Lillymo’s studio heads, Colin Moriarty, has been a guest on Paul’s game-developer podcast Dev Diary. This had no bearing on the review and the score issued to the title.