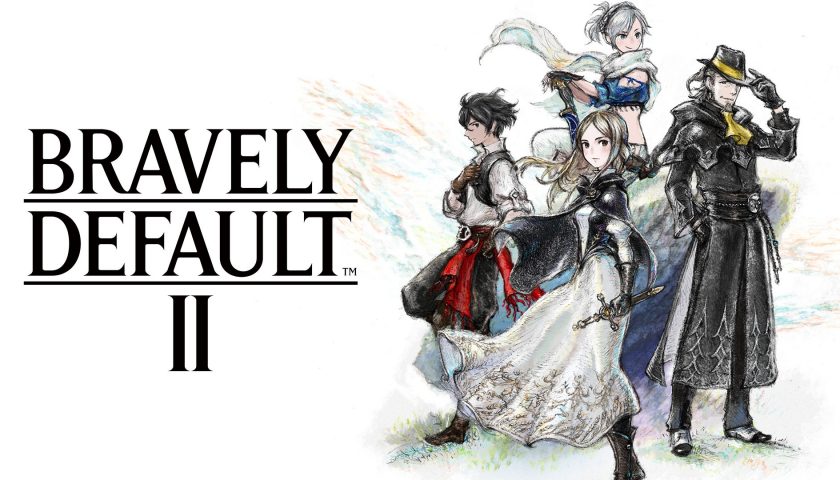 I feel traumatised by barrelling through Bravely Default 2.

The only comparison that I can draw is catching up with the friend that you made on a Contiki tour in your twenties that you shared everything with, in a whirlwind acclimatisation of your friendship-psyches. Thinking of those times fondly becomes part of your identity, so when that friend turns up on your doorstep with a bottle of whiskey and a bag of popcorn you can’t help but feel that instinctive need to revitalise those memories with the same momentum of your first meeting.

Of course, the Bravely Default formula has always invested in that essence of nostalgia – from the overarching JRPG high-fantasy allegory of a quest to reclaim the four elements (and in turn save the world from an overarching evil), to the easy-to-pick-up character archetypes (representations of the urchin/wanderer, the royal, the sage and the soldier). In any other game, the similarities would be grating, but in Bravely Default 2 they are delightfully cosy as our travelling party quickly acclimatise to their task and each other. And we similarly acclimatise to a picturesque world of gorgeous “painted” landscapes that somehow compliment the chibi-esque character models in the game. It’s hard to hate this world, and my pragmatism had parked itself in another room to watch Netflix, leaving me to be blissfully content in the world before me.

The game centres the quest for each elemental crystal in a town or kingdom, which sounds deceptively simple on face-value until you remember that this is a Bravely Default game and “narrative simplicity” is just not the jam that is spread on this pikelet. Each of these locations is a beautiful aesthetically-pleasing diorama that literally shows the excess of a particular element, but then turns the pursuit of solving its crisis into a series of character-driven mini-scenarios that vary from political intrigue to religious cults to just bare-bones tragedy. There is a lot to unpack in these chapters, and further to this, side quests provide opportunities to engage with townspeople and areas across the open world frequently, with an implied necessity to return to each town hub routinely to see if other side quests have unlocked. To balance the ensemble of NPCs that need their tales told quickly and the amount of map traversal, the “Party Chat” endeavours to flesh out more of the interactions and motivations with the party. For ease and portability, all cut scenes and Party Chats can be skipped at the time but revisited at a more convenient time for you in the Travelogue. Curiously, while we were afforded a world map, the game chose to not have a map in the dungeons.

To be expected, the main storyline has the usual twists and turns and the promise of post-game content that I am still trying to get my head around, and I am hoping that the world post-credits will be one of overwhelming promise and game-breaking overpowered combinations.

For me, the two other components that have always maintained my interest in the series is its strategic combat mechanics and its desire to champion passive progression in some form. I needed those to really feel at home again in Bravely Default, and both of these elements were a nice little surprise. The Brave and Default system is a tactical bedrock for the development of jobs that encourage you to utilise a myriad of battle currencies (using Brave Points, Magic Points or even your Hit Points to land strong attacks or necessary buffs). The big difference this time is that the party and enemy actions are determined in the turn order, rather than tactically planned at the beginning of the encounter where you used to hope like nuggets that you managed to wipe the enemy party in the first turn. I recall finding this jarring during the demo, but not as big a concern during the main game – next-character turns are nominally highlighted so that you can attempt to wipe out that creature before its takes its turn, which is a bit of a nice refresh to the old formula.

Similar to previous, you can have your main job that is levelled up when you defeat enemies, and a sub-job that does not receive Job Points when you defeat enemies, and benefit from the passive abilities of both using a point-buy system. The main characters lend themselves to rather stereotypical roles, but I found myself taking the well-rounded Seth and turning him into a heavy-armoured damage machine to compliment Adelle as dual-wielder of either fists or daggers so that I had two physical-attack units while Gloria and Elvis utilised more magicks and buffs. This time, the acquisition of Asterisks to unlock more jobs is a lot more on-the-nose (the party are literally bounty-hunting them so there is more of an incentive to catch them all).

Gone are some of the quality-of-life grinding improvements that we enjoyed in the 3DS titles, such as autobattle and encounter-rate sliders, which have now been replaced with a “baiting” mechanic that encourages multiple encounters with foes of particular types. It has refreshed the manner in gaining bonus Job Points, but I lament the loss of an autobattle mode like what is used in Dragon Quest XI and what helped me to pass the time in work meetings levelling up my party in Bravely Default and Bravely Second. The closest is the ability to repeat your previous round’s actions, but it reduces the input lag instead of having a flow automation when you are wanting to grind XP. Given the enemies have definitely kicked up their difficulty a notch from previous titles, I often felt like I was just a little bit under-levelled, carrying a freezer-box full of ethers and HP Potions to get through a majority of boss battles. Square Enix reinforced their decision to remove the essence of the random encounter by making enemies visible in the map and able to scurry away if you are over-levelled (resulting in additional time being whittled away from you if you choose to chase those scaredly-ass enemies down to grind for XP).

In the end, the passive grinding of the Boat Exploration seems to be the place to find the most promise of additional experience and Job Points to boost your party. While I experienced it offline with “nominal” stand-in characters, the idea is that players will be able to encounter each other similar to Streetpass, and go searching for treasure together while the Switch is in sleep mode, resulting in chests and vials filled with Experience Orbs, JP Orbs, or currency. Stowing some of the Large JP orbs allowed me to quickly level new Asterisks on my characters and unlock at least half of their active and passive abilities to try out, instead of farming mobs for bonus Job Points. I was genuinely curious how they were going to find a passive mechanic to rival the town-building and moon-base-building of the first two games in the series, and I am very glad to see this as the result to try and compensate the player for the lack of automation that we were afforded for battles and encounters previously.

In all, Bravely Default 2 has been the trip through my memories that I truly needed. The story is cliché in order to balance the complexity of the individual town dramas, the characters are stereotypical in order to slide into an easy rhythm of camaraderie, and the changes to battle and exploration are just different enough for the Nintendo Switch without being horrendously offensive to its predecessors. In the years that I tried to find solace for my yearning in other games like I Am Setsuna or Octopath Traveller, I should never have doubted that a return to the first JRPG that I truly enjoyed was going to be the only salve to the sequel that I always craved in the Bravely Default series. I have enjoyed every minute so far in Bravely Default 2 and I know I will enjoy every additional moment that I commit to the game as I allow myself to slow down into the steady rhythm of this mid-strength Japanese RPG.