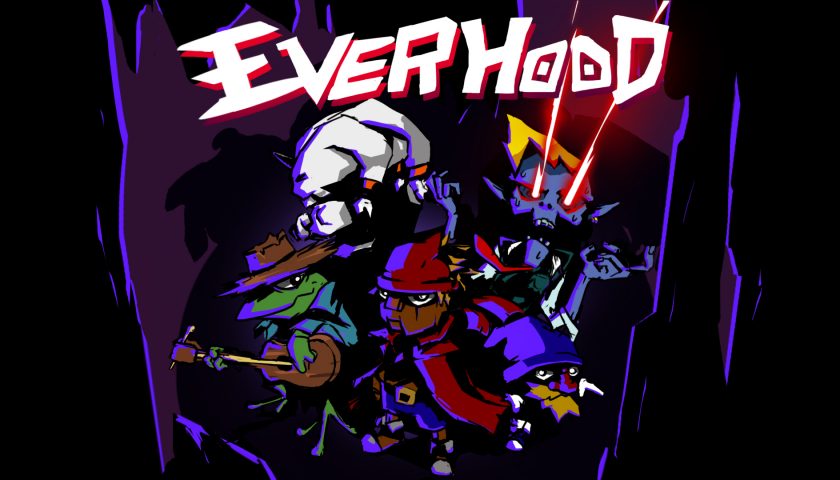 Undertale’s release in September 2015 altered the course of indie RPGs for years to come. With its underground lineage pulling from the likes of Earthbound and Homestuck, the game was primed to take the mantle laid before it and shatter the emotions of millions across the globe. The question of what comes next has prevailed ever since, and while I’m not sure if Everhood will be treated as such by the world at large, I kind of feel like it should be.

Building from the foundations that Undertale laid, Everhood is a 5-6 hour RPG (for one playthrough, at least) with an overworld full of colourful characters to talk to and background lore more sinister than at first glance. Where Everhood differs mechanically from its predecessors is in its battle system. Rather than the typical turn-based fanfare, Everhood riffs on the bullet hell structure with a more musically focused approach, laying out a 5-lane Guitar Hero style track pulsating with musical notes and furious dance moves of the character you’re matched against.

It’s not fair to call Everhood a rhythm game though. To do so would imply that you were trying to match the music with your button presses – doing so will cause you to go down spectacularly fast. No, Everhood is more of a reverse rhythm game – to survive, you’re instead dodging and jumping over the incoming symphonic barrage. It’s an important distinction – it flips your idea of what’s conventionally expected when approaching this type of game. More on this later.

The mechanic itself is both fun to master and incredibly well built on throughout the game. Not a single time is a battle a slog or uninteresting. To expand upon this would be to spoil some of the most visually arresting sequences as well as some of the clever contexts it’s playing in, so I’ll leave that for you to discover – just be aware that the warning around flashing lights at the beginning of the game is legit, and if you have any trouble with this type of thing, take it seriously and look into the accessibility options the game gives you.

Not to be all “now here’s the part where we talk about the graphics and sound” section of this review, but I’m sorry, I have to gush. The absolute visual and auditory splendour that is the battle sequences in Everhood can not be understated. It’s worth the price of admission alone to simply experience the mushroom sequence in the first hour or so of the game.

Though most tracks are electronically focused, beats are pulled from a wide array of genres and styles. There’s not a single track that’s sub-par, elevating every single battle. Even in the most basic of battles, the neon glow of rainbow notes streaming toward you are a wonder to behold – and when things go up even half a notch, it gets wild.

There were several sequences, from the beginning right up to the very end, where my mouth literally hung agape, while I uttered more than once, “whaaaat is even going on????” in the best possible way. It’s the closest I’ve come to experiencing the fabled synesthesia in any game. Turn the lights off, put this up on the big screen and let it wash over you.

It’s impossible to approach Everhood without talking about Undertale. From the tremendous music to a base visual design to the way characters have their own sound effects when speaking (not to mention the very font being used as the text rolls across the text box) the comparative identity is strong. This is deliberate, almost as if Everhood’s creator is attempting to draw in Undertale fans to talk to them specifically – only then to shift the dialogue in an entirely new direction. It isn’t necessarily the similarities that give Everhood a base appeal; it’s in the differences that elevate it beyond a simple Undertale fan game.

To go deep into this idea is an article for another day, but on a broad level, Everhood represents an almost antithesis to Undertale. Instead of a homely world filled with detail and boundary, you’ve found yourself in a world of negative space, with points of interest connected by sparse paths and inter-dimensional doors. Both games have a strong musical prowess, but the differentiations are important – Undertale’s battle themes are well-curated loops, whereas Everhood’s each have a clearly delineated beginning, middle and end. The aforementioned battle system flips the script on current conventional wisdom – you know what guitar hero is, and this looks like this, but it’s a different thing entirely.

It is important to stress however that knowledge of Undertale is not in any way needed – Everhood is very much its own game with its own ideas, themes and world. In the same way that Undertale is completely separate from Earthbound, so too is Everhood its own creation. There’s just simply more than an inspiration behind this game in Undertale. Everhood is very much in conversation with Undertale, from its philosophical response to the underlying messages of its predecessor to the ways in which the fan base around that game have built up their own terms around how it is played. There’s no requirement to have ever touched Undertale, but it’s endlessly fascinating if you have.

The subsection of games covered by “Indie RPG” is extensive but despite the sheer number of them available it’s still rare to find those diamonds in the rough. Everhood has a similar story to many you’ll hear – a passion project, brought to fruition after years of hard work. Its inspiration in Undertale is clear, but this never holds it back from standing on its own merits. What a visually intense, aurally stunning, philosophically charged experience – and possibly one of the best games of the year.

Everhood was reviewed on the Nintendo Switch with code kindly provided by the publisher.