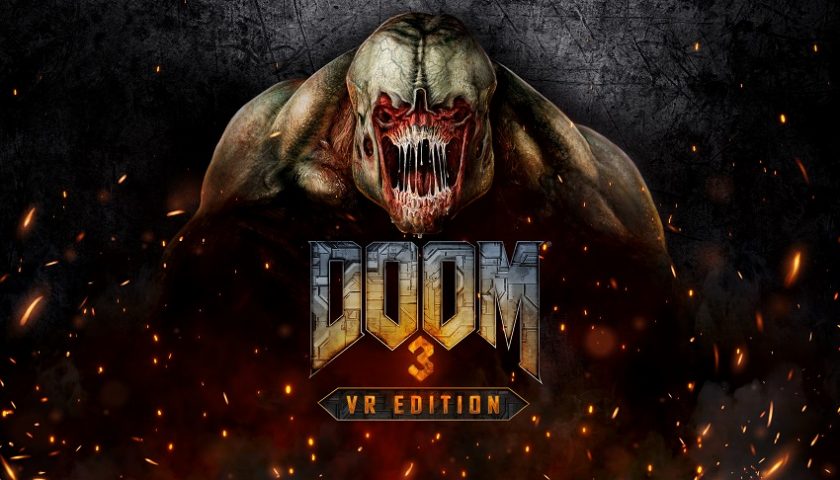 For many, the fantasy of VR has always been to take a leap into that alternate reality, delivered in that most immersive way: a highly responsive, first person view, in which you can live out your wildest fantasies.

So when the opportunity came up to review Doom 3: VR Edition, I couldn’t help but be curious to see just how Doom 3 would be transformed. Especially with its more deliberate pace when compared to the games which came before and after it.

For those who’ve not played the original, Doom 3 pits you inside the boots of a Space Marine deployed to Mars to help bolster up the personnel supporting the research of the good old Union Aerospace Corporation.

I’ve always appreciated the game’s opening and how it demonstrates the slower pace by giving you a snippet of the facilities as you take up your first assignment: locating a scientist who has gone walkabout.

Once the inevitable happens, the base’s layout, with its tight and twisty corridors means you won’t be battles hordes of enemies at once, but rather… you’ll be dealing with more focused encounters, consisting of no more than one or two of them at a time.

When playing the original release, I remember being disappointed with this, but revisiting it all these years later? I feel the move to VR greatly benefits the pacing, as the lower numbers of enemies encountered, combined with the controls mean it’s far more forgiving than you might expect.

The controls are split between using the PSVR headset to look around the given area, and your DualShock 4 to move about, interact with the environment and aim with your weapons, which is why the slower pace is beneficial.

At first, I found aiming by moving the controller felt clumsy, but with some practice, and the laser sights some weapons offer… you’ll be gunning down demons with the best of them. If you’re lucky enough to have picked up a PlayStation Aim controller? Then you’ve got the option of using that – sadly I don’t, but I imagine holding a gun to work far, far better than just a gamepad for this.

When it comes to looking around and moving? It’s something that will make, or break the experience for you. I spent some time getting things set right, and doing this is highly recommended, lest you find yourself falling ill.

Part of that is down to how rotation is handled, as once you’ve turned your head as far as it can go, you’ll need to rotate the character to see more. I appreciate the options available to tune how this works, whether adjusting the angle of each rotation step, and making the rotations happen instantly, or done smoothly.

When it comes to the general exploration of the facilities, something I found seriously helpful was your flashlight being attached to your weapons, as in the BFG edition over the original game’s separate flashlight. Though some may not approve, I believe it was the right move, making those moments as you sweep your flashlight across the room that bit more tense as a result.

For the things which Doom 3: VR Edition gets right, there are somewhere it doesn’t quite nail it. The first of these is with the game’s cutscenes. As many of these take place from a third-person perspective, they’ve been implemented in a 2D cinema-style view. It works, and I can see why it was done, but it does shatter the illusion of being in the game as you’d expect.

Whilst it’s an annoyance for cutscenes, I found the transitions far worse when dealing with your PDA, particularly because you’ll be switching to it frequently throughout the game. Though it works fine as a 2D view, I found it a bit of a sticking point because of how your HUD is handled – where each gun includes a readout for its ammo levels, and your current health and armour stats are presented on a wrist-mounted display.

This is one of my favourite features, and it might not seem like much… it seriously contributes to that sensation of truly being there, which shows where VR can really expand the play experience. When done well of course.

This is basically how I feel about Doom 3: VR Edition. Once you’ve dialled in your preferences, the sensation of being trapped on Mars is outstanding. The slower pace works wonders, especially with the focus on that sci-fi horror experience over the out and out carnage the rest of the Doom games offer.

Though there are moments that take away from it – in the form of cutscenes and PDA use, it’s not enough to truly detract from the overall experience.

Where you might find aiming weapons clumsy, particularly if using a gamepad at first, but the inclusion of laser sights works wonders for helping get used to them and becoming effective enough to deal with the nasties coming their way.

Though not a totally flawless reworking, it’s one I’ve enjoyed diving back into – especially as someone who never really fell in love with the original 2004 release. Whether you’re a veteran of exploring this Martian base, or someone new to this chapter of the series, if you’re after something different for your PSVR setup, then Doom 3: VR Edition is well worth considering.

Doom 3: VR Edition was reviewed on the PSVR with code kindly supplied by Bethesda Australia