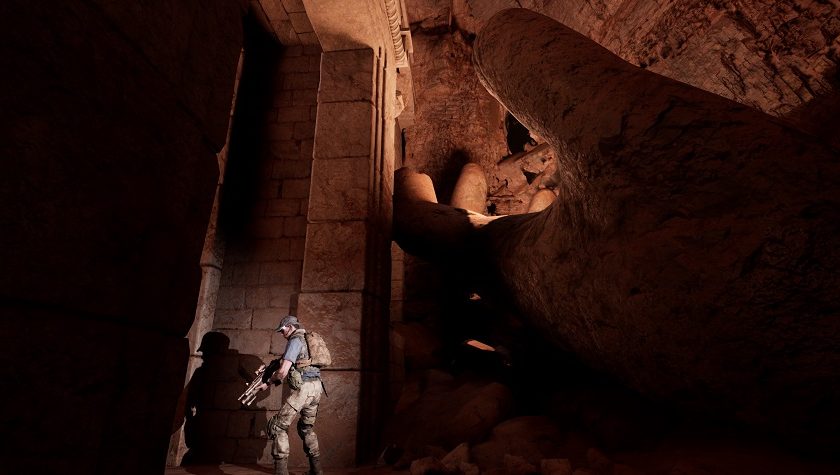 The Dark Pictures Anthology is something truly unique in the world of Horror games. Interactive horror titles that often share more in common with a “Choose your own Adventure” novel than a traditional video game, the series has earned itself a dedicated fan base that eagerly laps up each successive title. House of Ashes is the next title in the franchise and I was lucky enough to be able to watch a presentation from Will Doyle from Supermassive games and learn more about the latest entry.

The setting for House of Ashes is the tail end of the second Iraq war in 2003. A group of US soldiers get into a firefight with some Iraqi militants when the ground collapses beneath them. Once the dust settles they find themselves in an ancient temple and that’s where the scares start. House of Ashes uses the ancient legend of a Mesopotamian ruler who declared himself god-king and in the process brought a curse upon himself and his people. It is this ruler’s temple that the team find themselves in and as you can imagine, things go south rather quickly.

A host of new things are coming to the House of Ashes that haven’t been seen previously in the series. The most notable of which is the 360-degree camera. The fixed perspective of the previous titles has been replaced with something that is more similar to a 3rd person action title. Players can use their torch to examine the cavernous structures for clues and information along with having a greater sense of where they are heading, something not always easy to tell with fixed cameras. As a result, it seems to me that House of Ashes seems more like a traditional game than the previous titles, which should please people who found the lack of control in previous games annoying.

During the presentation, we got a brief look at the monsters that are roaming through the caverns. From what I saw they are appropriately nightmare-inducing. Something of a cross between HR Geiger’s Alien design and the creatures seen in the Descent. In fact, these were two of the movies that Will Doyle credited as inspirations for the game’s mood. The creatures were all created with extensive motion capture so movements should be realistic and add to the terror that they are trying to instil.

A big part of the Dark Pictures Anthology has been the joy of playing through the games with friends and House of Ashes looks to embrace that even further. With four main modes, including the standard mode, an online co-op mode for two people, a party mode that caters for five people on the couch and a special curator’s cut of the game which tells the story from different perspectives (and is only available as a pre-order bonus). So however you like to play these titles, it seems you are well catered for. These games are the perfect community experience so I can imagine fans out there are going to make extensive use of the party mode.

House of Ashes is coming to the next-gen as well with all the bells and whistles for those lucky enough to be in possession of a Series X or PS5, but the game won’t exactly be ugly on the older consoles. One thing the Dark Pictures Anthology is well known for is the wonderful video game representations of the actors used as models for the game. In House of Ashes, the cast is lead by prolific TV actor and High School Music star Ashley Tisdale and her in-game avatar looks fantastic. This is going to be a good looking title, no matter which system you play it on.

After my time with the presentation, I am actually quite keen to check out the final product. I wasn’t 100% sold on the idea of the Dark Pictures Anthology, but as each title keeps getting better and better I have been drawn in and can’t wait to take the latest title for a spin.