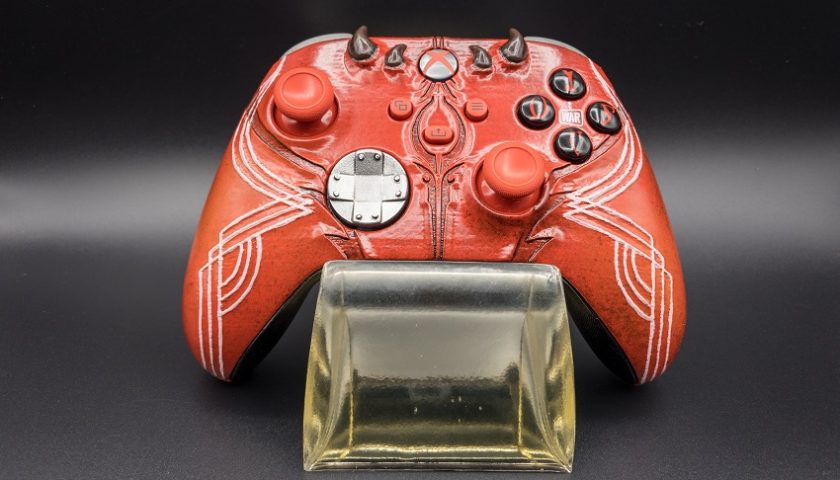 Take on ESO With Oblivion in your Hand

Elder Scrolls Online is making sure that everyone knows they are heading back into the realm of Oblivion this year with some amazing product tie-ins. Firstly we had the Hot Sauce of Oblivion ( of which you can possibly win a bottle here:) and now we have one of the most amazing controllers to ever grace your PC/Xbox.

This custom creation from Adelaide’s We Are Robots and there is no doubt it captures the demonish appearance of the Deadric Prince of Destruction. It features fours horns, scarred and charred skin, crimson thumbsticks and Deadric lettering on the buttons. It also features the iconic Ouroboros logo on the back, a nod to the three factions who are constantly butting heads over control of Tamriel.

In a recent press release, Alex Kemp from We Are Robots said “The Elder Scrolls Online is a legendary game and it was an honour to be able to create a controller for the exciting new Blackwood chapter. Working closely with the Bethesda ANZ team we designed the controller to capture the look and feel of Mehrunes Dagon, as if the controller had just arrived through the Gates of Oblivion.”

“The controllers were created using some of We Are Robots’ most advanced production techniques to give them a 3D physical appearance that you can touch and feel but won’t hinder the use of the controllers. Each controller is hand-painted and detailed to bring them to life, making them the perfect display piece for any Elder Scrolls Online fan.”

Want to get your Oblivion-loving mitts on one of these bad boys? Well the social media teams of Bethesda ANZ and Xbox ANZ have 10 to giveaway and the only way to win one is by following them, so get to it. ESO Blackwood, the first chapter of the Gates of Oblivion saga is available now on PC and on June 8 for console.